Kelly Van Nelson contributed to the Authors For Fireys fundraiser in January 2020. This mammoth undertaking was organised by Emily Gale and Nova Wheetman. They raised $513,149 to support firefighters and to help Australia’s bushfire survivors.

Kelly was a guest on DMZ’s podcast, which is also available on all good podcasting platforms.

Kelly Van Nelson is a bestselling author from the North East of England who lived in Edinburgh, London, and Cape Town before relocating to Australia. She has had numerous poems, short stories, and non-fiction articles featured in publications in the UK, USA and Australia. Her work featured in newspapers such as The West, Daily Mail, Peninsula Living, Daily Telegraph and Manly Daily. Channel 7 News, ABC Radio and  the Today Tonight Show have featured Kelly speaking about cyberbullying. All Gold Logie Award Nominees received gifts of Graffiti Lane at the TV Week Logies in 2019. Graffiti Lane also showcased at the 2019 London Book Fair and Crom Castle Serenity Press Author event launching to the Irish market. The Newman Agency represents Kelly.

I am a novice card maker but I made the pictured card. This is a thank you to Kelly for appearing as a guest on Dark Matter Zine and for supporting Australia’s firefighters. 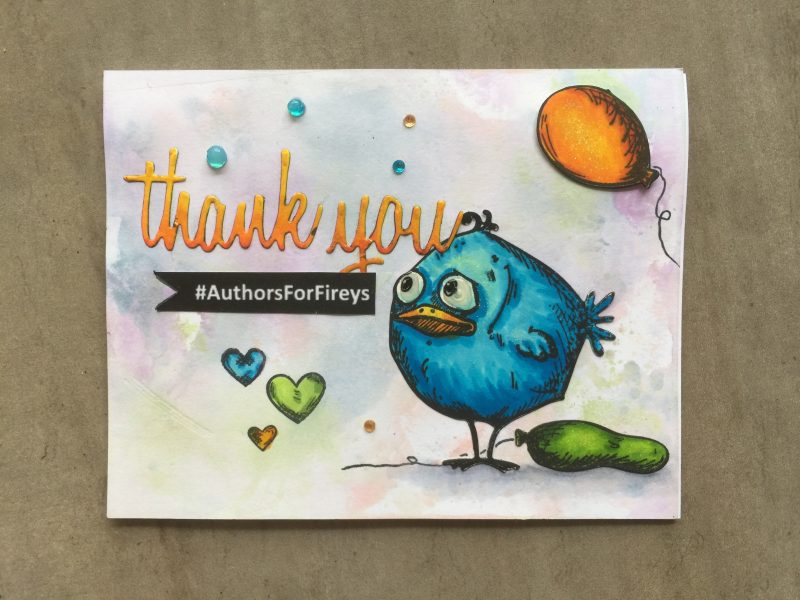 I love Tim Holtz’s ‘distressed’ look and his ‘crazy’ series so some cards featuring these products were inevitable.

The background is VersaMagic ink applied to Neena 80Ib cardstock (sorry, I have no clue what that is in gsm). I put the ink on a media mat, applied lots of water and dipped the card in the water to get pretty semi-watercolor ink effects. The bird, balloons and hearts were all stamped, colored with copic markers then die cut out before adhering to the card. Then I die-cut the ‘thank you’, added a little color to give it variation and inked around the edge. Finally I glued the sentiment and ‘gems’ to the card and drew in the balloon strings.

I’m not a fan of the gems: they can look good when others do them but not me. This is a GOOD thing because they’re plastic. If I don’t use them, I’m helping the environment! I’m also looking at all the crafting techniques to see where I can develop more environmentally-friendly cards and card-making processes.

Thanks for dropping by and thank you to all the card makers whose blogs and videos inspired me.