For 17 years Keelen Mailman lived and worked on Mount Tabor, a cattle station subject to Native Title. Mending and building fences, putting out salt licks for the cattle, protecting sacred sites and teaching the next generation, Keelen was busy. She was also instrumental in a 7 year struggle to reclaim Aborigine bones from a museum to return the bones to the land. Keelen is an experienced advocate for her people, both the living and the dead.

I talked to Keelen the day after Budget 2014 announcement mentioned in the above podcast.

Keelen welcomes us in her language, acknowledging the Traditional Owners of the land.

She talks about her life and her hopes for the future. Passionate about protecting sacred sites and building bridges with non-Aborigine farmers, Keelen explains Native Title co-exists with farming rights. Even in this interview Keelen advocates for her people, passionately calling for awareness of issues, arguing against changes watering down anti-discrimination legislation and calling for better – not worse – healthcare for Aborigines.

In her autobiography, The Power of Bones, Keelen shares her story. She grew up in poverty in rural Australia. After surviving childhood sexual abuse and adults’ drug abuse, she aims to build a better future for herself and to strive for a better future for her people. Although Power of Bones is ghost written, Keelen’s voice is strong, talking as if we’re sitting at her kitchen table sharing coffee, Keelen telling it like it is.

Power of Bones was published by Allen & Unwin, which sells paper books from the website. Ebooks are available elsewhere: I found Power on Amazon, for example. 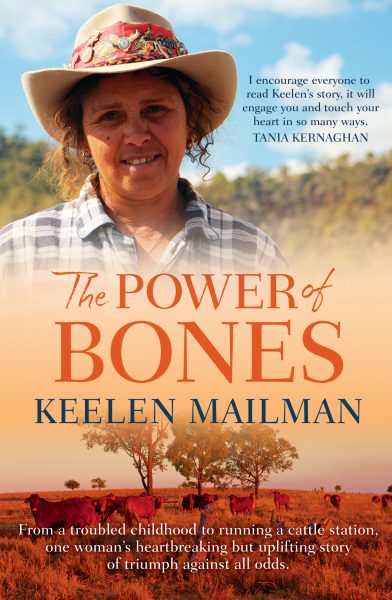