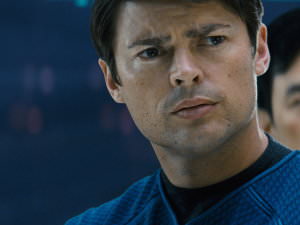 Last year in a panel at Armgeddon in Melbourne, Karl Urban declared that he would no longer be doing science fiction because he’s ‘done that’, and he felt it was time to move on to projects in other fields.  The audience was very quiet.  I’m not sure how Urban thought a geek pop-culture audience would feel about that particular brush-off’; Karl was less-than-urbane.

Never say never because, you know, shit happens and you might just change your mind.

The futuristic thriller, penned by Abrams’ Fringe colleague J.H. Wyman, is being billed as an action-packed buddy cop show set in the near future, when all LAPD officers are partnered with highly evolved human-like androids. Urban will play John Kennex, a respected police officer who has shut down emotionally after a tragic mission left him critically injured. He is paired with Dorian (Common Law‘s Michael Ealy), an android detective who, ironically, has a better grasp of humanity than he does. The cast also includes Minka Kelly (Friday Night Lights), Lili Taylor (Six Feet Under), Michael Irby (The Unit) and Mackenzie Crook (Pirates of the Caribbean).

TV line KNOWS NOTHING, JON SNOW.  They finish with:

Urban will next be seen reprising his role as Dr. Leonard “Bones” McCoy, in Abrams’ Star Trek Into Darkness sequel. He’s also known in genre circles as Éomer in the second and third Lord of the Rings pics.

And Karl: next time you flap your yap telling us you’re over our genre, THINK TWICE. I’m sure you’re laughing all the way to the bank, but still… be nice to the fans.