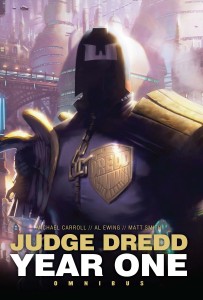 Judge Joe Dredd’s first year on the streets as a full-eagle judge.

Bred for justice and trained in the law; Dredd’s no helpless rookie. But he’s not the seasoned veteran we know either…

Three iconic Dredd writers – Carroll, Ewing and Smith – are brought together for the first time in Judge Dredd: Year One, the first print omnibus collection in the new series from Abaddon Books.

The brutal murder of a Justice Department-sanctioned spy uncovers something new and dangerous in the sectors’ murky black market. Unless Dredd can stop it, chaos will be unleashed.

“Writer Matt Smith has a fantastic handle on the chaos that is Mega City One.” – comicvine.com on Judge Dredd: Year One #2 from IDW

A savage killing spree results in the death of two highly-regarded Judges, and many consider Dredd to be responsible: a decision he made five years earlier – while he was still a cadet – has come back to haunt him.

“Both Carroll and Smith totally capture the character before he became the legend, and both authors deftly capture the internal monologue of the very stoic Dredd.” – SFX.com on Cold Light of Day and City Fathers

“Wear iron, that’s the rule.” Paul Strader is a stick-up man, and a toned cold professional. But when he gets in over his head, he has to risk everything on the word of a corrupt lawman, and break every rule he has. Every rule but one.

“This is cold, abrupt, driven Dredd… This is Ewing channelling the very best of John Wagner.” – FP International on Trifecta

Al Ewing has been a Judge Dredd aficionado since the age of nine, and is best known in the UK for his work on Dredd in 2000 AD, where he also co-created Zombo and Damnation Station. He has also written a number of critically acclaimed fiction novels for Abaddon and Solaris Books.

Matt Smith is the Editor-in-Chief for 2000 AD, he has written a series of Judge Dredd Year One comics for IDW; this is his second book for Abaddon.

Meteor is one year old in two days. He moved in with us in February after being rescued from the streets and malnutrition by @canberrapetrescue. He’s still timid: I’m sure he had a bad experience before he was rescued, but now he’s spoilt rotten and a little overweight. Instead of keeping their kibble bowl full we started rationing their kibble. Since then I think he lost a little fat and has grown even more. He loves games, allows pats and tries to open our door during the night because he wants snuggles and pats on our bed. We compromise: he can come in after 6am. #cats amiright?

Aurora turns one in three days. This is her today, after pointedly knocking the brush off the tv unit. @canberrapetrescue #cats #catsofinstagram