Warning: may contain traces of snark

A boy (Matt Lintz) dressed in antique clothing plays with a girl (Summer Parker) who appears to be in 21st century dress. The girl disappears and a horned rider chases him into the road. He collapses in town and becomes a John Doe so Mills (Nicole Beharie) and Crane (Tom Mison) look at him to find the boy speaks Middle English.

Crane is cute in his indignant recitation of the origins of the term “John Doe”.

The CDC rock up to inspect the boy whose veins are turning black.

Crane talks to the boy via video link who says he’s Thomas from Roanoke. Apparently there’s a missing colony from the 16th century.

Thomas is contagious: the EMT (the ambo for us Aussies) and the nurses are showing signs of infection and are deteriorating fast.

The EMT sees the horned rider coming for him as he dies. I guess the horned dude is Pestilence because we know Death is the headless guy.

Crane finds a spider web “broken at about Thomas’s height” but have you ever seen such a neatly severed web in real life? [headdesk]

Morales is making calls because he doesn’t like Crane hanging with Abbie. Nya, nya, nya, he’s about to learn that Crane hasn’t been in modern Oxford. Then he’ll hit a brick wall. [You may get vibes I don’t like this guy.]

The girl left footsteps yet Crane says “Perhaps she was never even here to begin with”. How do you figure?

After losing a stick that looks like someone underwater grabbed it, Crane casually walks across a hidden crossing with barely an inch of water.

The colony is hidden on the island and all the people have the plague but don’t seem ill.

Pestilence rode through the colony, infecting them. Virginia, a dead woman, led them to the island to survive.

They keep repeating what we already know. And stating the bleeding obvious like “We must prevent this at all costs.” Methinks they had too much time and too little script for this episode.

A colonist offers Abbie a flower but she refuses. I wonder if that’s the cure? Later Mills and Crane talk about “something in the atmosphere” protecting them.

Crane has the plague from touching Thomas so Abbie yells for everyone to leave him alone — Why? — but the CDC suits hold him down and sedate him.

Crane goes to visit Katrina (Katia Winter), his wife, in another world. She says he’s “dead or near to it”.

Morales receives a call from a woman with a plum in her mouth confirming Ichabod Crane works in Oxford but is currently on leave. WTF?

Abbie argues with Irving to get Crane out of quarantine but he sends her to Morales to get orders. Smart: put the woman cop under her jealous ex.

Abbie ignores orders and sits in the chapel talking to a candelabra asking for a sign.

Crane is suddenly dragged backwards away from Katrina and wakes up.

Abbie talks to Irving about taking the sick to the colony to get the water. For no good reason, Irving is sold on the idea. He lets her take Crane and Thomas under the guise of a patient transfer. Once they near the colony, Crane and Thomas rise from the almost-dead and walk.

Abbie doesn’t take any precautions, she even touches Thomas barehanded. Abbie shoots Crane up with adrenaline then Pestilence rides by; you’d think Pestilence would have been enough of a stimulant without artificially adding adrenaline.

“You were right, the water provided a cure” although Thomas is still streaked with black veins.

Thomas turns out to be dead all along but was alive in Sleepy Hollow then Abbie’s faith provided a cure — for everyone who didn’t get wet. EVEN THOUGH ALL THE COLONISTS DIED OF THE PLAGUE.

There’s a deep and meaningful moment between Mills and Crane before we see Death emerging from yet another swim then riding through the forest leaving embers glowing behind him.

Minion says, “It is, isn’t it?” he says cheerfully. “IT’S BETTER THAN CONTAINMENT.”

Yet again the episode fails the Bechdel Test in spite of having a female lead character. However, for people of color this series rocks. 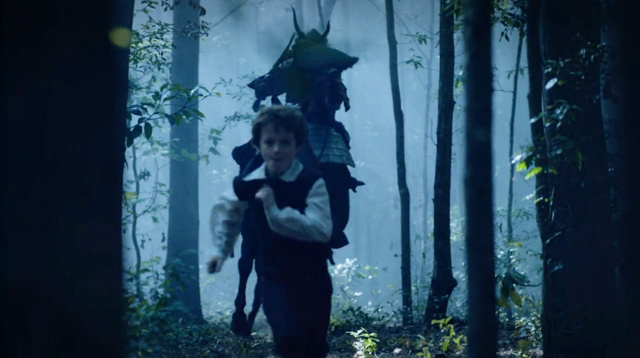