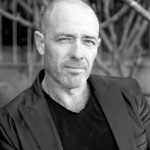 Meet John Birmingham, author of cult book and movie He Died With a Felafel In His Hands and The Axis of Time (the Philadelphia Experiment meets War Games meets Churchill). Snark-in-chief at Cheeseburger Gothic. JB wrote fire-breathing dragons from another dimension because he was pissed of with a different story about dragons. Now he’s written The Cruel Stars, a space opera where cyborg mutants fight Nazis. Just because.

Nalini Haynes talks to John Birmingham about The Cruel Stars, why Queensland Australia is well-suited to survive the zombie apocalypse and more.

Also, because HarperCollins got excited and sent TWO copies of The Cruel Stars, DMZ is giving away both the paperbacks. Details for the giveaway are below the video but the short version is:

email editor@darkmatterzine.com with ‘The Cruel Stars’ in the subject heading. The competition closes on 22 September 2019 at 5pm Canberra/Melbourne/Sydney time.

Random Penguins defines The Cruel Stars as Military Science Fiction but it’s so much more: pop culture references abound, McLennan is an MA-rated Scotty from Star Trek, the Liberator is a military vessel but another vessel’s crew is like that of the original Liberator…

HarperCollins Australia says The Cruel Stars is Fiction/Science Fiction/General, which is probably more accurate. Science fiction has a long history of being an enormous all-encompassing genre with references and homages to works that have gone before.