Joe participated in an email interview in 2010; this interview was published in the January 2011 edition of Dark Matter (issue no. 2) between Christmas and the New Year.  Below is that interview in text only.

UPDATE:   In November 2012, Joe Abercrombie spoke to Nalini Haynes via skype; that interview is available in MP4 (video) and MP3 (audio only) at this link. 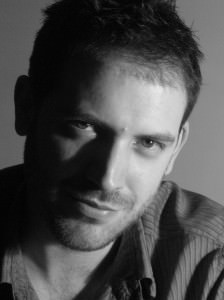 Thanks for agreeing to this interview for Dark Matter.

Your website bio implies that you were into games like Dungeons and Dragons as a youth, is that correct? Any other similar games or genres? Do you still play? I can’t see how you could play World of Warcraft (a computer equivalent of Dungeons and Dragons) much and still have time to write.

I played a cornucopia of Roleplaying games throughout my childhood and youth – D&D, Runequest, Rolemaster, Judge Dredd, Vampire, Warhammer, Traveller, the whole gamut, really. Stopped in my late teens when I went off to college and fell into a different crowd. These days I play a lot of video games still, but generally I’ve avoided the online side. I get a little tired of 12 year olds shouting “noob!” at me.

What led you to leave your dazzling career as a minimum wage ‘tea maker’ for a TV post production company to become a freelance film editor? And how does one freelance as a film editor?

I left because I fell out of love with tea-making, though I still drink a large quantity. The phrase “film editor” is perhaps deceptive, because most of what I worked on was TV – documentaries and live music mostly, concerts, festivals and events. Most editors in that business are freelance. It’s a modular kind of an industry. Typically I’d work for five or six weeks at a time on one project or another, have a week or two off before starting the next job. After a while I started to think I needed something more useful to do with this time than just playing computer games.

What inspired you to take up writing as a career?

Ever since my days of roleplaying and being obsessed with Lord of the Rings, I’d had some ideas for a fantasy epic of my own, tempered over the years by all kinds of other things I’d read, watched and experienced both inside and outside the fantasy sphere. So when I found myself with these blocks of free time, I thought I’d have a go at putting them down…

Are there any particular authors who inspired you, both to take up writing and more recently?

I guess you’re inspired by anything you’ve ever read and liked, which brings in a great and very diverse range of authors. Within fantasy I’d have to name-check Tolkien, of course, LeGuin, Moorcock, and most recently George RR Martin, whose Game of Thrones was a real revelation when I read it – demonstrating that you could do something dark, edgy, and unpredictable while staying very much within the best traditions of epic fantasy.

Was there any family member or friend who particularly encouraged you to go down this path?

My family have been a big encouragement throughout. My mother was an English teacher and then an editor, my father was an academic, so they both know a fair bit about writing and would have been scathing in their contempt had they thought my stuff was no good when I first plucked up the courage to admit I was doing it and show them a few chapters. But they were astonished to find it didn’t completely suck, and since then have tended to be the first people to read my stuff and give an opinion. Don’t think I’d have got as far as completing the first book without that encouragement.

Was it difficult to get your first book published? How did you go about it? Or maybe I should ask how did you get Gillian Redfearn’s attention?

I don’t think it’s ever easy to get a book published, but certainly I’ve heard of tougher journeys. Once I had a draft of The Blade Itself I was reasonably happy with I started sending samples out to agents who specialise in sci-fi and fantasy, and over the course of six months collected a few photocopied rejections.

You’ve had a trilogy and another stand alone book published before The Heroes. What would you like to tell us about them? (apart from the fact that we should read them)

You should BUY them. Reading is optional. The First Law is basically my take on the classic epic fantasy trilogy, my attempt to try and maintain the adventure, the magic and the mystery you expect from the format, but focusing on character rather than world, making the action fast, bloody and brutal, having a broad streak of humour among the blackness, and hopefully throwing a few surprises into the mix. Best Served Cold is a standalone set in the same world, featuring some of the same characters without being a direct sequel, and is my attempt to fuse epic fantasy, and the approach to it outlined above, with an edgy revenge story, set in a land of warring city states not unlike Machiavelli’s renaissance Italy.

What sets The Heroes apart from your previous books?

The Heroes is my attempt to fuse fantasy with a hard-boiled war story. Epic fantasy usually focuses on war to some degree, of course, but in this case I wanted to focus on a single battle, and make the whole thing very focused in time and place. An approach a little bit like epic films that cover single big battles, things like A Bridge Too Far, Gettysburg, Waterloo, that try and give a flavour of the whole event while also following a few individual stories within it.

How did you come to choose the setting of The Heroes? Why that time and place?

I guess I was looking for a place and a set of soldiers that could stand in for any war, in a way. I don’t want to write fantasy that feels archaic or arcane, I want it to feel relevant. Applicable. Even if you’re writing about pre-modern times, after all, it’s pointless to pretend you’re not writing for a modern reader. The North and the Union are two cultures within my world that I’ve spent a lot of time with in the past, are traditionally at odds and prone to war with each other, are sufficiently different in tone to create interest, and, ahem, I have a lot of characters left over from other books that felt worthy of further investigation. So the time and place suited, but I’d like to think it could be any time and place, really.

I found The Heroes had the ring of truth with regards to the personalities and their ineptitude conducting a war. Did you research historical wars to develop your story? If so, in what depth? If not, how much do you recall of history when you were at school?

Oh, yeah, I read an awful lot of history. In fact I read much more non-fiction than I do fiction, and military history has always been a favourite area of mine. One thing I was very keen to do with The Heroes was to contrast the quite shiny, clean, heroic idea of warfare you often see in epic fantasy, in which victory is often secured through brave and selfless action, with the much more random and confused picture you get from a study of the subject, in which victory more often derives from a strange and unpredictable mixture of heroism, cowardice, pettiness, stupidity, and blind chance.

The events of The Heroes take place in just a few days. How do you construct such a detailed narrative with so much action, fit it into such a short space of time and yet make it believable? Do you use storyboards? Are the walls and floor of your house covered in paths of sticky notes?

I plan pretty thoroughly and at great length. I used to use a lot of squared paper but I made a conscious effort with the last couple of books to move over to computer, since I can type a lot faster than I write, and dialogue that occurs while I’m planning can just be copied and pasted over. Efficiency savings, you know. Different elements develop in parallel, really, which is to say the action I want dictates the type of characters I need and the characters I have dictate the situations they get into and so on. But fundamentally I started off designing the battlefield, and thinking about what different classic battle scenarios I could cover – A bridge, a town, a ford, a hill, an orchard. Then I worked out what the action would be on each day, and how each character should be involved in order to both cover the action and develop their own stories and personality, as well as trying to get the paths of the different characters to intersect as often and in as many different contexts as possible. Then it’s a question of splitting those different strands into chapters and intercutting them. It is quite a complicated business, I guess.

Your website says you write ‘edgy yet humorous’ fantasy novels. The humour in The Heroes is very black, focusing on surprise when people die, for example. How does this reflect on your daily sense of humour? Are all your books that black? Do you have a lighter side?

In real life I am a lot more hilarious than my fiction, but slightly less violent.

Is there any plan to write a sequel to The Heroes?

Only in so far as all my books pick up some characters and themes from previous ones. There are a couple of characters from The Heroes appearing in my next book, in fact, and I’d be very surprised if others didn’t surface in future books.

Are you writing your next book yet? If so, what can you tell us about it? If not, why not? *cracks whip*

I’m planning and researching, I’ll have you know. Alright, I’m watching the complete Deadwood, Unforgiven, The Outlaw Josey Wales, Ride With The Devil, playing Red Dead Redemption a lot and reading a lot of classic and revisionist westerns. Can you guess what sort of book I’m planning to write?

How does your family feel about you writing? And everything that comes with that non-traditional lifestyle?

They feel honoured to know me. At least, I assume that’s why they laugh so often when I’m in their presence…

How old will your daughters be before you let them read your books?

Before I MAKE them read my books, do you mean? I reckon 16 is probably the cutoff. I mean, have you seen the language in those things?

Thank you very much for your time for this interview. Good luck with your future endeavours. I am looking forward to reading more of your books.

And I to writing them…