Below are the planned introduction and interview questions.

Joe Abercrombie spent much of his youth playing computer games, rolling dice, and drawing maps of places that don’t exist. He went on to Manchester University to study Psychology. The dice and the maps stopped, but the computer games continued.

A job as a freelance editor gave him a great deal of time off, however. Gradually realising that he needed something more useful to do than playing computer games, in 2002 he sat down once again to write an epic fantasy trilogy based around the misadventures of thinking man’s barbarian, Logen Ninefingers. This time, having learned not to take himself too seriously in the six years since his first effort as telling this story, he says the results were a great deal more interesting.

Since then Joe has written several books including The Heroes, Red Country, Half a King and Half the World.

The Heroes and Red Country have a very different feel to Half a King and Half the World; you’ve gone from Lord Grimdark to Youngling Grimdark. Why the shift?

The Heroes and Red Country are very dark, even making the moment of death humorous. The Shattered Sea books aren’t warm and fuzzy but they’re not AS dark as your earlier novels. How difficult was it to change the flavor of your writing?

Your early books are hefty tomes. Was it difficult to pare down your storytelling to a more slender form?

In Half a King you introduced a character with a disability. What inspired Yarvi?

Half the World features a teenage girl who wants to be a warrior.

You could be accused of ticking the PC boxes; what would you say to the critics?

Most men want to pretend female menstrual cycles don’t exist but you’ve gone to the other extreme. I wondered if you needed more blood?

@DarkMatterzine “What have you learned writing YA that you intend to apply to future “Adult” novels and stories?”

Your novels may be classified as fantasy but you don’t necessarily include actual magic; what are your thoughts on fantasy as a genre and genres as categories?

What can you tell us about your upcoming Half a War?

What other projects are you working on?

Thank you for talking to Dark Matter Zine. 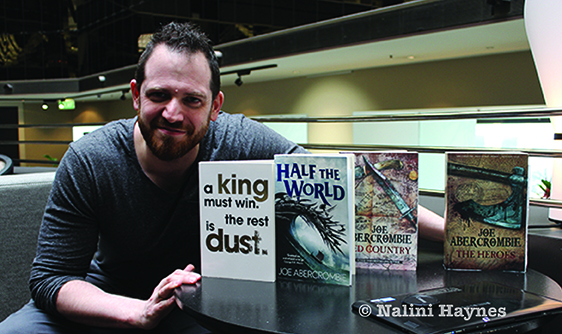