an Aurealis interview by Dan Allan 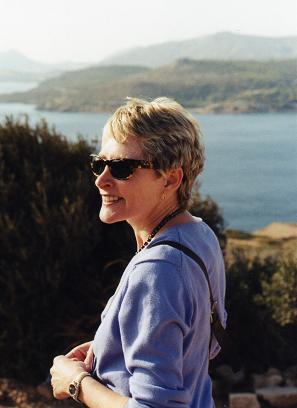 Jenny Blackford is an Australian Science Fiction and Fantasy author and poet who specialises in tales with an ancient historical leaning. For this interview, Jenny was kind enough to answer a few questions about the ‘classic’ classics, her writing process and the stresses of being a poet. Her story, ‘The Sacrifice’ appeared in issue #47 of Aurealis – Science Fiction and Fantasy.

Without giving too much away, what is The Sacrifice about?

It’s about Medea killing her brother, and chopping him into little pieces, to stop her father’s pursuit of the Argonauts after they won the Golden Fleece. We all learned about that as kids. She was the most famous witch in Greek and Roman literature, and everybody assumes that this episode proves she was totally heartless – a truly wicked witch.

But The Sacrifice is NOT just a retelling with different emphases.

Medea was the daughter of Aietes, the king of Colchis at the exotic far end of the Black Sea; he was the son of Helios, the Sun, and a powerful sorcerer and tyrant in his own right.

So, what would have happened if Medea had not killed Apsurtos?  Aietes would have killed Medea, Apsurtos and Jason in a flash, if he had captured the Argo. Medea sacrificed her brother to save the man she loved.

In all the variants of the myth, Medea is a priestess of the powerful, dangerous goddess Hekate, and sacrifice was a major part of the worship of all the Greek gods and goddesses. (I have a degree in Classics, and an unfinished Ph.D in comparative religion, so I think about these things.) I started to wonder, what if the death of Apsurtos was not merely a tragic necessity, but an actual religious sacrifice?

That’s what The Sacrifice is about, my brand new, never seen-before conception of what the killing of Apsurtos must have been: an appalling sacrifice to a dark goddess.

How important do you think an understanding of the ‘classics’ are to a fiction author?

The best poetry ever written was probably penned by (ancient Greek) poetess Sappho, with (ancient Roman) Catullus and (modern era Irish) Yeats as wonderful contenders. I doubt that anyone will ever write a play as funny and tragic and dirty as anything by Athenian comedian Aristophanes. And as for real tragedy, Aeschylus is your man. Homer’s Iliad is stranger and more wonderful than most people understand – it just gives us a few incidents over a couple of weeks of a ten-year war, but so terribly sad! The Odyssey is even stranger – lies upon lies upon lies from untrustworthy storyteller Odysseus.

Really, it’s impossible to understand any of the European traditions, even of the relatively recent past, without understanding at least something about ancient Greek and Roman literature, history and culture. And the more you understand, the better.

Apart from your fine self, are there any authors you think do ‘classics’ inspired fiction especially well?

It’s hard to go past Mary Renault for anything ancient Greek, and Rosemary Sutcliffe (oh, my teen self’s tears through The Eagle of the Ninth!) for Roman Britain. If I had to pick a favourite, it would be Renault’s The King Must Die and its sequel The Bull from the Sea, the tragic life story of the flawed hero Theseus and the people he loved, but that may be at least partly because I’m a sucker for the Mycenaean era (and the Aegean Bronze Age generally).

For those who like a bit more spec fic in their history, Gene Wolfe’s series Soldier of the Mist, Soldier of Arete and Soldier of Sidon are difficult but amazing. Robert Graves’s historical fiction is, like the rest of his work, brilliant but erratic.

I should disclose that I find Colleen McCullough’s prose sadly unreadable, though I believe the plots of her Roman novels are rollicking. I haven’t read Kerry Greenwood’s Delphic Women series, especially her Medea, because I don’t want to plagiarise her, however unconsciously; I’m sure they’re great. I haven’t caught up yet with Madeline Miller’s much-acclaimed retelling of the Iliad, The Song of Achilles, but it’s on the list.

What are your writing habits like Jenny? Do you write every day? To a word count? Or time?

I’m semi-retired, so I have the luxury of being able to write most days (though ageing parents are taking quite a bit of my time and energy these days). I’d love to write 3000 words a day, like so many people I see posting on Facebook or their blogs – but I’m just not that prolific.  I found I was actually best off giving myself a goal of 500 words a day while I’m in mid-story. That way, 400 words is still quite good, and if I’m on a roll and I make 700 or even 1000, I’m very happy with my progress. I do edit constantly as I write, which of course makes the process slower.

You are also a poet. Does the writing process change when you switch mediums?

Poetry is a far more unconscious process. Occasionally I wake up thinking about a poem and write it straight down, and it just needs minor adjustment afterwards. More often, it’s about a day a line – though not in a linear fashion. I might write a shell of a poem and gradually fill it in, or scrawl something unsatisfactory and slowly fix every phrase until I’m happy. But most of the words pop into my head while I’m thinking about something else, and I have to run back to the piece of paper, or computer, or iPhone, or wherever the current version of that poem is. Sitting at the computer staring at it is no help at all.

Do you find that you like stories or the poems more because of the process required to write them? Eg. do you enjoy the finished poem more because it was a more relaxed process?

Apparently I’ve given you the impression that writing poetry is relaxed. No! It’s an anxious, pernickety business, just like writing prose – but unlike prose, it doesn’t respond well to any conscious attempts to make it work. I still have to stare and stare and stare at the words – but the answer seldom appears in m mind unless I walk away. Or sit on the sofa with a printout and a pen, and attempt to cultivate a blank mind.

The best moment for enjoying my own work – poetry or prose – is when I look at it and it seems as if it was written by someone else, and I actually like it. The process for getting the words onto the page doesn’t matter. It might have been part of a painful 200 word failure on a 1000-target day, or a poem that sprang fully-formed from my brain, or a poem that started with a phrase that took three months to flesh out and doesn’t even include the starter phrase any more.

What are you working on at the moment? Are you allowed to tell us? (Note: Your sun-tan is a perfectly valid response to this question 🙂 )

In theory, I’m working on a fantasy for 10-12s, about a magical circus with a dragon and centaurs as performers. In practice, I’m finding it impossible to concentrate on that, though now and then I add a line to one of my myriad half-finished poems (then delete another line, and spend the rest of the day moving a comma then putting it back).

Do you have anything coming out soon?

I am delighted to say that I have a tenderly scary horror story in Ticonderoga’s extremely recent Bloodstones, edited by Amanda Pillar, a strange Near-Eastern mythic fantasy in Ticonderoga’s Dreaming of Djinn, edited by Liz Grzyb, and a Bradburyesque cat poem in Erin Underwood’s YA SF anthology Futuredaze, plus an SF story and three poems forthcoming in the wonderful old NSW School Magazine.

If you could live in any fictional story world, what would it be? (Feel free to place any provisos on the answer you see fit)

Hmm. That’s a hard one. Perhaps the Shire, during a century or two when the Rangers were doing an excellent job of keeping the hobbits safe and ignorant. Or maybe…

This post has more information about the recent partnership between Aurealis magazine and Dark Matter.