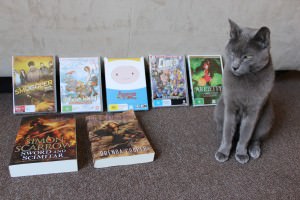 Smokey with items received on 4 December 2012

CATS aren’t supposed to earn their keep.  It is the role of all HUMAN SERVANTS to support cats in the LAP of LUXURY… [mutters and meows crossly] 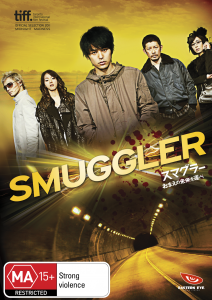 Smuggler is a Japanese action flick with what looks like elements of fantasy directed by Katsuhito Ishii and based on a manga by Shohei Manabe.  When I’m in the mood I quite like watching puny, uncoordinated humans pretending to be as graceful, lithe and agile as cats. 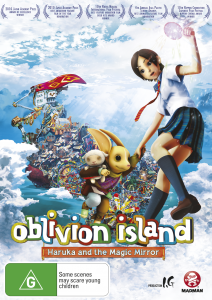 Oblivion Island: Haruka and the Magic Mirror is a magical animation along the lines of Shaun Tan’s Lost Thing and Mary Norton’s The Borrowers although it’s Japanese in origin, relating to Japanese folklore.

16-year-old Haruka is on a mission to find her mirror—a precious childhood gift from her late mother that has disappeared. On her search, she follows a strange foxlike creature to Oblivion Island, a mystical world overflowing with once-cherished items taken from their neglectful owners. Trouble follows Haruka and her new friend Teo at every turn as they contend with the island’s overbearing ruler, who will stop at nothing to use the mirror for his own sinister plan!

This internationally acclaimed feature film blends Japanese folklore and storybook charm reminiscent of Alice in Wonderland into an exhilarating tale sure to amaze animation fans of all ages.

I anticipate curling up on the servant’s lap to watch this as long as that bunny doesn’t make me too hungry. 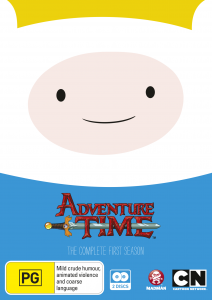 My former servant reviewed one of the Adventure Time releases here: it may have been It came from the Nightosphere (collection 2) because it wasn’t this one!  I wonder if this means the former servant will rush over to groom me whilst begging for this set.

Hmm, this could be very beneficial…

I might condescend to approve of this set BUT there is a DOG.

BEWARE OF THE DOG.

He should be evicted and replaced by a CAT. 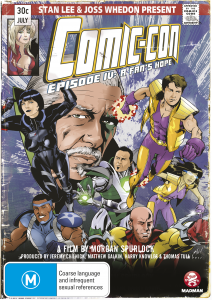 Have you ever imagined a place where Vulcans and vampires get along?

Who cares about Vulcans and vampires getting along?  Vampires wouldn’t like Vulcan blood anyway, it’d taste all coppery and yuck.  Enough to make you turn green. 😛

Where wizards and wookies can be themselves?

I seriously don’t care about wizards and wookies being themselves, but I wouldn’t mind curling up on a wookie on a cold day.  As long as the wookie doesn’t smell like a dog.  And it is clean.

Welcome to Comic-Con San Diego. What started as a fringe comic book convention for 500 fans has grown into the pop culture event of the year that influences every form of entertainment, now attended by over 140,000 strong.

But how many cats?  Come on, get to the IMPORTANT statistics.

COMIC-CON EPISODE IV: A FAN’S HOPE- a film by Morgan Spurlock explores this amazing cultural phenomenon by following the lives of five attendees as they descend upon the ultimate geek mecca at San Diego Comic-Con 2010

Meh.  Not enough cats in this one either.  Moving on. 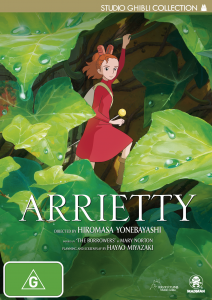 Arrietty is a Studio Ghibli anime based on Mary Norton’s Borrowers series.  My servant already reviewed this here.  My servant liked it.  BUT.  While I appreciate the cameo appearance of the cat, THAT CAT IS A LOSER.  Honestly, she should have CAUGHT and EATEN all the Borrowers YEARS ago.  And being made to look like a fool?  Not my favourite cat appearance.  FAAAR from it.  [sniff]

Sword and Scimitar by Simon Scarrow looks all warm and toasty for a cold day like today.  I’m not too perturbed by humans killing themselves, I just need a good cuddle or a nice fire to warm me up.

The Creative Fire by Brenda Cooper is inspired by the life of Eva Peron, so don’t cry for me Marj and Tina.

Who will get THAT reference? 😛

I am now exhausted and will need to curl up for a nap for at least an hour or two, or until the servant gets some meat out of the fridge.  Whichever comes first.