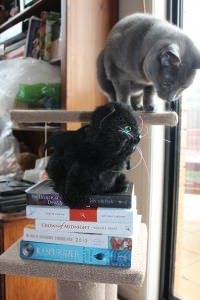 Smokey accidentally posed beautifully with Edgar Allan Purr and the items received before recollecting herself and moving on. Literally. I didn’t get the nose-to-nose pose, but I snapped this just before she lept off her post. (Sorry for updates in the mail – formatting this post has been difficult.)

Dance of the Red Death by Bethany Griffin

“Death is impossible and living is impossibly hard for 17-year-old Araby Worth, with her exclusive, decadent lifestyle surrounded by a plague-ravaged society.

A sexy, post-Apocalyptic reimagining of Poe’s gothic horror story of the same name.

It’s 1870 and a deadly virus has decimated the population of North America. Masked corpse-collectors roam the streets, removing the bodies before the contagion can spread. Though Araby tries to escape it all with drugs and parties, even at her most intoxicated she can’t forget her brother’s death – or her guilt for causing it.

But things begin to change when William, the fascinating proprietor of The Debauchery Club where she searches for oblivion, and Elliott, nephew of the insane dictator, enter her life. One wants her heart, and the other her name. Convinced that he has won over his uncle’s army, Elliott believes that having Araby on his arm will charm the populace into supporting a new government. After all, her father is the inventor of the mask which prevents the spread of the plague and saved civilisation – for those who can afford it. . .

But Araby’s greatest interest is that his plans will make protective masks available to all citizens and, in particular, to Will’s young siblings, whom she has come to love despite herself. But nothing is what it seems. A new contagion called the Red Death is sweeping the city and a shocking revelation about the origin of the new virus puts Araby’s life in danger.

The mob wants her. The rebels want her. And both boys want her. In this superb two-book series, what and whom Araby chooses may just decide the fate of humanity. . .”

This has piqued my interest. Bloomsbury says:

“On a frozen Cornish moor, a fourteen-year-old girl lives in a trailer with her dad and little brother. Ennor’s mother left years ago, when things started to go wrong – and gradually their world has fallen apart. Now her father’s gravely ill, school has closed, and Ennor knows they’re going to take her brother away if things don’t pick up soon. Days before Christmas, when the wind is cold and her dad’s health takes a turn for the worse, Ennor packs a blanket, a map, a saucepan and a gun into her rucksack, and sets off to find her mum and bring her home.

Ennor thinks she knows where she’s going. But this journey will change her life for ever – it becomes a battle for survival, a heartbreaking story of love and friendship, and a fable about not finding what you were looking for, but finding something more important instead . . .”

However, it’s the letter that accompanied the press release, talking about a sense of place and the author working with young people in an education arts partnership, describing the book as ‘heartbreaking, tough, funny and beautiful’ that captured my attention. I hope this novel lives up to its marketing.

The title sells itself. Stories and excerpts of the year’s best science fiction and fantasy. An author’s name that lept out at me from the cover: Amal El-Mohtar, the blogger who wrote an excellent article about N.K. Jemisin’s guest of honour speech and Theodore Beale, the racist, misogynist white guy whose response is a cause for concern for the entire SF and fantasy community.

The title for this one sells itself before you even get to the authors, lol. The publisher says:

“The Nebula Awards Showcase volumes have been published annually since 1966, reprinting the winning and nominated stories in the Nebula Awards, voted on by the members of the Science Fiction & Fantasy Writers of America®. The editor selected by SFWA’s anthology committee (chaired by Mike Resnick) is two-time Nebula winner, Catherine Asaro.

Crown of Midnight is the sequel to Throne of Glass, a Cinderella story with a strong female protagonist. Liz Manthos gave Throne of Glass a rave review and has been waiting with baited breath for the sequel.

“Eighteen-year-old Celaena Sardothien is bold, daring and beautiful – the perfect seductress and the greatest assassin her world has ever known. But though she won the King’s contest and became his champion, Celaena has been granted neither her liberty nor the freedom to follow her heart. The slavery of the suffocating salt mines of Endovier that scarred her past is nothing compared to a life bound to her darkest enemy, a king whose rule is so dark and evil it is near impossible to defy. Celaena faces a choice that is tearing her heart to pieces: kill in cold blood for a man she hates, or risk sentencing those she loves to death. Celaena must decide what she will fight for: survival, love or the future of a kingdom. Because an assassin cannot have it all . . . And trying to may just destroy her.

Love or loathe Celaena, she will slice open your heart with her dagger and leave you bleeding long after the last page of the highly anticipated sequel in what is undeniably THE hottest new fantasy series.”

This teeny weeny  472 page-read keeps cropping up for me.Not only was Trudi Canavan highly recommending this trilogy (of which Black Sun is the second book) to N.K. Jemisin at Continuum, but I’m already reading it.

Somehow I was sent two copies – possibly because I forgot I’d requested it, then a second request passed the novel in the post.

I reviewed Winter Be My Shield, the first in the trilogy.

I interviewed Jo last week. When I wrote my review I was so interested and engaged by Winter that I got stuck right in, critiquing the structure of Jo’s society, never having heard of an egalitarian polygamous society before. I’m really excited by Jo’s claim to researching and discovering societies like her fictional society, although sadly there wasn’t a lot of documentation in English. I want to know more!

It was an excellent interview but due to technical difficulties the interview was corrupted. We’re planning to reschedule using different software.

As soon as I can afford to do so, I’m switching to a Mac. Apparently Macs have better recording software.

PS I will probably offer this second copy as a competition prize.