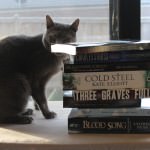 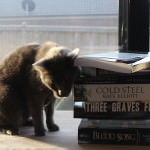 I love the ironing. I adore it SO MUCH that when I last ironed I was interrupted half-way through and still haven’t finished. Today Smokey decided to clean herself while lying on the ironing board because SHE CAN.

[FYI when I have been genuinely trying to iron but walk away to – for example – fetch a water refill for the iron or put clothes away, Smokey has been known to wait until I’m nearly back to the ironing board then leap up, lie down and roll around on the board as if she’s laughing at me.]

Today I put the items received next to her on the ironing board [not a safe proposition at the best of times]. Smokey was distracted from her bath. The books nearly ended up on the floor. After I took these photos I put the camera down very quickly to rescue my books. Because BOOKS.

Doctor Who and the Green Death

There is one disc of story, one of extras. This has already been watched and a draft review written, so stay tuned!

Roadshow says: “UNIT is called in after a miner from the Welsh village of Llanfairfach is found dead, his skin glowing bright green. Jo joins forces with a local environment group, led by Professor Clifford Jones, while the Doctor investigates the nearby plant of a company.”

No mention of Metebelius 3. Roadshow KNOWS NOTHING, JON SNOW.

I’m not a car person but I’ve seen a bit of Top Gear because they’ve featured some of the cast from Doctor Who talking about different stuff. This has demonstrated some lateral thinking and creativity on their part so now I’m curious. Add to that the African twist, and I’m looking forward to giving these discs a spin.

Apparently the Great African Adventure is part of Series 19; I can’t find a separate page for this particular feature, so sorry for the poor link.

I TRIED. I REALLY TRIED.

This non-fiction documentary series explores the complexity of evolution, from how senses evolved to why size matters, and (according to the press release) explores these topics in an easy-to-follow interesting format. I don’t have enough non-fic in my diet so I’m looking forward to this too.

I went on the hunt for a website or webpage dedicated to this TV program but the best I could find was Wikipedia, which is brief to the point of being terse. Along the way I learnt this was a BBC production, featured here in Oz as part of the Catalyst series on Auntie (ABC).

That was all the DVDs I received for review. The DVDs are lonely. And my bluray player petulantly refuses to play DVDs. Just sayin’.

I watch too much TV…

On to the books.

Akshully, before I do the books I should give a shout-out to the Lifted Brow whose managing editor, Sam Cooney, delivered the first lecture of semester to RMIT University’s Copyediting and Proofreading class on Monday. He even bestowed a free copy of the Music Issue upon yours truly.

And the rest of the attending students.

I suspect Sam was on a recruitment drive, for both contributors and readers. As a zine editor I CANNOT RELATE, NO, NOT AT ALL.

Goodluck to Sam. I noticed I did not fall into his target demographic of 18 to 30 year olds [sniff] but he talks a good talk. For a hipster.

I wonder how he fared during hipstergeddon the other night?

This is a collection of short stories about what might happen after death from Dark Moon Books, a publisher with a scary focus.

“Death. Who has not considered their own mortality and wondered at what awaits, once our frail human shell expires? What occurs after the heart stops beating, after the last breath is drawn, after life as we know it terminates?

Does our spirit remain on Earth while the mortal body rots? Do remnants of our soul transcend to a celestial Heaven or sink to Hell’s torment? Are we offered choices in an individualized afterlife? Can we die again in the hereafter? Is life merely a cosmic joke, or is it an experiment for something greater?

Included within this critically acclaimed anthology are answers to these queries alongside tales and suppositions relating from traditional ghosts to the afterlife of e-coli. Explore the afterworld of an Australian cowboy. Discover what the white light really means to the recently departed. Consider the impact of modern, or future, technology on the dead. Follow the karmic path of reincarnation. Travel from the 999th level of Fengdu’s Hell to the gates of Robot Heaven.

Enclosed are thirty-four all-new dark and speculative fiction stories, individually illustrated by Audra Phillips, and exploring the possibilities “after death.””

I accidentally read and reviewed this before putting it up as an item received. What can I say? Serious science fiction, FTW!

Orbit says:
“Krina Alizond-114 is a bookish historian of accountancy practices and a metahuman in a universe where the last natural humans went extinct 5000 years ago. When a letter from her sister goes missing Krina embarks on a dangerous journey across the star systems to find her, along the way getting caught up in an elegant and unprecedented financial scam that involves the mystery of the missing space colony – Atlantis.”

“The first novels based upon the award-winning WARMACHINE® steam-powered fantasy wargame and the world of the Iron Kingdoms™ Role Playing Game! Action-packed steam-tech fantasy novels that combine elements of epic wartime adventure with thrilling cloak-and-dagger espionage

The Iron Kingdoms are at war—a war fought with machine guns and magic, knights of valor, and earth-shaking titans of steam and steel. And now that war may hinge entirely on nothing more than a sheaf of papers.

An alchemical formula, stolen by an ally they thought they could trust, could cost the brave soldiers of Cygnar everything. Their only hope: a cunning spy, a knight out of her element, and a frighteningly small unit of the best that Cygnar has to offer.

Arrayed against them is not only a single, devious enemy, but the combined intelligence apparatus—and possibly the full military might—of the most brutal martial power Cygnar has ever known.”

A steampunk RPG? Shut up and take my money!

The sequel to Cold Magic and Cold Fire (my reviews at the links), I’ve been waiting for Cold Steel for quite some time. It’s not the conclusion to the story though: this is a quartet.

“The third volume in a hugely engaging fantasy set in an ice-bound world with a Victorian feel – features dragons, sorcery and two cousins in great peril.

Trouble, treachery and magic just won’t stop plaguing Cat Barahal. The Master of the Wild Hunt has stolen away her husband. The ruler of the Taino kingdom blames her for his mother’s murder. An enraged fire mage wants to kill her. And Cat, her cousin Bee, and her half-brother Rory, aren’t even back in Europa yet, where revolution is burning up the streets.

Revolutions to plot. Enemies to crush. Cat and Bee have their work cut out for them.”

This debut novel is getting positive attention from a lot of the ‘right’ people.

“There is very little peace for a man with a body buried in his backyard. But it could always be worse …

More than a year ago, mild-mannered Jason Getty killed a man he wished he’d never met. Then he planted the problem a little too close to home. But now, just as he’s learning to live with the undeniable reality of what he’s done, police unearth two bodies on his property — neither of which is the one he buried.

As Jason’s fragile peace begins to unravel, his life is hitched to the fortunes of several strangers: Leah, an abandoned woman looking for answers to her heartbreak; Tim, a small-town detective just doing his job; and Boyd, a fringe-dweller whose past is about to catch up to him — all of them in the shadow of a dead man who had it coming.

With the tense pacing of a thriller and the elegant style of a literary novel, Three Graves Full heralds the arrival of a stunning new voice in fiction.”

Shadows of the Realm

Shadows of the Realm is a self-published novel by an Australian author who is studying writing and editing.

“Bronwyn and Blayke are two strangers being drawn into the same war. Their world is facing invasion from the Third Realm. While they move unknowingly toward each other, they are watched, hunted, and sabotaged. When the Dragon God interferes, it seems their world, Talia, will succumb to the threat. Can they learn enough of the tricks of the Realms before it’s too late, or will everything they love be destroyed?

The young Realmists’ journey pushes them away from all they’ve known, to walk in the shadows toward Vellonia, city of the dragons, where an even darker shadow awaits.”

Shadows of the Realm has 4.5 stars on Amazon after 36 customer reviews; not bad, not bad AT ALL!

The two clever clogs who came up with this title are, perhaps, not quite so enamoured with their cleverness now.

The Canberra Speculative Fiction Guild (the group responsible for Next) says:

“Sequence. Succession. Cause and effect.  Show us what happened.  Next.

Next suggests ‘change’, perhaps, but it doesn’t have to invoke change, it can simply be an account of cause-and-effect.  Soemtimes it’s the absence of change, the sense of inevitability, that gives the story its terrible power and its resonance.  Or it might be a rite-of-passage; of invention and exploration; of the testing and transgression of boundaries; or a story laden with doom or hope or just the inevitability of inescapable repetition.  Yup, this theme is a theme for all seasons; it’s a cut and come again theme that can mean pretty much whatever people want it to mean.

The selected stories range far and wide across all aspects of the speculative genres, from gentle fantasy to full-blooded dystopian SF to hackle-bristling psychological horror, while also canvassing in its sweep whimsy, adventure, romance, parody, and tragedy.

At Supanova I interviewed Nicole Murphy and Ian McEwan from the CSFG. Now that certain stressors in our lives have been resolved, the minion and I will catch up and put these interviews online soon.

One look at the cover and I’m left with a strong impression of ‘epic fantasy in the Medieval European tradition.’ The publisher got the book cover right, because Orbit says:

“From the publishers of David Gemmell, a powerful epic fantasy debut in that same tradition from an exciting new British talent.

‘We have fought battles that left more than a hundred corpses on the ground and not a word of it has ever been set down. The Order fights, but often it fights in shadow, without glory or reward. We have no banners.’

Vaelin Al Sorna’s life changes forever the day his father abandons him at the gates of the Sixth Order, a secretive military arm of the Faith. Together with his fellow initiates, Vaelin undertakes a brutal training regime – where the price of failure is often death. Under the tutelage of the Order’s masters, he learns how to forge a blade, survive the wilds and kill a man quickly and quietly.

Now his new skills will be put to the test. War is coming. Vaelin is the Sixth Order’s deadliest weapon and the Realm’s only hope. He must draw upon the very essence of his strength and cunning if he is to survive the coming conflict. Yet as the world teeters on the edge of chaos, Vaelin will learn that the truth can cut deeper than any sword.”

Who says you can’t judge a book by its cover?

I’m pretty sure I have covered ALL THE THINGS sent to me recently, so I’ll bid you adieu and try to get some actual reviews up soon along with some homework done.