Hi again. Here is a photo of items received from 17 to 23 November 2014. Yes, I actually received a delivery to my door on Sunday. Apparently Bobby Dollar was sleeping late on Sunday as well as Judgement Day. 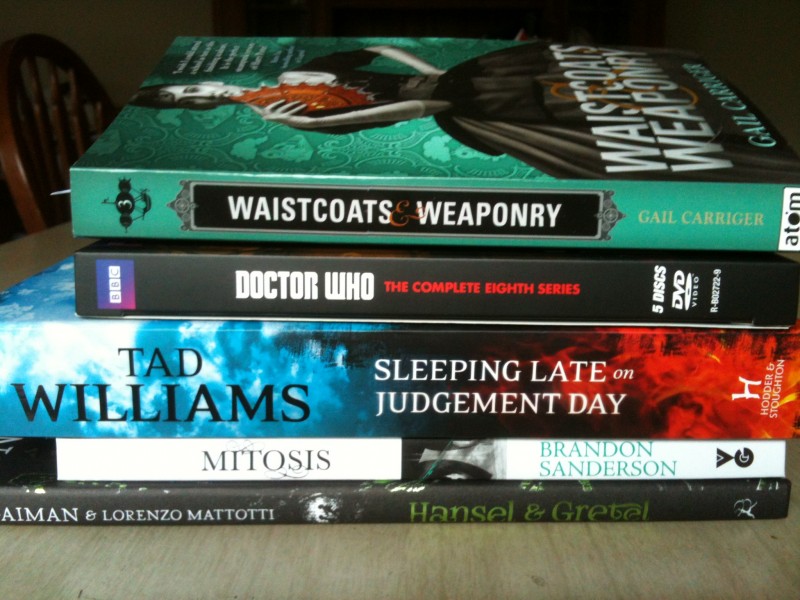 I’ve already reviewed Hansel & Gretel and Mitosis and I’ve started reviewing Doctor Who season 8. I’m half-way through Waistcoats & Weaponry, which just leaves Sleeping Late on Judgment Day for me to nom during the wet weather this week. Summer rain, I just loves it. It’s a great excuse for holing up with a good book. I mean, who wouldn’t want to laze around with a book when it’s raining and thundering outside?

And if you think it’s still spring, just remember, I’m sitting around in light-weight trousers and a tee shirt (featuring Racoon Galaxy no less), bare feet and no jacket. This is the part of summer I love, before we need the air conditioner on.

Speaking of cats, I still need to read Tad Williams’s Tailchaser’s Song. Last time I tried to give them money for a book, they wouldn’t take my money. Go figure. It may have been re-released though.

I’ve previously reviewed Dirty Streets of Heaven, book 1, and Happy Hour in Hell, book 2 of the Bobby Dollar trilogy by Tad Williams. Oh, yeah, and I interviewed Tad a while ago; it’s my longest interview ever but Tad was fascinating, talking about everything from Literature to Tolkien.