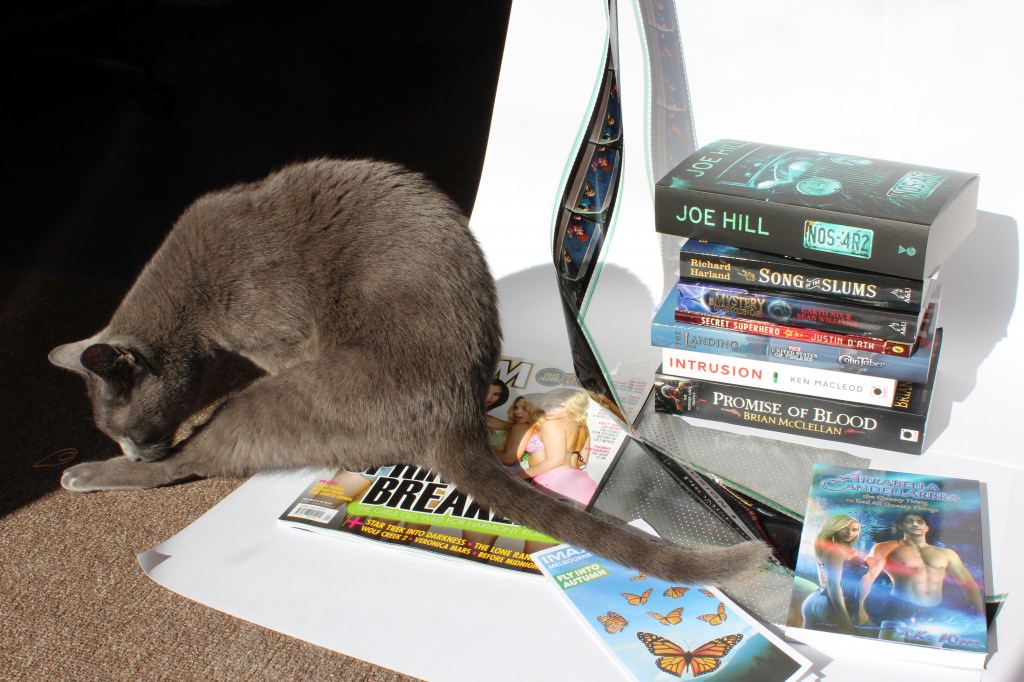 This is Smokey being HELPFUL this morning, while I was trying to photograph the items received. Methinks she wants to be the centre of attention.

This has got to be short & sweet, so here goes nothin’:

From the publisher: “A terrifying new novel from the NEW YORK TIMES bestselling horror writer.

Summer. Massachusetts. An old Silver Wraith with a frightening history. A story about one serial killer and his lingering, unfinished business.Anyone could be next. We’re going to Christmasland…NOS4R2 is an old-fashioned horror novel in the best sense. Claustrophobic, gripping and terrifying, this is a story that will have you on the edge of the seat while you read, and leaving the lights on while you sleep. With the horrific tale of Charles Manx and his Silver Wraith, Joe Hill has established himself as the premiere horror and supernatural thriller writer of his generation.”

Song of the Slums by Richard Harland

“What if they’d invented rock ‘n roll way back in the 19th century? What if it could take over the world and change the course of history? In the slums of Brummingham, the outcast gangs are making a new kind of music, with pounding rhythms and wild guitars. Astor Vance has been trained in refined classical music. But when her life plummets from riches to rags, the only way she can survive is to play the music the slum gangs want. Charismatic Verrol, once her servant, is now her partner in crime…and he could be so much more if only he’d come clean about his mysterious past…
‘I loved the music, the syncopated rhythm, the dark, smoky atmosphere, the call to arms, the love story…this is gaslight fantasy at its best.’ Kate Forsyth”

Mystery of the Golden Card by Garth Nix & Sean Williams

Publisher says: “Magical twins, mystery and danger, unexplained events, and an Evil that refuses to be contained … Twins Jack and Jaide are troubletwisters and in this book they must use their elusive Gifts to search Rourke Castle for the mysterious Golden Card of Translocation.

Can twins Jack and Jaide find the mysterious Golden Card of Translocation and make it out of Rourke Castle alive? When eccentric Young Master Rourke dies in suspicious circumstances, troubletwisters Jack and Jaide are sent on a mission by their father to retrieve a lost Golden Card from somewhere within the vast Rourke estate. But secret agents for The Evil are also in pursuit of the card, and the troubletwister twins know that whoever finds it first will gain access to a Gift more powerful or terrible than any other. Together they negotiate secret passages, talking parrots and animated suits of armour, while trying to control their own fledgling Gifts. It rapidly becomes impossible to know who to trust and who might be an agent – even among those closest to them.”

Been and read this already too: review coming soon. Publisher says “An electrifying new series from Justin D’ath, author of the bestselling Extreme Adventures. Colt Lawless is on the run, suddenly famous, and more than a little superhuman.  But can he save the last animals on earth? Colt Lawless has been performing superhuman acts all over town. To protect his secret identity, he and Birdy have come up with the ultimate disguise. Superclown – completely fearless and impossibly strong. But when he wrestles with an angry panther at a crowded school disco, it looks like Superclown’s cover is blown already. How will he save the world’s animals now?”

I’ve read and reviewed the first two in this series already: The Last Elephant (number one) and The Singing Ape (number two).

The Landing by Colin Taber

The Landing is an alternate history: what if the Vikings settled America when they first went over there? I’ve started reading this: it’s an interesting twist for history.

Author’s website says, “Following the turn of the first millennium the Vikings are expanding beyond northern Europe by way of axe and trade. Their spreading influence and settlements, founded by warriors, farmers and merchants, can not only be found in the far flung corners of the continent, but also across the Atlantic, beyond the stepping stones of the Faroe Islands and Iceland, as they establish themselves in the newly discovered lands in the west.

Eskil, orphaned in war, but now a man, is leading his followers to found a settlement in the west dedicated to Odin and Asgard’s gods. There he will build a new realm, and after tests, adventures and trials, he will leave a legacy that will grow to be the strongest nation the world has ever seen.”

The publisher says, “The compelling new novel from the award-winning author of THE EXECUTION CHANNEL and THE NIGHT SESSIONS. Imagine a near-future city, say London, where medical science has advanced beyond our own and a single-dose pill has been developed that, taken when pregnant, eradicates many common genetic defects from an unborn child. Hope Morrison, mother of a hyperactive four-year-old, is expecting her second child. She refuses to take The Fix, as the pill is known. This divides her family and friends and puts her and her husband in danger of imprisonment or worse. Is her decision a private matter of individual choice, or is it tantamount to willful neglect of her unborn child? A plausible and original novel with sinister echoes of 1984 and Brave New World.”

I’m looking forward to reading this: I don’t have enough SF in my diet.

Promise of Blood by Brian McClellan

Promise of Blood is from a protege of Brandon Sanderson and the guest blogger who wrote ‘Researching Reality for a Fantasy World.’ The publisher says, “An explosive epic fantasy debut, which reads like Bernard Cornwell crossed with Conn Iggulden writing about the French Revolution – with mages!

‘The Age of Kings is dead. And I have killed it.’

Field Marshal Tamas’s coup against his king sends corrupt aristocrats to the guillotine and brings bread to the starving. But it also provokes war in the Nine Nations, internal attacks by royalist fanatics and greedy scrambling for money and power by Tamas’s supposed allies: the Church, workers’ unions and mercenary forces.

Stretched to his limit, Tamas relies heavily on his few remaining powder mages, including the embittered Taniel, a brilliant marksman who also happens to be Tamas’s estranged son, and Adamat, a retired police inspector whose loyalty will be tested to its limit.

Now, amid the chaos, a whispered rumour is spreading. A rumour about omens of death and destruction. Just old peasant legends about the gods returning to walk the earth. No modern educated man believes that sort of thing. . .

But perhaps they should.”

A spoof of fantasy & romance genres, the covers and internal art alone are worth the purchase price of Arrabella and Candellarbra. I have yet to read it, but I’m looking forward to a couple of glasses of wine one evening curled up with this book, chortling away to myself.

The Publisher says “Arrabella Candellarbra is like no one you’ve ever met before; even though her questy thing is the stuff of legend.

Arrabella, a beautiful, flaxen-haired maiden trained in all things warrior-like by the most famous warriors of all – The Reginas – embarks on a quest to claim her birthright and to wield the power of all the lands.

Nothing could possibly go wrong on a quest like this, could it?

Well just you wait until Arrabella joins forces with Lord Langly Kilkenny – the perfect specimen of manliness; icicle-bearded Gary – the wisest of all Wizards; and Prince Jim – the very-fey fairy Regent.

Because the Four Adventurers soon find themselves pitted against the Evil Betty-Sue – the meanest of evil beings in all of the lands.

Because they must battle Betty-Sue and her scary minions – the Saw-Toothed Bunnies, the Viscous Tongued Frogs and the Barella Monkeys – to rescue The Reginas from…something!

Arrabella Candellarbra and the Questy Thing to End All Questy Things featuresheroic heroes and a host of characters and creatures never before assembled in one story.

And it promises that all those epic questy things will never be the same again.

A. K. Wrox is the secret password to a world of wonder, exhilarating adventure and very strange flowers. It’s also the pen name for writing duo Kylie Fox and Amanda Wrangles.

The Film Ink magazine, piece of the IMAX screen, section of IMAX film and free ticket to see a movie at IMAX are all courtesy of IMAX, strangely enough. Dark Matter’s evening at IMAX is recounted here.