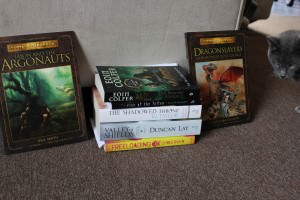 I am NOT. Amused.  I am the most dangerous creature in ANY room.  Not some DRAGON.

Ah well, begin at the beginning I suppose.  For the past couple of weeks my servant has NEGLECTED me while she’s been off at university, attending classes and meetings trying to get disability access organised.  Even though she’s dropped classes due to falling behind while this has been going on, it seems like she’s wasting as much time as ever. She’s even been disciplined by the university for asking for access and complaining when they have refused!  She should take as much notice of my disciplining her as she does of the university – I ignore her, she ignores back.  I claw her and she yells in pain and puts me down, then moans for the next week or two while it heals.

And this column has been delayed.  Once she actually put the books on the floor, I was extremely obliging, posing for several photos without complaint.

So it’s ALL HER FAULT THIS COLUMN HAS BEEN NEGLECTED FOR A COUPLE OF WEEKS.  Now I’m back in my rightful place as the centre of attention, I’ll tell you all about the items we’ve received recently.

The first item received was Freeloading by Chris Ruen.  In her recent interview, Sarah Braybrooke specifically discussed the publicity process leading up to the launch.  Sarah’s description of Freeloading inspired the servant’s interest, especially as it relates to the current debate concerning pirating and fans as patrons.  This is definitely non-fiction, but it’s so relevant to SFF culture – and to the core subject ‘Writing non-fiction’ where the servant has to read LOTS of non-fiction – that I thought I’d allow her to peruse this while providing a warm, comfortable lap.

Valley of shields by Duncan Lay was one of the next two books to arrive.  This is part two of an epic fantasy series that started with Bridge of Swords. When it arrived, I leapt up onto the desk to inspect this acquisition closely but I couldn’t smell any cats or even creatures with feline aspirations. There don’t appear to be ANY.  [sniff]

The Shadowed Throne by KJ Taylor is another part two, preceded by The Shadow’s Heir.  There don’t seem to be any cats on this cover either, and what’s worse is there is GREAT BIG THREATENING WATER with only a flimsy bridge. [licks self] I think I’ll stay right here in my warm, dry living room/hallway/bedroom/living room/hallway –

[Stop charging around like a herd of baby elephants, Smokey! You’re distracting me from writing up YOUR COLUMN – editor] [gallops past again] I’m working up an appetite for the turkey in the oven.

Dragonslayers and Jason and the Argonauts may have almost brought a tear to the servant’s eye with nostalgic remembrance of beautiful illustrated children’s books she owned before the terrible twins got hold of them.  These are not children’s books but they are beautifully illustrated.

The arrival of Warp: the Reluctant Assassin by Eoin Colfer annoyed me greatly: the servant let out an annoying squeal. For some strange reason she’s really enjoyed the Artemis Fowl series and even Colfer’s adult book Plugged.  Although she’s SUPPOSED to be an adult, the servant really enjoys a well-written children’s book. I’m not impressed – instead of reading children’s books she should be grooming me. In fact she should be grooming me and catering to my every whim instead of a lot of the other extraneous tasks she performs.

[sniff] By the way – on another day when the servant NEGLECTED me, she went into Melbourne’s CBD to interview Eoin Colfer.
Rise of the Fallen is by Teagan Chilcott, an Indigenous Australian author – [a first for Dark Matter reviews! – editor]