Fans Get a Sneak Peek at the Storyboards

13-JAN-2011 – Gold Coast — Iron Sky, the Finnish-Australian-German sci-fi movie about Nazis from the Dark Side of the Moon, has begun the Australian part of their shoot at Village Roadshow Studios in Queensland.

Iron Sky is breaking new ground with its wide ranging collaboration with the fans and the Internet community. This community has contributed ideas and creative talent for the film, as well as funds via purchasing merchandise and support kits, and by actually investing in the film. Iron Sky is aiming to gather one million euros from its fan community as contributions and investments. 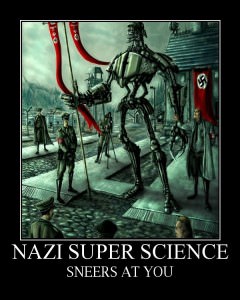 Iron Sky is a dark science fiction comedy where the Nazis, who fled to the Moon in 1945, return to claim the Earth in 2018. The screenplay is written by the acclaimed sci-fi writer Johanna Sinisalo (Nebula Award nominee 2009, Finlandia 2000) and Michael Kalesniko (Private Parts).
“Working with the audience, both with creative content and funding, is the future of genre film”, said the Finnish producer of Iron Sky Tero Kaukomaa (Blind Spot Pictures). “We are very happy with how both of our crowd-sourcing and crowd-funding ventures have progressed. We have a sizeable number of fan investors, and we have already collected over a third of our goal of one million euros.”

Iron Sky is a first for Australia, with regards to its international co-production partners… and its revolutionary financing structure.

”This has been and continues to be a great journey for us. It’s a film that we feel will punch well above its weight. The international creative team is a pleasure to work with. And we have been privileged to be absorbed into the crowd culture that is so integral to the project,” said Australian producer Cathy Overett of New Holland Pictures.

Iron Sky gives its fans an unprecedented view of the film via the Iron Sky Sneak Peek web service. The followers of the film can see how the first five minutes of the film are made, starting from the idea and progressing through the script, storyboards, animatics etc. to the actual finished scene, months before the film is actually published. The price of subscribing to Iron Sky Sneak Peek is just one euro, but those who want to support the film can pay more. All the proceeds of Iron Sky Sneak Peek go directly to making the film. New content is published every month: to celebrate the start of principal photography in Germany in November, the Iron Sky team published the idea and the script of the first scene. In January the fans can get a sneak peek at the storyboards.

Vuorensola and Torssonen’s first film was Star Wreck: In the Pirkinning – a fan-made sci-fi parody, which was published both as a free download and a commercial DVD. The film has reached over eight million viewers all around the world and gathered a strong international fan base.

The Star Wreck project gave birth to a collaborative filmmaking platform called Wreckamovie, which offers film creators a direct connection with their audience, and offers the fans a never-before-seen chance to interact with movie projects.

All photos courtesy of Iron Sky; some photos by Tarja Jakunaho. 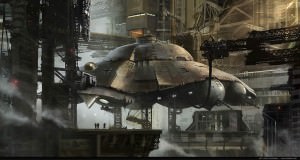 Gold Coast/Australia – 04-Feb-2011 — Iron Sky, the Finnish-German-Australian co-production, has finished principal photography in Queensland Australia. Iron Sky is a dark science fiction comedy where Nazis fled to the Moon in 1945 – and in 2018 they are coming back. Iron Sky took about nine weeks to shoot, half of which took place in Frankfurt Germany, and the second half at the Village Roadshow Studios in Queensland, Australia.

“We have been working on Iron Sky 24/7 for years, and it’s amazing to think that the main part of my work in it is finally done”, said the director of the film Timo Vuorensola. “Of course I’ll be involved in the post production and editing too, but I can’t help but feel a bit dazed. During these years we’ve met such a big bunch of great, talented people, and it makes me a bit melancholy to think that we won’t be seeing them in quite a while – not before the premiere of Iron Sky in about one year’s time.”

“Plans for the future? In the short term, they include sleeping for 48 hours straight”, added Vuorensola.

“Wow, I feel like I had stepped out of a time machine”, said the producer of Iron Sky Tero Kaukomaa. “It feels like there’s been just a nanosecond between the start of the principal photography in Germany three months ago, and today’s wrap here in Australia. Next week we are already presenting the first promo in Berlin’s EFM.”

The Iron Sky shoot was surrounded by natural catastrophes both in Germany and especially in Australia. In Germany the last shooting day had to be transferred to Australia because of a sudden massive snow storm. In Australia some of the outdoor location shoots had to be moved into studio because of the flooding. A day and a half after the first location was shot in downtown Brisbane, the whole area was under water. In the last week of the shoot cyclone Yasi hit the northern part of the state, but didn’t cause disruptions to filming.

“It was great to know that we were snug and dry in studio with all this happening around us,” said the Australian producer Cathy Overett. “And we are delighted with the end result. We’ve had a great team on the shoot here and it shows in the production values. The performances from our cast and the footage we’ve assembled so far promise a film that will punch well above its modest budget.”

“The shoot itself was a child’s play for the visual effects team,” said the visual effects producer Samuli Torssonen. In fact, Samuli and his assistant Juuso Kaari were instrumental on set in ensuring the lighting, image capture and management of the vast green screens were spot on in capturing the key footage needed to build on with CGI. This included directing a number of plate shots himself, both in studio and on location. “But now the real work is about to begin for me and my crew. After the shoot we will take the project to Tampere, Finland, where our 15 person team is eagerly waiting for the final cut, so we can start crunching the frames on the 500 very ambitious special effects shots of Iron Sky.”

“We are still looking for talented visual effects professionals who know they way around Maya, Lightwave, Nuke etc – if you are looking for a job and don’t mind moving to cold, dark Finland, send us your showreel: jobs@ironsky.net” 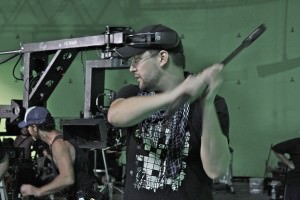 Intense collaboration continues with the Finnish filmmakers
HELSINKI, 10-FEB-2011 — Adobe has once again teamed up with the creators of the Finnish Star Trek parody “Star Wreck” to support their enthusiastic and creative working methods with upcoming sci-fi comedy “Iron Sky”.

The Iron Sky CGI-department led by VFX -producer Samuli Torssonen has been using Adobe products for a long time: “One day, when we were working on Star Wreck, a shipment of Creative Suite 2 boxes arrived. Without those tools it would’ve probably been impossible to finish the film on schedule.”

Many years have passed after that and the CGI-team has been growing all the time. Now the team is filming their next movie about space Nazis with the production company Blind Spot Pictures and a budget of about 7M €. Adobe was selected to be the provider of the software because of the company’s great products, commitment to innovation and its broad technical expertise that all exceed the high standards of the Iron Sky movie production. Iron Sky uses Adobe Creative Suite 5 Master Collection to create the unique look of Iron Sky.

“It’s great that Adobe has been following us and supporting us from the very beginning. Personally I think that this kind of a long-term collaboration is something that companies should aim for. Now we are going to work with the Iron Sky visual effects for one year and during that time we are developing our collaboration even further, so this is only a start”, Torssonen comments the collaboration. 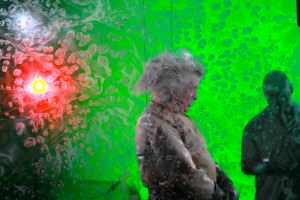 “Our previous movie, Star Wreck, was seen by over eight million people all over the world. This has built Iron Sky a large and a very active fan base, who can’t wait to hear more about our upcoming movie,” comments the director of Iron Sky Timo Vuorensola. “One of the driving forces of our production is keeping in direct contact with our fans, both in social media and in our collaborative movie creation platform Wreckamovie.com. Our collaboration with Adobe doesn’t stop after we have installed the software. Actually we are going to open the doors to our CGI-department and offer some tutorials how you are able to create images similar to Iron Sky.”
“Adobe had a chance to work and cooperate with the Iron Sky team in their previous movie project, Star Wreck back in 2005. Adobe’s solutions enabled and played a decisive role in the overall creation of Star Wreck”, states Business Development Manager Max Hagelstam from Adobe. “We are thrilled about their upcoming movie Iron Sky, which is to be released in the beginning of 2012. Adobe is absolutely stoked about having a chance to be involved in the creation of Iron Sky, and is cooperating with the Iron Sky team to ensure the creation of the best possible visual experience for the movie audience.”

28-March-2011 Helsinki — Iron Sky, the Finnish-German-Australian sci-fi black comedy about Nazis from the Dark Side of the Moon, has released its promo trailer online. The trailer is still work-in-progress and it was released on the film project’s Iron Sky Sneak Peek web service to give the fans a glimpse of what the live action in the film will look like, and to get comments and suggestions for finishing up the promo trailer.

“We opened Iron Sky Sneak Peek when we started shooting Iron Sky last November as both a service for fans and a crowd funding channel. A subscription costs a minimum of one euro, but those who want to support us can pay more”, says Timo Vuorensola, the director of Iron Sky. “The basic idea of the service is to give the internet audience a chance to see how the first five minutes of Iron Sky are made, starting from the idea and going through script, animatics and so on. Eventually, the subscribers of Iron Sky Sneak Peek will get to see the first five minutes of the film before anybody else.”

“So far we have been very reserved about showing something that’s unfinished, but now we are expanding the service into an experimentation laboratory, where we will release other pieces of ‘work in progress’ material in addition to the trailer, and ask the audience for feedback”, says the producer of Iron Sky, Tero Kaukomaa. “Iron Sky Sneak Peek has been a great way for us to get support from our fans and to give them a chance to influence how the movie will turn out.”
The finished version of the promo trailer will be released at this year’s Cannes International Film Festival.