Invincible is a comic book focusing on Mark Grayson, a teenager whose father is a superhero. In this volume, Family Matters, Mark grows into his own superpowers while juggling school and watching his mom cope with the superhero lifestyle. She soldiers on but suffers when her husband disappears for an extended period of time.

Mark meets other teenage superheroes and starts to team up with them. He has a crush on Atom Eve who happens to be in some of his classes at high school.

This is a nice story that was iconic in its time — it was originally published in November 2002 — and it will still appeal to teenagers and those interested in the domestic side of superhero life. However, these days — post-Incredibles — Invincible falls a bit flat. There’s just not enough substance in this volume to engage adults. I’m not alone: most of the Impact Comics Book Club seemed to be of a similar opinion.

Helen’s information dump at the comic book club, giving Invincible context, was more interesting than the actual comic book itself. But then, her spiels usually are.

This first volume is, in my opinion, PG-rated although Atom Eve is objectified with ass shots and an overly sexualized costume in contrast to the menz. However, according to Helen, Invincible‘s later installments develop in a much more adult direction. I’m not sure if the comic book characters ‘grow up’ alongside readers or if the writer decided to spice things up Game of Thrones style in later volumes; for example, in issue 110, Mark Grayson is raped.

As a pre-Incredible comic book, Invincible was groundbreaking. Not so much now but this first volume, Family Matters, remains a recommended read for a YA audience, with a warning that later volumes are intended for a more mature audience. 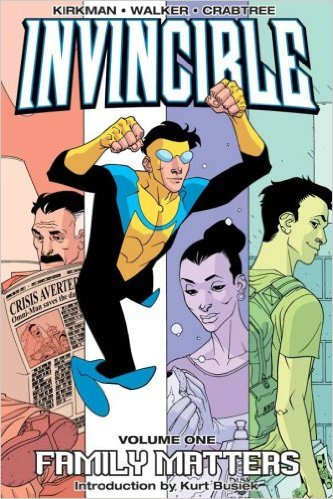