Into the Woods was previously reviewed by CJ Dee, however, I totally disagree with her verdict so I wrote another review.

It’s a Hollywood mashup of a number of different classical fairytales: Red Riding Hood, Jack and the Beanstalk, Cinderella… you name it. Take perfectly good chip-potatoes, boil them into a pulp, bash and mash together until they’re a soggy, tasteless pile of bland. This is Into the Woods.

Most of the cast are recognisable science fiction and fantasy icons or actors beloved of the SFF crowd at the very least.

The costumes are fabulous and the visuals stunning; not as stunning as Jupiter Ascending but, still, really well done.

The music was boring and repetitive. So much so that the minion, sitting on the couch watching the movie, burst into song, singing along with words like these:

Now we sing some more,
because we’re a crashing bore,
maybe the audience will sing along,
not noticing we’re singing the same old song.

Into the Woods gave me new appreciation for musicals I love, anything from The Mikado to The Lion King to Keating the Musical to Doctor Horrible’s Singalong Blog and Musical the Commentary. Into the Woods is that musical that bores both children and some but apparently not all adults — CJ gave it 5 stars!

I’m giving Into the Woods 2 stars. Sadly, the minion purchased a bluray version. While I pack my house to move, I’ll try to lose it. 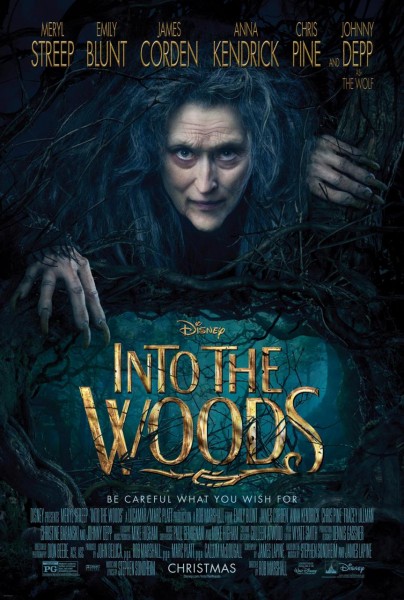