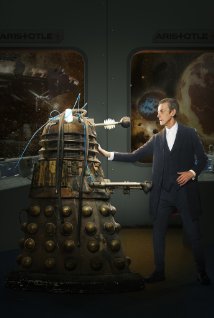 ‘Into the Dalek’ begins with a space battle, a lone X-wing — oops, human fighter — fleeing a massive dalek mother ship with one dead pilot and one living pilot, Journey Blue, apologising to the dead pilot.

Journey Blue awakens on the floor of the TARDIS after her fighter explodes.

The Doctor offers Journey coffee in a takeaway cup; this Doctor isn’t very ecologically friendly. Is that a brand-name I keep seeing on the coffee cups? How much for product placement? Am I wrong? Is the logo some awesome SFF or pop culture reference? I just could not see.

When they arrive on the human ship, the humans thank the Doctor for saving Journey before informing him they plan to execute him. The human ship is a hospital ship but they don’t have any doctors because the daleks don’t leave wounded and the humans don’t take prisoners. Except they do. So they need the Doctor to perform a miracle: use a shrink ray to go inside a dalek and fix it because it wants to destroy all daleks.

Queue Fantastic Voyage and Innerspace-type story after the Doctor fetches Clara. Add some redshirts. Except their shirts aren’t red.

Clara’s cute-meet with Danny Pink (Samuel Anderson) was sweet. I’m not sure how I feel about focusing on Clara’s relationships outside of her adventures with the Doctor: is Doctor Who a science fiction show about the Doctor’s adventures through the companions’ eyes or is it a soapie about the companions’ lives? I suspect your answer to that question will influence your enjoyment of this season.

Missy’s (Michelle Gomez) cameo was gratuitous and a bit silly in my opinion. Its sole purpose was to remind the audience — with a baseball bat — that there’s a story arc.

This is definitely one of the better zodes with Moffat’s fingerprints. The biggest problem with the plot was “If doing X gives Y outcome and Y outcome is not desirable, then UNDO X“. Which, of course, they didn’t; instead they did some shenanigans that involved talking and posturing. The outcome — increased moral ambiguity around the Doctor — was quite nice. I like the Doctor being a ‘shades of grey’ character whose power and hatred may have corrupted him.

Under Moffat, Doctor Who leans towards pantomime for family audiences while leaning away from science fiction and historical-fiction-with-time-traveller stories. I think ‘Into the Dalek’ would have more broad appeal than the panto stories and the stories aimed more exclusively at younger audiences.