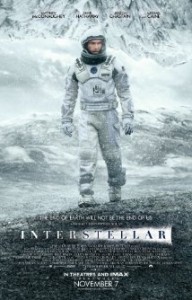 Interstellar is a serious science fiction movie in a similar sub-genre to Contact (1997), also starring Matthew McConaughey. It is based on prominent 20th century science fiction works like C S Lewis’s Space Trilogy novels, Robert Heinlein’s Time for the Stars, Arthur C Clarke’s 2001: A Space Odyssey, Isaac Asimov’s short stories and so on. Thus science fiction buffs will both enjoy Interstellar and enjoy dissecting it, with its strengths and flaws. However, I am going to tap dance around the plot and issues I’d like to discuss in order to avoid end-of-movie spoilers.

Cooper (Matthew McConaughey) is an engineer stuck farming corn because the world didn’t run out of fuel and machines, it ran out of food. Although Interstellar almost glosses over the back story, it appears a cataclysm occurred where millions died, leaving a remnant of humanity carrying our torch into the night. There are fears the human race may become extinct.

Cooper has two kids: Murphy (Mackenzie Foy), a smart young girl getting into trouble at school because she challenges revisionist history; and Tom (Casey Affleck), a teenager with intelligence who loves farming in spite of his father’s distaste for Tom’s choices.

Machinery starts going haywire, returning to the house because gravitational anomalies (???) screw up their computers.

Murphy says there’s a ghost in her room: this is the onset of a meta-physical paradox.

Cooper and Murphy decipher the ghost’s barcode made from sand on the floor. Cooper realises the barcode is a set of coordinates; they find secret headquarters on Earth. NASA official Professor Brand (Michael Caine) knows Cooper. Brand seconds Cooper to NASA’s super-secret mission after Cooper finds the headquarters because NASA needs him. Cooper is their only pilot who has flown outside a simulator — but Brand didn’t set out to track Cooper down.

Cooper heads off to space. If you’ve seen the trailer, you’ve seen dramatic family tension with Murphy in hysterics. It’s all very noble and moving.

Then the rocket takes off. In IMAX the bass speakers set my chair to vibrating almost as if I was in the rocket. Certain scenes, including the rocket taking off, take up the full 7 stories of the IMAX screen. I’m not sure what the format is but it’s not your usual 16:9 landscape, it’s closer to square.

After setting autopilot, everyone goes into hibernation, emerging for the transition through a wormhole near Saturn. Once in the galaxy on the other side, the crew investigates planets with a view to human settlement. The strong references to 2oth century science fiction result in predictable plot developments but they’re mostly carried off well.

Petty flaws in the movie included things like guys drinking from shiny new stubbies with labels and an older Murphy drinking from a fast-food-outlet disposable drinking container in spite of massive shortages on Earth threatening the human race.

I wish the Nolans left ‘They’ as mysterious entities open to interpretation. The revelation of who ‘They’ are created a double meta-physical paradox that could, at least in part, have been avoided. A paradox in a plot needs to be a feature, not a deus ex machina (god in the machine) plot-fix.

Sometimes the music and soundtrack overpower the dialogue, making it difficult to follow. Mostly the deep bass rumbling the seat enhanced the immersive feel.

Imagery was excellent, easy to see and immersive, especially when the larger screen was used to highlight rocket launches, scenery and space scenes. Interstellar‘s black hole was gorgeous and, surprisingly, a serious scientific development. Dazed said:

As reported in WIRED, Nolan enlisted astrophysicist Kip Thorne to work with his special effects team in order to create the most realistic looking black hole on cinema.

Interstellar‘s computers rendered 800 terabytes of data about black holes to come up with the below image of a black hole, which they used in the movie.

“We found that warping space around the black hole also warps the accretion disk,” special effects head Paul Franklin said. “So rather than looking like Saturn’s rings around a black sphere, the light creates this extraordinary halo.”

Thorne quickly realised that the model generated by Nolan’s team is as scientifically accurate as it gets. Forget artistic licence; this is what black holes actually look like. “This is our observational data,” Thorne explained. “That’s the way nature behaves. Period.”

So Interstellar is not only a serious science fiction movie, it’s helped develop science.

The minion and I have debated Interstellar‘s plot and representation of its backstory. The minion thinks that Interstellar‘s focus on a small community may have detracted from viewers’ perceptions of the global situation because we don’t see people suffering and dying on a global scale although it’s discussed on screen. I think the takeaway from Interstellar is that it’s ok to treat the Earth as disposable because we’ll move to the stars. In an era where governments and individuals could still redeem the Earth as we teeter on the brink of self-destruction, focusing on moving on supports current destructive behaviours.

Either way, Interstellar has stayed with both the minion and I for the past several days in spite of PAX Australia being a distraction. This being the case, I rate Interstellar highly for its intelligence and promoting discussion. You can watch Interstellar for a space story, for serious science fiction or for a surface story with ‘splodey bits and an element of romance. Highly recommended.