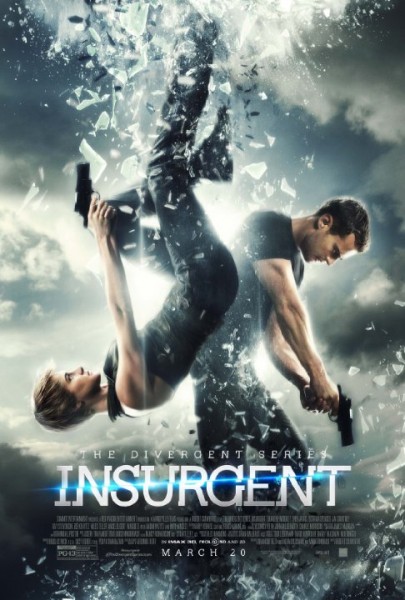 Divergent, the first movie in this story, is reviewed here. That review explains some of the background to both movies, like the factions.

The second in the Divergent series, Insurgent opens with Eric, Janine’s pet Dauntless sociopath, searching the ruins of Tris’s parents’ home and finds a pretty box in the steampunk style with all the factions’ symbols, one on each side.

Tris, Four and friends are hiding with the somewhat passive-aggressive Amity faction. They’re recovering from Janine’s attack on the Abnegation faction in the first movie, where Janine drugged the Dauntless faction and used them to kill off an entire faction so she could retain control.

A pleasant scene turns into a nightmare. We’re inside Tris’s head, seeing her guilt over shooting Will and her parents’ sacrifices to keep her alive.

Back in the real world, refugees try to stay free and alive while Janine’s minions search for Divergent candidates to open the box. Caleb, Tris’s brother, and Peter, Tris’s nemesis, put themselves first instead of staying with the Dauntless refugee pack.

Right from the opening logo, with hints of the Matrix, through to Tris’s dreams, which begin as if they’re real scenes then warp into nightmares, Insurgent plays with our perceptions of reality. Later Tris returns to the virtual world simulations that test her Divergent abilities; where these tests begin and end is confusing. Insurgent intentionally references the Matrix and Inception while aiming at a Young Adult audience. Although the dreams and simulations are intended to reflect Tris’s inner journey, they interrupt the flow of the story a little. I expect some fans will have post-Inception arguments about when the simulations begin and end, too.

Insurgent the movie by necessity abbreviates the book. For example, it seems the Tris/Christina conflict over Will’s death is a mere hiccup, however, to delve into this more would have slowed the movie down. Purists may re-read the novels.

I have So. Much. Love. for Tris’s new haircut and her practical approach to clothing. Long hair seemed ridiculous for Dauntless, the fighting faction. Tris’s pixie-cut not only suits her, accentuating her athleticism and elven looks, it’s practical as are her boots and the pants she usually wears. I’m so over loose long hair and spiky-heeled shoes for kick-ass heroines. I hope Insurgent inspires a new wave in hair fashion.

Kate Winslet makes a fantastic stone-faced ruthless leader. I won’t comment on the hunky male eye-candy. Nope. Not going there.

Insurgent‘s plot is compelling for the YA audience and the visuals are stunning while supporting the themes of betrayal and loyalty, guilt and forgiveness. I suspect there will be a director’s cut because it felt the climax stuck to the bare essentials to keep within a specific time limit. Dark Matter‘s (male) minion also really enjoyed Insurgent so it’s for the menz too.

THE DIVERGENT SERIES: INSURGENT, the next gripping action-adventure in the blockbuster DIVERGENT franchise, raises the stakes for Tris as she searches for allies and answers in the ruins of a futuristic Chicago. Tris (Shailene Woodley) and Four (Theo James) are now fugitives on the run, hunted by Jeanine (Kate Winslet), the leader of the power-hungry Erudite elite. Racing against time, they must find out what Tris’s family sacrificed their lives to protect, and why the Erudite leaders will do anything to stop them. Haunted by her past choices but desperate to protect the ones she loves, Tris, with Four at her side, faces one impossible challenge after another as they unlock the truth about the past and ultimately the future of their world.