Delilah, Scarlet, Fiona and Jasmine are four famous influencers in Hollywood. They’re all around the same age – 16 to 18 I think – but are at different places in their careers. Some parents are protective in a “no way in hell are you making yourself vulnerable for your career” to the opposite “you’re making me money, YOU WILL CONTINUE TO MAKE ME AS MUCH MONEY AS POSSIBLE OR ELSE”.

During the course of the story, they meet, they form friendships, rivalries and enmities, then one ends up dead. Was it suicide? Was it murder? Whodunnit?

In the Influencer world, foul is fair. Performance is everything. Secrets abound. Teen drama and angst runs riot.

I couldn’t help but compare Influence to Hannah Capin’s Foul is Fair. Capin’s book is far darker, more of a horror/thriller, while Influence has a sweet ending that did not quite reconcile characters’ early responses to the preceding murder. However, those who found Foul is Fair too dark will love Influence. I’d prefer a story in the middle ground although I found Foul is Fair utterly compelling.

Murder, grief and loss were vehicles in this story to inspire others to greater … heights? The characters’ responses in the conclusion felt more like a response to a stranger dying than an event that deeply affected them personally.

Influence includes people of color. At least one of the central characters is probably Latino or Hispanic based on the names. But there’s nothing that stands out as cultural, the characters all seem very “white” and homogenous apart from their “influencing” personas.

And there’s a maid. Enough said?

Influence reveals a bit about the lives and careers of real-life influencers, especially as one of the co-authors is an “influencer” herself. As such, it reveals how shallow, controlled, artificial and financially-driven that world is, and how influencers are not to be trusted. And yet I doubt most readers will hear that message. Instead we see a glamorous celebrity quartet performing for the masses. Possibly with sequels planned, although there’s no obvious hook at the end.

At certain points, Influence totally had me hooked. At others, I compared with Foul is Fair: I’m not a huge fan of horror, but Influence‘s ending is too saccharine sweet for me.

I’m giving Influence 3.5 stars with the expectation that a lot of teen girls and influencer fans will rave about this story. That’s ok: I’m used to standing in the shadows on the periphery, not part of the masses. Which possibly explains my reaction to this story. 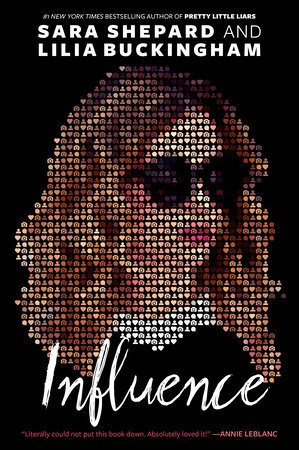