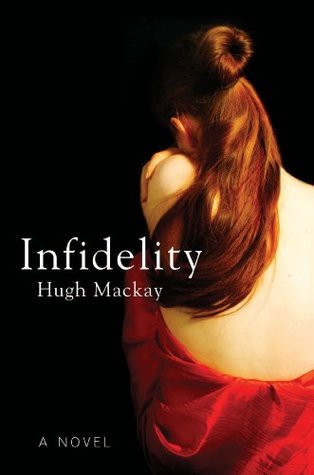 I declare up front that I’ve been a fan of Hugh Mackay’s work long before I read any of his fiction. Hugh Mackay’s non-fiction books were my most oft-quoted resources for my social science degrees. I’ve read most of his published non-fiction and made my kids read some for high school assignments. I’ve influenced my son so successfully that when I tried to recommend Infidelity to him, he told me HE’D ALREADY READ IT and told me about Hugh Mackay appearing on Spoonman’s podcast.

Infidelity is Tom Harper’s story; he’s violated professional practice standards so he’s fled his home country – Australia – to spend some time abroad while the dust settles. At a loose end both in the immediate and longer term, Tom is searching for something.

Tom meets Sarah, a woman he deeply admires who doesn’t need rescuing. This is a theme in Tom’s life because, as a professional psychologist, it’s common to collect people who need help. Tom accepts Sarah’s offer of her spare room while he’s still getting to know her. A romance blossoms…

Infidelity is a character study with discussion of definitions of infidelity and the consequences of blurring and crossing ethical boundaries.

Completely consistent with Mackay’s sociological research findings, Infidelity is only surprising to those who haven’t read his non-fiction works. However, even I – although unsurprised by events – enjoyed the journey and the resolution as well as the fidelity to sociological fact.

All aspiring writers should read Mackay’s work, his fiction and his non-fiction.

Houseguest by Hugh Mackay gets six out of five stars if such a thing is possible. One day I’m going to get my own copy so I can reread that riveting, challenging, surprising thriller.