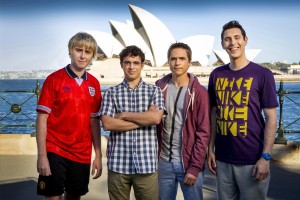 The boys are back and they’re heading down under! Jay has taken his Australian gap year and, realising they need a break, Jay, Simon, and Will decide to join him. As has come to be expected from this British foursome, their journey is full of chaos, banter, and sexual misadventures.

The chemistry between the four main characters is fun and flows well. Viewers of the show will be delighted at some unexpected cameos involved in some unexpected activities.

Saying that the humour in The Inbetweeners 2 and its predecessors is filthy is like saying that there are a few boobs and deaths in Game of Thrones. However, if you have a wickedly filthy sense of humour then you will not be disappointed by the vile jokes throughout The Inbetweeners 2. Personally, this reviewer laughed until tears streamed down her face.