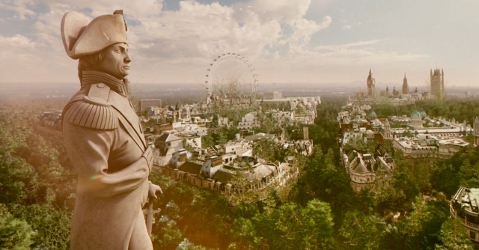 Clara and Danny have an overnight excursion to the museum with the gifted & talented class except later Clara says she only tells them they’re gifted. Sif the school didn’t make that choice. And the kids — omg, the kids. I’m guessing the writer hasn’t ever been on a school excursion with a gifted & talented class. There is So. Much. potential for humour and heart that totes flies by untapped while we follow the children. (Do these kids have learning difficulties? They obviously have behavioural issues.)

The Doctor arrives in a forest, looking for Clara, but he’s supposed to be in London. A child who escaped the supervision of her teachers wearing a red coat with a hood is skipping through the forest (my very first thought was ‘little red riding hood’). So of course the child finds the big bad wo— I mean, she finds the doctor. And says that she’s been sent. And she understands the TARDIS is bigger on the inside. (When are writers going to stop trying to subvert that tired old joke?)

The only way the girl seemed to make sense was if Clara sent her but no, the mystical force behind the forest sent her. Why? I have NFI. Oh, wait: BECAUSE PLOT. Also because there wasn’t enough actual story to fill the time so they had to make some extry stuff up, so strange girl being all knowing and otherworldly totes fills in the time. Because the fans won’t notice that this is another story as palatable as toad-in-the-hole. You know what toad-in-the-hole is? Take a bunch of leftovers — it doesn’t matter what, but let’s say leftover sausages and steamed/boiled vegetables that no-one could bring themselves to eat last night — and chuck them in a flour-and-water mix and cook the fuck out of them in an electric frypan. It’s terrible, only for the desperately hungry and even then slather on some kind of sauce to hide TEH BLAND. This kind of leftover mix surrounded by stodgy filler seems to be par for the course in most episodes of Doctor Who this season. So much potential for the gourmet fewds, so much disappointment.

Where was I? Oh yeah. So the forest grows up overnight. You can’t cut the trees down. Authorities start trying to burn the forest because BURNING TREES IN THE MIDDLE OF LONDON IS A REALLY GOOD IDEA. Not.

The Doctor has to figure out what to do. And who to help.

Clara and Danny fight because Danny wants Clara to stop lying to him. He NEVER says not to hang out with the Doctor, he just wants Clara to stop lying. Why does she lie? Maybe because Moffat is a misogynist who has decided that Clara is a control freak… only lying is not a sign of control issues. And we’re only TOLD Clara has control issues while, in contrast, we’re SHOWN Clara having truth issues that have nothing to do with control. Other than control of information that, of course, sabotages her goals.

Clara finds Danny’s care for the students sexy but doesn’t have a similar commitment to him or the students. Oh, maybe. Wait — no.

The forest appears overnight to save the world. Then, world saved, the forest fucking disappears magically, without a trace, leaving London exactly as it was. Not one cracked road AFTER TREES WERE GROWING EVERYWHERE. Seriously?!

The title ‘In the Forest of the Night’ is clearly a reference to the William Blake poem ‘Tiger, tiger, burning bright, in the forest of the night, what immortal hand or eye dare frame thy fearful symmetry…’ As the forest was there during the day this seems a remarkable misnomer. This zode was another soapie episode. Seriously, if I want relationship drama and carry-on as the major plotline, I’ll watch a soapie. Oh, wait, NO I WON’T BECAUSE SOAPIES BORE ME.

‘In the Forest of the Night’ is, possibly, my second-least favourite episode so far, only beaten by ‘Kill the Moon’. That, looking back, I overrated by at least half a star.