In My Past Life I Was Cleopatra: A sceptical believer’s journey through the New Age is part memoir, part caution, part sales pitch. Part of “The World of Woo Woo” chapter includes a table to define your level of “woo”. I find myself in the second column, “Woo-curious”. However, I found much of Awad’s story surprisingly relatable.

Awad recounts her history as an Arab Muslim growing up in Australia. She found Greeks and Italians more relatable than others because they were more likely to live embedded in religion and superstition.

As a child, religion provided impetus for OCD – whether that was cause or affect, it was a correlation. Later, traversing the world as an adult, Awad delved more into the superstition, exploring a diverse array of Mind Body and Soul (aka New Age) modalities. Some helped her. Others not so much.

Awad describes herself as a “skeptical believer” because she wants evidence, even if it’s experiential benefit. She recognizes the attraction of the spiritual for many, and allows for others to find benefit where she does not. Thus, the “true skeptic” may find this book unrelatable.

Read or do not

If interested in this book, then read it. Form your own opinion of Awad’s book and the New Age.

What follows in this review is partly review specific and partly a response to a small percentage of Awad’s material.

Awad’s book and the New Age itself are highly contentious that will be beloved by some but not by others.

Read on at your own risk…

From Preface to Conclusion, In My Past Life I Was Cleopatra has 11 chapters. Later additions include an index and more. Those 11 chapters cover a diverse field. Some of it is experiential. And some of it reads like a sales pitch, with Awad interviewing people with whom she is proud to claim friendship and a history. However, some of it reads like a warning. Like the warning against putting porous “gems” up your “hoo-ha” (vagina) and the warning against drinking any #CrystalElixir imbued with aluminum and the like.

Warnings I’d like to add: The 7 habits of Highly Effective People

Awad lists many books and authors that are so prominent they’ve “seeped” into the collective unconscious. People like Stephen Covey with his renown book The 7 habits of Highly Effective People.

Perhaps it’s just me. But, back in my Tabor College days studying counselling, a lecturer prescribed Covey’s books. I read enough to realize that Covey had this fabulous lifestyle despite a crowd of child-dependents. Covey’s wealth and his hard-working wife enabled Covey’s habits and lifestyle. His habits may have some grains of truth but his lifestyle is aspirational only for the majority of people.

Awad has obviously read widely and has included specific titles in her own book for various reasons with her own commentary.

Warnings I’d like to add: How to win friends and influence people

How to win friends and influence people has been re-released with updated examples many times over several decades since its first publication. Carnegie has simple rules for communication with people that help “grease the wheels” between acquaintances, work colleagues and business people wanting to make money from strangers in the street. I found this book helpful as a teenager and have re-read it periodically since. However, it needs to be balanced with other points of view, like The Asshole Survival Guide and Stop Being Reasonable, which Awad does not mention.

Awad says  in an apparent non sequitur that “the reason why we secretly love Dr Phil is because we wish we could have him over for a lamb roast and talk about healing our inner child”. HELL NO. Back when studying counselling I watched a few episodes of Dr Phil and read (tried to read?) one of his books. I LOATHE HIM. He’s obnoxious, arrogant, simplistic… His approach may work for some people but not for this little black duck. Perhaps it’s a cultural reaction? But Awad is Australian… (shrug)

My response? Authors tend to predict the future quite frequently. Look at Orwell, Atwood, etc; but then these people were looking at society. Atwood said she did not use anything in the Handmaid’s Tale that had not previously happened somewhere because she didn’t want to be accused of having an evil imagination. And now it appears that right wing politicians want to bring the Handmaid’s Tale – or much of it at least – into being in our lifetimes. So is that psychic? Or is that research and observation? As Awad says, “a golden rule of psychics seems to be to make many predictions, mostly vague… and get something right” (p.103).

Apparently Gwyneth Paltrow and her company Goop promote vaginal jade eggs as a health product (p. 106). I had to do a double take because the first time I heard of balls (eggs?) for women to insert, they were a sex toy that, apparently, some women might indulge in during the normal course of events. Like, walking around town, on a plane flight, etc. But these were made of non-porous materials. Purveyors did not promote these sex toys as a health product – unless, of course, you mean a healthy sex life.

My mind boggled at this  knowledge then and I still find it amusing because the stimulation is supposed to result in orgasms, the timing of which could be problematic. Especially in public. But apparently Paltrow’s aren’t sex toys. I think.

Awad certainly shies away from this with horror, repeating appeals to women to NOT put porous items in their “hoo-ha” for legitimate medical reasons.

Awad’s discussion segues into discussion of how the medical establishment does not take women’s health seriously, prioritizes men’s health to the point where drugs tend to be tested on men although women metabolize drugs differently.

However, she doesn’t mention that Viagra, for example, is apparently a good drug for menstrual cramps. Pharmaceutical companies overlooked these benefits because men need their hard-ons. They consider men’s erections a better investment than addressing women’s menstrual pain. Awad has done her research though!

However, if ever a New Age book is feminist, it is this one. Awad meets women where they’re at. And, although men aren’t excluded, she addresses a few of the elephants in the room, including that the New Age has more women adherents than men. I wonder if it’s because institutional religion was established and usually remains in control of men, with themes of repressing women to “keep them in their place”, “wives submit to your husbands” etc. Lately I’ve read a spate of novels about how religious men have persecuted and murdered women as witches for being healers, wise women, midwives and so on. Awad’s book felt like a logical step in my reading, inducing me to ponder the battle of the sexes as “Christian” (and possibly Muslim) vs “witch”.

APPARENTLY A WOO-WOO DEBUNKER FOCUSING ON WOMEN’S HEALTH GIVES RATINGS IN “PALTROWS” because Gwyneth is notorious. Awad’s expose is wryly amusing at times.

Awad details sceptics who abhor and expose predatory behavior, those wanting to make a buck at the expense (literally and figuratively) of the vulnerable. I get the vibe that Awad is a fan of those sceptics although she does not always agree with them.

“‘We need to stop shaming women for being stupid or for being vain and we need to dismantle the structures which feed these dangerous attitudes. Take women seriously when we say we’re in pain…” (p. 108).

Interestingly, Awad’s description of Aura-Soma practice (p. 219-224) sounds very much like Gestalt Therapy in counselling. The Gestalt Therapy practitioners I’ve known have primarily been men although I was taught – sideways, without mention of Gestalt Therapy – by some women lecturers.

Aura-Soma may well be a means for women to help others and for women to seek help without suffering the vagaries and prejudices of the counselling industry. Awad’s description is both completely different from a highly successful counselling technique I developed but it resonates so strongly… I wonder how many of the women survivors of childhood sexual abuse and domestic violence I could have counselled but haven’t because of disability discrimination destroying my career. And how many of them have found help in Aura-Soma or other similar New Age modalities?

You are not your trauma

Awad talks to Angela Lyos Braun about meditating to find Bliss (contentment, beauty): “You are not all this other stuff: where I grew up and all these things that happened to me during my childhood”’ p. 248.

Awad discusses many pertinent issues from the capitalism-ization of spirituality to finding help and healing in a journey.

Partly this book is a shopping list of books and New Age modalities with a quick overview of Awad’s feelings on those topics.

Her book is, at turns, funny, charming, engaging and – I confess – a teeny bit irritating. Irritating because I’m not a fan of “I interviewed my friend the famous X” trope. Also not a fan of “I couldn’t get an interview with Y until I shone as someone special in a workshop” trope.

However, any book about the New Age that manages to include Duchamp’s Fountain as a relevant example and inspirational quote deserves a recommendation.

I recommend In My Past Life I Was Cleopatra – spoiler, she’s a skeptic on that point – to readers who want an introduction to the New Age, who are “Woo Curious”, who want to know more to be able to relate to a friend or family member, and to authors considering writing fantasy stories. I’m not relegating this novel to the “fantasy” genre, but the materials therein could help inform a fictional work. It’s a good place to start your research. 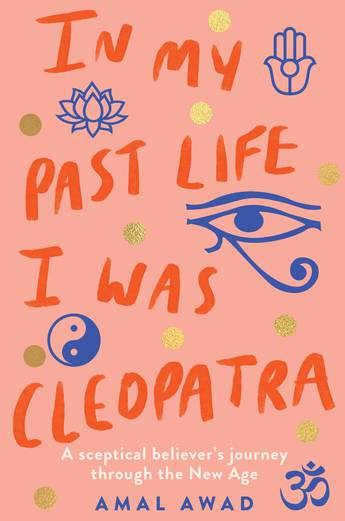