In Defense of the Princess: How Plastic Tiaras and Fairytale Dreams Can Inspire Strong, Smart Women

In Defense of the Princess arrived last week. As a non-fiction book about princess culture and fairytales, I felt I had to read it immediately. After all, I’d had concerns for CJ Dee’s sanity so here was an opportunity to engage with her obsession… and, maybe, learn something on the way.

Fine grew up obsessed with royalty, much to the horror of her egalitarian hippy parents. I have to put this down to the similar generational cycle that makes the child of the alcoholic a teetotaller and vice versa. (I was more inclined to put ‘egalitarian hippy’ into the relatively healthy teetotal category but I read on.)

Chapters of text either eulogize or apologize for princesses. (‘Apologetic’ means ‘constituting a formal defence or justification of a theory or doctrine’.) Fine lists Disney princesses, touting their strengths while glossing over their weaknesses and vulnerabilities. She defends a girl’s right to role play as a princess, urging mothers to speak to the inner princess: ‘What would Snow White do?’

When I was about 6 I read Cinderella and Snow White. To me, their message was ‘be passive and, one day, if you’re really lucky, someone will think you’re pretty enough to rescue you’. I was certain no one would rescue me so I wanted to be empowered to rescue myself. I became more interested in Greek and Roman mythology and Aesop’s fables than princesses. Fine challenged my views of princesses in fairy tales and in reality.

To some extent Fine was successful: I came to realise princesses have strengths and virtues that should not be discounted.

One of Fine’s favorite Disney princess is the Little Mermaid; unfortunately she seems unaware that the original Little Mermaid not only lost her voice but every step she took on land felt like knives stabbing her. She risked everything for the man she’d saved, only to be passed over then to pass away. Into the ocean to become a bit of foam, tossed eternally on waves. This version wasn’t mentioned. Just sayin’.

Fine brings some balance to the feminist anti-princess argument but In Defense of the Princess is not an academic work nor is it well researched, relying on anecdotal evidence and emotive language. Fine challenged my views on princesses and frilly feminine fripperies. Sadly, I saw past the challenge — that has some validity — only to focus on the errors in Fine’s assertions that undermine her argument.

For example, Fine says that Princess Leia from Star Wars ‘eventually’ entered the Imperial Senate and that she had ‘extensive’ Jedi training. Fine attributes Wonder Woman’s creation only to her male creator, not to his two co-wives (Ann Masuuchi’s essay ‘Wonder Woman Wears Pants’, ‘Imagining Wonder Woman’ podcast and The Secret History of Wonder Woman by Jill Lepore.). These may be minor facts relating to fiction, but then she claims that Edward gave up his throne to marry divorcee Wallis Simpson although he married her, reigned briefly as king, then was forced to abdicate because he was a Nazi sympathizer. (Cue rants about Captain America whom fans will depose. Thanks Marvel.)

On girls’ toy aisles and color-coding products, Fine is fine. So what if the girl’s laptop is pink? Fine doesn’t seem to have compared the functionality and appearance of the toys although it’s been done for her. Fine offers no comment on Lego’s gender stereotyping. She claims that it is scientifically proven that gender-neutral toys offer no benefit — in spite of research to the contrary and current moves to amalgamate toy aisles.

Fine has a two-dimensional view of gender: male or female, with traits being traditionally one or the other. She talks about men having or acquiring ‘feminine’ traits and all women wanting to find their prince and live in a castle. With the latter point, Fine’s arguments would have carried more weight if she’d mentioned the Solo Wedding craze in Japan rather than attributing the desire for a wedding to role-play as a princess to ‘all women’.

Although my knowledge of princesses real and imagined is quite limited, I saw errors and flaws undermining Fine’s arguments.

In Defense of the Princess has some valid points, bringing some balance to the anti-princess aspect of the feminist movement that judges girls and women for role-playing princesses and being interested in feminine pursuits such as fashion. Fine’s arguments would carry more weight if she focused on facts by checking her assertions for accuracy and refraining from sweeping generalisations. Although this is no Mackay or Biddulph sociology- or psychology-for-the-layperson book, In Defense of the Princess seeks to be a counterweight argument balancing feminist discussion of gender and role-play. In spite of its flaws, In Defense of the Princess will inspire discussion, which is a good thing. 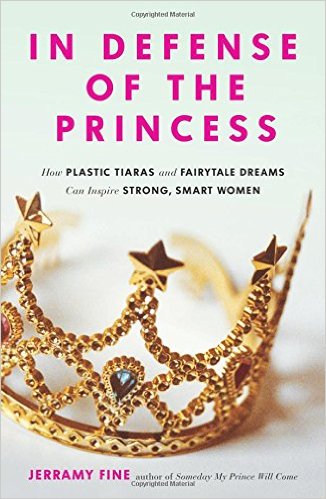