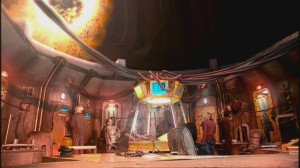 The Doctor (David Tennant) and Rose (Billie Piper) land on a mysterious space station located on an impossible planet orbiting a black hole. The inhabitants are perplexed as to how the Doctor and Rose found them but don’t press too hard for answers.

Upon realizing where he is, the Doctor is perplexed as to how the inhabitants found the planet and survived landing there. How and why they found the planet remains a mystery although I would have thought it was key to the plot.

MINION: That’s a bit of a HOLE. [chuckle]

We meet a small crew whose goal is to salvage an anti-gravity device capable of withstanding the pull of the nearby black hole. How they intend to both salvage it and escape unharmed is perplexing.

Toby Zed, an archaeologist, has been researching artifacts found on this planet circling the black hole. It’s comforting to think scavengers are such civilized people, taking an archaeologist along on their grave-digging trips. However, it’s unclear how they found the artifacts as the ancient city is at the bottom of the drill shaft that the Doctor and Ida are the first to traverse. I guess they found shards on the surface while they set up their extensive habitation, meandering over the surface of a planet orbiting a black hole.

The Ood appear for the first time, introduced as a genetically engineered slave race whose sole purpose is to serve. Although Rose initially seems concerned about the Ood, she quickly changes her mind when they become a threat.

‘Impossible Planet’ is the first of a 2-part story, ending with ‘The Satan Pit’.

‘Impossible Planet’ is deeply flawed, as are many Doctor Who stories. I thought resuming Doctor Who in the 21st century would have meant a rise in the overall standard of production while simultaneously keeping all the good stuff. Instead, this story is a reminder that Doctor Who writers are under the hammer to produce content FAST rather than focus on quality writing. Additionally, to really flesh out this story effectively, it needed more time than just the two episodes.