On Tuesday, some of Team Dark Matter set out to explore the IMAX theatre in Melbourne. Evie Kendal, Zach Kendal, Daniel Haynes (aka deth the Starcraft pro-gamer), Edward Haynes and I met up for dinner at Wood’n’Chimney then embarked on an adventure – a behind-the-scenes tour of the IMAX cinema. Along the way we met Stephanie-Krystle Chin (Australia’s Twitter Queen) and Grant Alexander (Steph’s BF – evidence of a Twitter romance). After drinks at the bar – they sell a very nice ginger beer mixer – we trooped into the elevator and up to the projection room.

There isn’t a lot of space in the projection room, it’s definitely one way to get up close and personal with total strangers. Racks of film, a floor stand loaded with current movies and a fork lift truck are just some of the paraphernalia filling up the room besides the digital and film projectors. Don’t let the IMAX glossy image fool you – this room was MUCH more crowded, PACKED with technology, than their image portrays.

For more of the actual specifications go to the IMAX film page and the IMAX digital page. A few pointed questions were asked like how much do the projector globes cost. The answer – about $10,000 each, and they have a limited lifespan. Each globe has a vacuum or close to a vacuum inside so they must be removed after a certain number of hours (1200 I think from memory) so as not to cause a catastrophic accident when the globe blows. (Just imagine the globe ‘blowing’ and an implosion inside the projector with the film running…) Once removed from the projector, people wearing special protective suits pierce the globe to break the vacuum seal, preventing an implosion due to accidental rupture of the globe.

After this fascinating behind-the-scenes tour we waited at the bar again while Group Two had their tour. This was when we started chatting with Steph and Grant. Ushered towards the cinema, we collected our gift bags that included a piece of the recently replaced projector screen, a free ticket to an IMAX movie, a short roll of IMAX film, some material advertising upcoming movies and two movie posters – Oblivion and Iron Man 3. 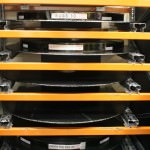 Film racks in the projection room 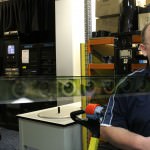 The film itself – it’s enormous! 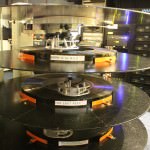 racks of film sitting on the floor 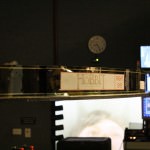 The Hobbit – it takes up a whole tray. I think he said there were two spools for the Hobbit. 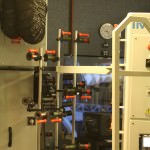 complicated tech to hook up film 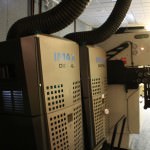 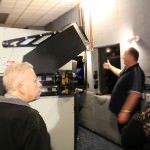 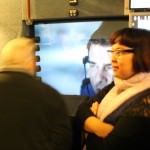 Stephanie-Krystle Chin in projection room with a bit of Tom Cruise in the background – Oblivion was showing. 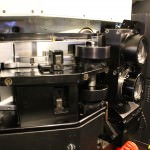 Film projector with two lenses for double the brightness 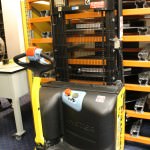 Moving the spools of film takes a fork lift 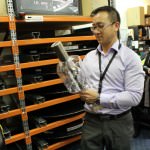 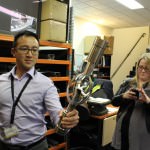 Seated in the sweet spot – the ideal location for video and audio – we watched upcoming trailers including nine minutes of Star Trek Into Darkness in 3D. There were HOWLS OF DISMAY when that particular trailer finished.

‘I WANT TO WATCH THE MOVIE NOW!!!’ bellowed at least one person present. From the other side of the theatre.

I LOVED the IMAX 3D glasses. Other 3D cinema glasses are really uncomfortable to wear over prescription glasses and run the risk of scratching expensive lenses, but not the IMAX glasses. They’re a weird shape and the arms don’t fold in, but they’re light and fit comfortably over prescription specs.

The 3D for Star Trek was impressive too – gotta love that scene where the arrows come right at you, I swear one landed in my heart. I only jumped a little bit. I admit to ducking the one aimed at my head too. I have little to no 3D vision naturally, so cinematic 3D done well and sufficiently close for me to see the 3D effects is a special experience. It’s the reason I love Avatar so very much – Avatar was the first and remains the best 3D experience I’ve had to date, but Star Trek could be a contender.

Once the trailers were over we settled in to watch Oblivion starring Tom Cruise. I’m not a Tom Cruise fan myself, but I was hoping for another Minority Report-type movie where I could look past the lead actor and appreciate the movie. These days I find it impossible to turn off my inner critic, constantly evaluating and assessing movies, TV and books; it’s one of the hazards of being a reviewer. For the first ninety minutes or so of Oblivion my inner critic was switched off while I sat immersed IN the movie thanks to the enormous screen and impressive sound – surround sound that came up through my feet without hurting my ears, a difficult balance to achieve. After about ninety minutes even the IMAX experience couldn’t compensate for Oblivion being an obvious rip-off of Moon with elements of Planet of the Apes thrown in. Guys, seeing the Statue of Liberty as the big reveal at the end totally worked in 1968, but seeing ruins of iconic landmarks OVER AND OVER AGAIN with NOTHING ELSE SURVIVING does NOT work in 2013. The difference between watching Oblivion in IMAX and normal cinema was the experience: in normal cinema I would have been spewing, wanting those hours of my life back. In IMAX I felt that the movie was about half an hour too long but otherwise enjoyable for the IMAX experience.

And Dan was SO ENTERTAINING if somewhat embarrassing. As soon as the credits started rolling, he started RAGING about Oblivion. Dan took it very personally – he loves Moon so much I think there’s a bromance happening unbeknownst to the object of Dan’s hero-worship, Duncan Jones. We usually sit in the cinema until the very last of the credits have finished rolling so the menz can read who was involved in the movie-making and we never miss the final scene at the end that is a reward for watching the credits. Not so on this occasion. We left with Daniel in full rage, collecting together to talk about the movie and the experience in the foyer, thanking Clinton of IMAX for the experience before walking outside to continue our discussion of Oblivion.

ONE AMONG US felt that two hours of Tom Cruise was definitely appealing. Not pointing fingers at anyone. SHE KNOWS WHO SHE IS.

I’m definitely going back to IMAX. Clinton said their documentaries are really popular; the big screen gives the feeling of immersion IN THE WATER for scuba-diving docos and the like. As I couldn’t ever go scuba diving – I panic at the thought of being underwater and trying to breathe – an underwater doco immersive experience is VERY appealing. I love images of beauty like the Great Barrier Reef, one of the dying Wonders of the World.

And Star Trek Into Darkness was just SO DAMN GOOD on their screen I think I’ll have to see it there. Having avoided trailers and spoilers and then seen…