The panel for National Science Week‘s I Robot showing discussed the science in the movie after watching Will Smith’s biceps and pecs — I mean the movie.

I Robot is a Frankenstein story about a man’s fear of robots that may not be unfounded but no one believes him; he’s crazy. It’s a timeless movie that holds together well 12 years after release. As part of National Science Week the viewing was followed by a panel of scientists discussing sciency things for science week at Palace Cinemas.

Notice the camera on the table pointing at the audience? The guy on the panel said it’s a robot and also talked about how “Google” (other panelists corrected him and cited Facebook) was performing mass social experiments on users without their knowledge or permission. He was enthusiastic about unauthorized social experiments.

The other panelists talked about ethics and how, if such an experiment was conducted through a university, the ethical submissions, forms and constraints would be overwhelming.

At least one person did not engage with the panel because of this camera/robot. He did not want to be included in any potential “social experiment” without full disclosure and his consent.

I personally hated the robot. At one stage the guy turned on its lights. From that time onwards there was a bright ring of lights surrounding the camera lens shining in my eyes and some green lights on the side. I’m photophobic (bright lights hurt my eyes). He kept maneuvering the camera so it was pointing at different people but its lights were the brightest thing in the room, destroying any hopes I had of actually seeing the panel.

The rest of the panel — three kick-ass women scientists — were absolutely awesome, talking about crowd-sourcing the building of enzymes using FoldIt, the safety/hazards of driverless cars (human drivers are the biggest risk but you can’t have VHS and Beta driverless cars, they need identical programming to be safe), ethics in science and more.

Tonight’s feature is The Martian followed by another kick-ass panel of scientists talking sciency stuff.

Apologies: the scientists and their bios were read out at the event. I didn’t record the introduction and, although I’ve found advertising for the event, I can’t find any list of the participants. 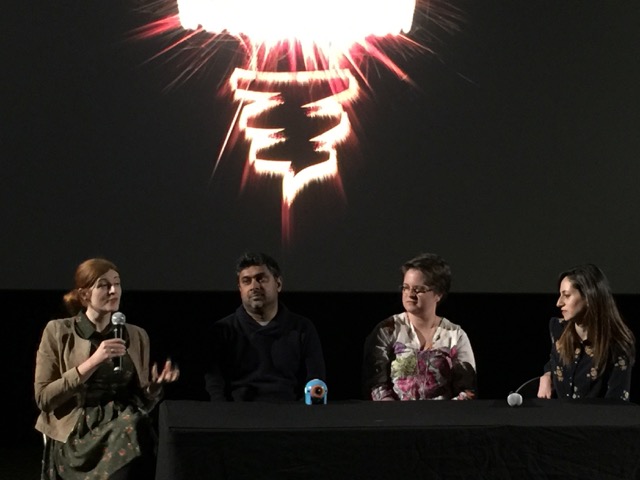