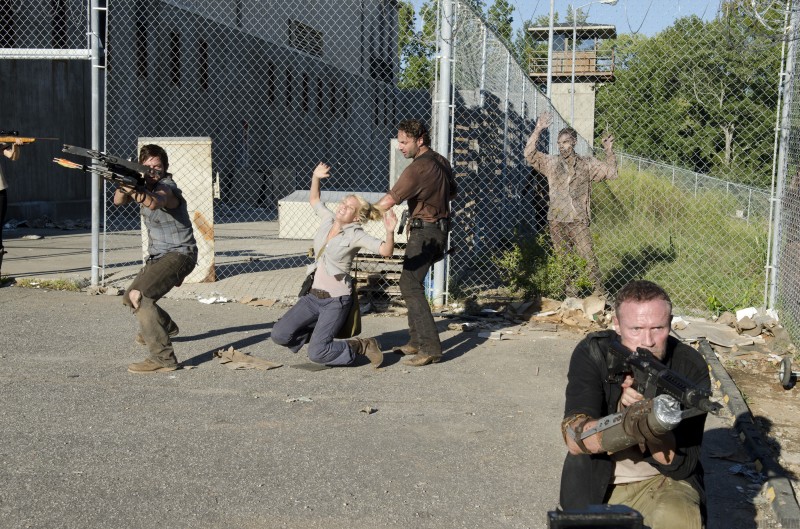 ‘I Ain’t a Judas’ begins with Merle (Rooker) giving Rick (Lincoln) a reality check of who they’re up against and insisting they leave the prison. Hershel (Wilson) agrees with Merle, but Glenn (Yeun) stands by Rick insisting they stay.

Carl (Riggs) speaks to his father alone. He tells Rick that he deserves a rest and should stop being the group’s leader for a while, to let Hershel and Daryl (Reedus) take over.

Andrea (Holden) confronts the Governor (Morrissey) about shooting up the prison. He lies and tells her they shot first. The Governor tells Andrea that if she goes to the prison, she stays at the prison.

Andrea tells Milton (Roberts) that she is going to the prison to try to organise peace. Milton refuses to cover for her, but she manages to convince him — or so she thinks. He goes straight to the Governor and tells him what she has asked. The Governor tells Milton that if Andrea has asked for help, help her.

With Milton’s help, Andrea uses the technique for blending in with zombies taught to her by Michonne (Gurira). They remove the jaw and both arms rendering a walker harmless and Andrea uses it for camouflage.

Milton and Andrea run into the group chased from the prison by Rick. Milton leads them back to the town of Woodbury where the Governor welcomes them with open arms.

Andrea goes to the prison with her walker bodyguard and is met with distrust from everyone except Carol (McBride). Andrea tries to convince the group to call a truce and move to Woodbury. The refusal is unanimous. Carol tells Andrea she should sleep with the Governor then kill him as he sleeps. Michonne and Andrea clash before Andrea returns to Woodbury.

Andrea returns to the Governor and tells him about the conditions at the prison.

‘I Ain’t a Judas’ ends with the Governor asleep after sex with Andrea. The still naked Andrea holds a knife to the Governor’s throat, but she does not kill him.

I have strongly disliked Andrea for a long time. This episode has done nothing but solidify that dislike. On the flip side, this episode is one of the few where Carl speaks and I thought what he had to say was important, relevant, and even interesting.

‘I Ain’t a Judas’ is filled with drama and it more than makes up for the significant lack of action.

“When the Governor returns, he’s gonna kill me first. Michonne, my brother, then your girls. Glenn, Carl, the baby, whoever else is left. He’ll save Rick for last so he can watch his family and friends die ugly. That’s who you’re dealing with.”