Hunt for the Wilderpeople is a family movie with a PG rating based on Wild Pork and Watercress, a book by Barry Crump.

Ricky (Julian Dennison) is a troubled teen forced into foster care because “he’s trouble, this one”; according to his care worker, Paula (Rachel House), he litters, graffitis and other minor offences. But then Paula is a total bitch who hates children and especially Ricky.

Paula drags Ricky to Bella (Rima Te Wiata) and Hec (Sam Neill) for foster care. Bella is a loving if inept carer who, eventually, makes an impression on Ricky, teaching him Maori ways.

Then Bella dies, just when Ricky has become accustomed to their strange little life and sees a hot water bottle as evidence of Bella’s love.

Ricky wants to stay with Hec but Paula won’t let him, she intends to relocate Ricky with a new family. He runs away (again) but this time gets a bit further. Hec follows and breaks his leg. By the time he’s fit to walk out of the bush, Paula and the police denounce him as a kidnapper. A manhunt begins.

Hunt for the Wilderpeople is Ned Kelly (a 19th century Australian bushranger hero) turned family fun. A small predominantly male cast prevents it from passing the Bechdel Test but it (obliquely) looks at Maoris and how they’re treated differently from whites. Innocence blends with innuendo to create laughs for older viewers while kids will love Jay’s outrageous and courageous character. Highly recommended. 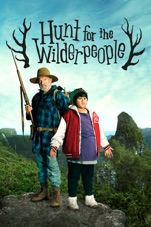