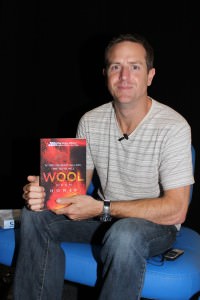 Hugh Howey in the Limelight

Hugh Howey, guest of Supanova in 2013, started as a self-published author but is now published by large publishing houses and his bestselling novel Wool has been optioned for a movie.

My Wool series became a sudden success in the Fall of 2011. Originally just a novelette, the demand from Amazon reviewers sent me scurrying to write more tales in this subterranean world. The resulting Omnibus has spent considerable time in the Amazon top 100, has been a #1 Bestseller in Science Fiction on Amazon, and was optioned by Ridley Scott and Steve Zaillian for a potential feature film. The story of its success has been mentioned in Entertainment Weekly, Variety, and Deadline Hollywood among many others. Random House is publishing the hardback version in the UK in January of 2013.