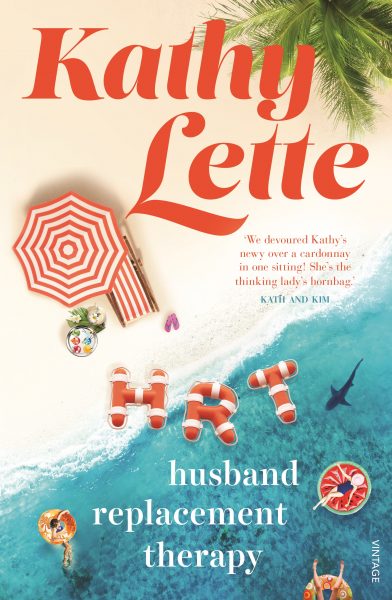 HRT: Husband Replacement Therapy opens at Ruby Ryan’s 50th birthday when she drops truth-bombs until she bombs herself into social Siberia. In her defense, she just discovered her husband had an affair and she’s got terminal cancer. Both within hours on the day of the party.

Ruby’s dying wish is that she and her two sisters, divided by their mother, should reunite and re-bond during a cruise. On a cruise ship. There are one or two clues that this novel was started pre-Rona and finished before lockdown. Anyhoo, in a drunken stupor on the afternoon after the double-whammy but before the birthday party, Ruby bought three tickets for a cruise. Next step: convince her sisters to join her.

Husband Replacement Therapy has three distinct acts. Act one reads like a stand-up comedy act, needing only a “boom-tish” soundtrack to complete it. The second act launches Ruby into a romance, which is a comedic delight. Act three brings the previous two acts together, tackles family issues and the Christmas From Hell. Need I say more?

Lette despises Ruby’s mother. She’s a two-dimensional villain. And so similar to my experience of my mother that I struggled to find humor in the portrayal. Having said that, how is a realistic portrayal a bad thing? Mommie Dearest is also a relatively minor character although she’s a primary influencer of her daughters’ lives and animosity towards each other.

In comedy, timing is everything. When I started reading Husband Replacement Therapy and realized Ruby is off on a cruise, I was somewhat taken aback. I mean, cruise ships are a thing of the past, surely? Or only Trump- Boris- and ScoMo-supporters will book? Surely!

Around the Christmas From Hell, Ruby notices smoke from the bushfires. This was almost a throwaway comment but it’s there, alongside her “Insular Peninsula” jokes. (In Melbourne the “Insular Peninsula” would be Mornington Peninsula but I have NO CLUE where it is in Sydney, and this book is definitely set in Sydney. When it’s on land and away from floating petri – I mean cruise ships.)

Very late in the novel, Lette references the coronavirus. I guessed she slipped that in during last-stage edits, which happened before she realized lockdown and tens of thousands – possibly hundreds of thousands – of people are going to die of the dreaded Rona. And then I interviewed Kathy Lette who is a comedic delight in person as well. She confirmed these references were slipped in during January and late-stage edits.

These comments place HRT in a specific window of time and yet it’s a period of time I expect we’ll look back to nostalgically while the right-wing governments Lette despises lead us out of lockdown because “wealth before people”. I look forward to Lette’s next novel that will probably eviscerate and lampoon this era while also delving into issues regarding Women Of A Certain Age. From Puberty Blues to HRT, Lette speaks the unspeakable, makes it funny and yet relatable every time. Puberty Blues was the first movie that I took myself solo to the cinema to see, when I was 13. The teens in that movie were shocking and yet so relatable and I loved them for empowerment. Lette has continued this theme down through the decades.

HRT: Husband Replacement Therapy is a book about middle aged women shaking off expectations to reinvent themselves. It’s hilarious, scathing and grounded in the months between about September 2019 and January 2020. The three acts are very different in rhythm and style, but the first act alone is like attending a stand-up comedy show. I laughed so much! HRT is much-needed Rona relief. If Lette was a man, this would be “a book about what it means to be Australian”, “about life” and “a satirical plunge into middle age”. So read it, review it, and make it so. Cheers!