How to get blackballed by a reviewer

Reviewers blackball authors (refuse to review authors) when authors rub reviewers up the wrong way.  Like many other reviewers, I have pet peeves around authors pushing their books.  One of mine is people who want follow-backs on twitter etc, then all they do is spam ads for their shit.  Another of my pet peeves is the personal email request to purchase an author’s book so I can review it.  More recently I developed a new pet peeve.

I received a ‘friend’ request through Goodreads.  I accept all those requests although I’m not on Goodreads enough to interact with people there.  It’s ok if they’re happy <shrug>

I’ve had authors friend me on Goodreads then send me ‘invitations’ to ‘events’ to BUY THEIR BOOKS.  Can anyone say ‘unfriend’?  After the first few times this happened, I changed my profile bio and started unfriending these people on the first offence. 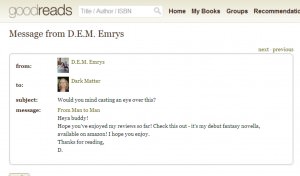 ‘Check this out – it’s my debut fantasy novel, available on Amazon! I hope you enjoy.  Thanks for reading.’

I was so pissed off I unfollowed him immediately.  That should have been the end of it, but almost immediately HE SENT ME ANOTHER FRIEND REQUEST.

HE WAITED FOUR MONTHS AND THEN SENT ME ANOTHER FRIEND REQUEST.

By that stage I’d forgotten WhoTF he was and accepted, only to realise who he was and unfriend him again.

I set about learning how to block people on Goodreads so he will NEVER be able to send me email requests or friend requests again.  I was so outraged after the ongoing friend requests I even outed him on Twitter.  This was his response:

@darkmatterzine And I don’t remember emailing you to buy my book? Sorry if you think that I did. I actually only asked ‘How’s things?’

Not impressed.  If you fuck up, own it.  Offer a REAL apology, not one of these half-arsed pretences of an apology that actually puts the fault with the OTHER person.  I don’t THINK that he emailed me asking me to buy his book, THE EVIDENCE IS OUT THERE.

@darkmatterzine Again, apologies, it was my own fault for utilising the goodreads function of ‘find friends using twitter’.

Again David is pretending to apologise while in reality his message to everyone is that he’s been a good little boy and hasn’t done anything wrong, while the big bad reviewer is being unreasonable.  How to win friends and influence people.

Well, David E. M. Emrys, I will not read your book.  As my reviewers have a wealth of  free books for review, I won’t recommend your book to them either.