IMDB describes How to be single:

There’s a right way to be single, a wrong way to be single, and then…there’s Alice. And Robin. Lucy. Meg. Tom. David. New York City is full of lonely hearts seeking the right match, be it a love connection, a hook-up, or something in the middle. And somewhere between the teasing texts and one-night stands, what these unmarrieds all have in common is the need to learn how to be single in a world filled with ever-evolving definitions of love. Sleeping around in the city that never sleeps was never so much fun.

In the beginning, Alice (Dakota Johnson) starts college. She walks out of her room dressed only in a towel, carrying her toiletries. She drops her toiletries and her towel. Josh (Nicholas Braun) comes to her rescue, wrapping her in his towel, then realizes that his towel was the only thing he was wearing. Awww.

Alice went from her parents’ home to college and a relationship with Josh and now she wants to engage with life, find out who she is while she’s single. Four years later, she wants a break so she can learn what it’s like to be single.

After her one night stand with Tom, Alice wants to get back with Josh but he’s found someone else. Alice is devastated.

At her new job, Alice meets Robin (Rebel Wilson) who shows her how to party. Robin is screwing her way around New York and enjoying it. They go to Tom’s bar one night.

Tom (Anders Holm) is a total dick. He’s an honest dick, though: he screws Alice then is completely open about how he sabotages any attempt at closeness by the many women he fucks on a regular basis. He has no food in the fridge to prevent attempts to make breakfast, he’s disconnected the water in the kitchen, there aren’t any cups or glasses to drink from and his clothes are stashed in the kitchen cupboards. Alice challenges him on what happens when he gets thirsty: he has a bar fridge disguised as a bedside cupboard. Alice knows where she stands with Tom but they remain friends.

Lucy (Alison Brie) lives upstairs from Tom’s pub. She’s desperate for wifi so leans out the window to improve the signal — and drops her laptop. After she replaces it, she goes down to the pub to use their free wifi. Tom calls her on freeloading. Lucy replies that, unless he wants her to make complaints about the noise from drunks leaving at 5am, he’ll let her freeload. Mutual respect.

Wifi is useful when internet dating. Tom is useful when Lucy wants to flee a creep: he gives her the key so she can hide in his office. While Lucy looks for a relationship with someone who could be her best friend, Tom falls for Lucy.

Each story is interwoven with the others, connections through place or one degree of separation.

Rebel Wilson is a good-looking woman who, unfortunately, is dressed badly with that awful hairdo reappearing in yet another movie because her role is ‘hopeless fat chick’ for laughs. Her role in How to be single has distinct similarities to her role in Pitch Perfect. In spite of this, her sexual liberation and dynamism is refreshing: she’s the female equivalent of Tom, played (mostly) without judgment and with the least character development.

Although the voice over at the start of the movie declares this is not a movie about relationships, it is: How to be single is about friendships, family, sex and love. It’s beauty is that the narrative isn’t prescriptive other than to suggest every person needs to find their own way.

Alice is much like Maggie Carpenter in Runaway Bride: she has to find herself before she can retain her sense of identity in a relationship. Alice’s journey is foreshadowed in her breakup scene at the beginning of the movie and rounded off beautifully at the end, allowing the viewer to project their ideals onto Alice.

How to be single has straight white women and men as the central characters with very little diversity. Two people of color serve as love interests and people of color abound in the workplace and in entertainment venues. This movie passes the Bechdel Test because women talk about life, love, their relationships with other women and babies. (Both babies are girls so talking about the babies counts!)

Part of the Love Actually genre, How to be single is current, open-minded and reminds people that singleness and relationships are valid choices made by people who can be happy in either state. I really enjoyed this movie on both a comedic and a social issues level. I highly recommend How to be single, so much so I’m tempted to read the novel.

Can someone please give Rebel Wilson a role where she’s meant to be attractive? With nice clothes and without a bouffant hairdo? PLEASE? 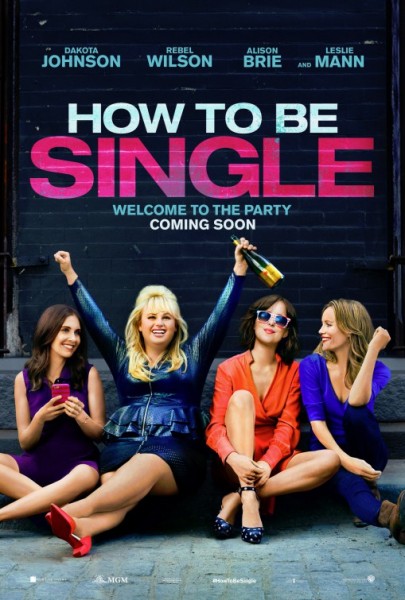