How Many More Women: exposing how the law silences women is an important non fiction expose of how women are currently fighting for their rights. And contending with powerful perpetrators who seek to silence them. Using the authors’ histories of legal practice and other women’s stories, they discuss how perpetrators victimize and traumatize survivors again. From defamation cases to NDAs (Non Disclosure Agreements) to inciting others’ reprehensible conduct, the authors discuss the process and possible outcomes for women who come forward.

Apparently the Me Too movement started in the naughties but it wasn’t until 2017 that the movement really took off. Women started talking to one another after years and even decades of silencing. They realized that, for example, Harvey Weinstein apparently had a long history of abusing and silencing women. He even hired an investigative agency with ex-Mossad agents to investigate and silence the women he’d already allegedly raped and/or abused.

Robinson and Yoshida recount story after story, some with convictions, some without. It’s complicated: in some countries, perpetrators sue women for defamation to silence them because a man’s good name is apparently more important than a woman’s right to speak her truth. In other countries, police charge women with criminal defamation so the legal system can jail them to silence them.

How Many More Women presents a bewildering compilation of hope and despair. Hope because activists are fighting for women’s rights. Instilling hope via women coming together, realizing they’re not alone, and speaking out to stop abuse. Despair because women are living in exile or possibly even in jail after their abusers won.

One tactic perpetrators often use to silence women and even male witnesses is a Non Disclosure Agreement. How Many More Women delves into this arena, presenting a full and fearless account of how NDAs are used, how they can be overcome, how activists campaign to inhibit their use, and more.

How Many More Women recounts many stories, both identified and anonymous. One such story is Johnny Depp vs Amber Heard. This covers a number of law suits. This story is relevant on several levels including discussing the need for evidence, a no-win scenario for the woman, use of an NDA to silence the woman while simultaneously suing a newspaper, forum-shopping and more.

I’ve seen people ranting on Twitter and I’ve seen the Heard hashtags. I thought Heard won but heard that she lost. Robinson and Yoshida delve right into the history. Explosive and cautionary details are revealed: Robinson’s experience of being targeted for abuse for being Heard’s lawyer during the Depp v The Sun case is an education!

Truth is stranger than fiction in the mind-blowing court hearings that ended with the jury finding Heard told the truth but also ordering her to pay Depp $15million WHILE ALSO ordering Depp to pay Heard $2million. Now I understand what happened. And I’m hoping Heard wins her appeal. Perhaps to be included in a subsequent edition?

Pages are redacted. I believe the redactions are, at least in part, due to a specific court case. That trial was scheduled early this year so should have been over by the time of publication. However, it was delayed until this month and now, thanks to sabotage (intentional or otherwise), that trial is now scheduled for 2023.

It’s worth noting, in light of the topic at hand, that the defendant’s lawyers have referred his accuser to the police for speaking her truth.

As a disabled woman who has been targeted sexually, physically, verbally, and experienced refusals of disability access, I am a little disappointed. Robinson and Yoshida sometimes remembered to add “and disabled” to the list of vulnerable groups but not always. None of their examples were of disabled women. Nor did they mention that it’s common for the same tactics to be used to silence non-sexual misconduct and abuse of disabled women. I felt invisible while simultaneously saying “that’s what they did to me”. So my feelings on this are mixed even though nonsexual institutional abuse is not part of the authors’ remit.

How Many More Women: exposing how the law silences women is an essential read for all women. As the authors wryly comment, women need this information before an assault occurs. This is a heavy read, not in the authors’ use of language but in the content. I relived my own traumas while reading this book. It was a hell of a week with many tears, many puppy cuddles and even a Meteor (cat) cuddle getting me through.

Information is power and this book gives one hell of a lot of information. It is better to be armed with information and to have a support network to enable you to make the best decisions possible. For example, in 2007 and 2008, the University of South Australia offered me a partial refund of my university fees conditional on signing an NDA, accepting an expulsion without due process in retaliation for lodging a complaint with the Human Rights Commission, and a permanent ban on education. The $4000 they offered in 2007 and the $3086 they offered in 2008 after ramping up their abuse was not enough. I need the right to talk about those years of my life and that abuse. It was better for me to walk away with the right to speak out.

I urge all women to read this book to inform yourselves to make the best decision for your situation.

How Many More Women is a must read for all women and all allies. It’s a heavy read so if you’ve experienced trauma, get support.

I hope a future edition will include the redacted pages and an update.

I highly recommend the nonfiction book Stop Being Reasonable for people who also love How Many More Women. (Stop is an easier read.) 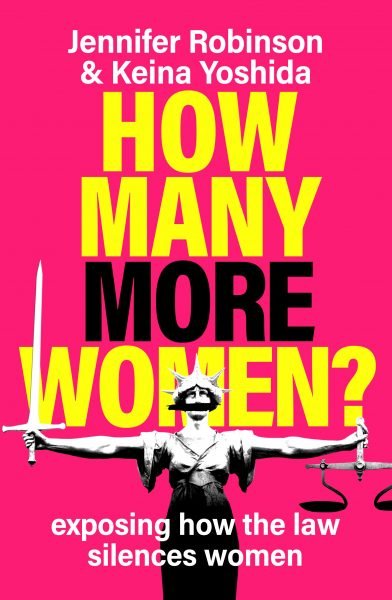 How Many More Women is about how the law silences women. In this light the redacted pages are shocking. Based on what is not redacted, I assume at least some of what is redacted pertains to the Lerhmann trial. DMZ welcomes readers and listeners from around the globe so I’ll endeavor to give a very brief explanation that will be carefully worded and necessarily sketchy.

Last year, high profile journalists reported allegations of sexual assault by Brittany Higgins, formerly a Liberal Party staffer employed in a government minister’s office in the federal government. 4 Corners, a highly reputable current affairs program, released an expose as did a few other media outlets, detailing allegations of rape that took place in parliament house. Brittany Higgins and a few other Australian women – including 2021 Australian of the year Grace Tame – became the face of the Me Too movement in Australia.

Our former prime minister refused to meet with protestors outside parliament house and said the women protesting should be grateful they weren’t met with bullets.

Australian Capitol Territory (ACT) Police are not your friend

After several months and much public outrage, the police charged the alleged perpetrator, Lerhmann. The original trial schedule was for early 2022 in Canberra, my current home city. However, one of the journalists – media personality Lisa Wilkinson – controversially accepted an award. Headlines included the ABC’s “Lisa Wilkinson’s Logies speech blows up criminal trial”.

So, although the trial should be over, the court postponed by about 6 months. That trial recently took place. One of the jurors sabotaged the trial (whether intentional or unintentional) so the judge dismissed the jury. The court scheduled a new trial for next year.

After the jury was dismissed, Higgins spoke to the press about how her life has been scrutinized in contrast to the defendant. And now his lawyers have referred her to police for speaking out.

The bitter irony of this happening while I read this book!

My experience with ACT police

Speaking from experience, ACT police are awful. They refused to charge a professor for assaulting me because senior staff at the University of Canberra apparently instructed them not to despite the evidence. I pressed the point over many phone calls and visits to a police station. Police laughed at me and told me they have better things to do that act on an assault of a disabled woman (me).

The University of Canberra took me to court to silence me. They claimed my allegations of the assault were bullying and harassment. The authors talk about DARVO, a tactic where the perpetrator claims to be the victim; UniCanberra used that tactic.

I am, after all, a disabled woman.

According to police, staff at the University of Canberra told them to harass me for months. Police attempted to abduct me without a warrant, refused to speak to my lawyers and instead repeatedly phoned me and came to my home in groups of three. Their stated goal: to put me in jail for talking about the assaults, abuses and disability discrimination I experienced while I was an award-winning student at the University of Canberra. Or at least force me to plead guilty to false charges.

My thoughts are with Brittany Higgins at this time.