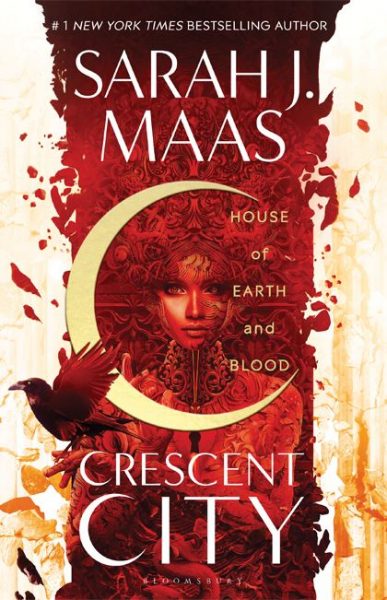 At long last, we finally have the newest release from bestselling author Sarah J Maas. House of Earth and Blood is the first book in the brand new Crescent City series. The book introduces a new world where all manner of magical and non-magical creatures coexist. The protagonist is Bryce, a half-human, half-Fae party girl, living her best life with a colorful group of friends. That is, until a demon brutally murders her best friend and their gang, and destroys her life at the same time.

Two years on and Bryce is trying to move forward. She’s laying low, working for her money and burying her grief and trauma with cool efficiency. She’s doing just fine until there is another attack, just like the one that killed her best friend. Bryce is the key to figuring out the mystery of what really happened that night and how to stop it. And she might just find herself again in the process.

I’ll be straight with you, if you’re already a fan of Sarah J Maas’ previous books, you’re going to love this one too. She captures enough of the elements that make her past novels great, a sassy, strong female lead, eye candy for your imagination, budding romance and sexual tension (oh boy, the tension), but in a fresh setting with a new set of twists and turns.

The set-up over the first few chapters is more laborious than her previous series have been.

This world has more species in a single city and it feels like there has been Tolkien-level world building behind the scenes. Usually this level of texture is a bonus, but in this case it’s really confusing and an information overload right at the start. However, it does ease off and focus more on the main characters. Throughout the story all that early data begins to make sense and find relevance but it’s a heavy start.

One of the things Maas excels at (apart from delicious sexual tension, did I mention that yet?) is writing trauma really well. She doesn’t do the Hollywood shake it off, gloss it over or glorify it. This book is no exception. Bryce deals with the trauma of her friend’s murder throughout the entire story, and considering the book is 693 pages long, that’s no mean feat. It doesn’t make the whole book gloomy but it sure does color her character. She gets triggered, she has healthy and unhealthy coping strategies and she slowly starts to heal. It feels genuine and respectful and as the reader it evokes real feelings. Put aside all the powerful, sexy, smart-arse moments, it’s this that gives her characters gravitas.

Unlike previous series, where the main character has been swept up in fighting an evil being who is trying to take over the world, this plot is different. In essence, it’s a murder mystery plus magic. There are larger evils hovering in the background, who I’m sure we will see more of later in the series. But in this book it’s fun to have a straight up mystery with false leads, twists and turns and, happily, an answer at the end. The result is a book that could be read as a one off without following the series through, and is certainly enjoyable in its own right. The merge of the two genres works well in this case, and is a powerful driver for character development.

Maas certainly had fun with the characters in this story. From a broody and perfectly sculpted warrior angel to a loyal, soap-opera addicted living flame, Bryce is literally the most human amongst the cast. It’s fun to just accept this crazy, colorful world and go along for the thrill ride.

House of Earth and Blood is in many ways more of the same from Sarah J Maas and yet it’s different enough to recapture its audience. After a confusing start, it goes on to excite, entice and inspire for a fun and engaging read. Once you get into it, good luck putting it down. Balanced well with gritty, honest struggle and cheeky, irreverent fun, this is one to devour.

This is the first in the Crescent City series.