Emilia hides a destructive power. If found out, authorities will torture her until she dies. Lucian was a soldier who committed war crimes under his father’s command. Now he wants nothing more than to enter into service in a religious order. Vespir is a servant, a dragon handler. Ajax is an unlikeable bastard son of the head of a house. Hyperia is the eldest child of a wealthy house. Her parents trained her to win this competition. All five must compete to become emperor and head of the House of Dragons.

After the emperor dies, a magical call goes out to summon the competitors. Usually it’s the eldest of every house but this time it is the second child. Vespir’s house had no second child so she, the only child’s lover, is called instead.

Hyperia is determined to rule so she slashes her beloved sister’s throat to take her place, arriving at the Hunger Games covered in her sister’s blood. Way to make a good first impression.

The obvious comparison to the Hunger Games springs to mind. However, the religious leaders controlling this competition specify that they frown upon killing one another. Any infraction of this rule earns demerit points.

I once – only once – played Diplomacy. It’s a game where alliances are made only to be broken. Only losers like me keep their commitments. It’s definitely one way to learn about a person’s character. House of Dragons’ competition requires diplomacy and, likewise, engaging in the diplomatic process reveals character.

Each character’s backstory is essential to the story, adding depth and speaking to the human condition. Diplomacy and backstories together take House of Dragons from your average YA novel to add relevance and punch. Unfortunately, Cluess also relies too heavily on melodrama and “because plot” character pivots, so the story feels uneven.

With a title like House of Dragons, it’s hardly surprising I need to mention Anne McCaffrey’s Pern series. Dragons bond with riders at the dragons’ hatching. I hesitate to say much more because spoilers.

Fairly early on I predicted the ultimate outcome, even suspecting something along the lines of the last chapter titled “Elsewhere” that is, in effect, a teaser for the next book. However, House of Dragons is a satisfying story for a young adult reader, with a satisfying ending.

Although I’m no fan of melodrama, I loved lengthy portions of House of Dragons. I admire Cluess’s insight into the human condition and the manner she wove social comment into the novel. Cluess is an author to watch.

House of Dragons will appeal to YA readers, dragon-fanciers and those who, like me, love stories that engage with social issues. Read this book if you love McCaffrey’s Pern series and Collins’s Hunger Games. 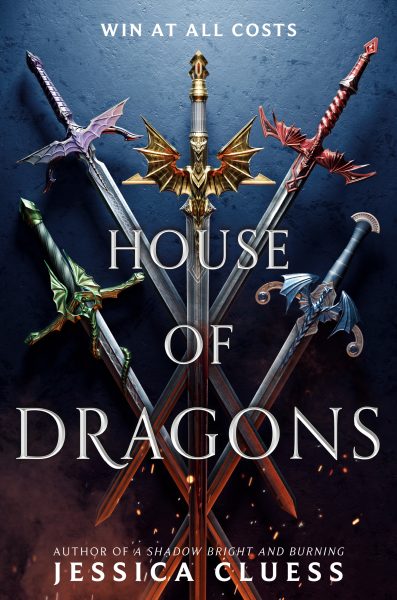