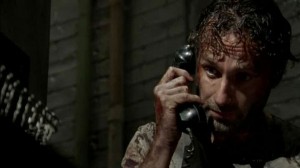 ‘Hounded’ begins with Merle (Rooker) and a group of henchmen tracking Michonne (Gurira) who has left them a message in zombie parts to ‘go back’. She ambushes them and kills two of the three henchmen. The third henchman and Merle track her after Merle grazes her leg with a bullet. Another fight ensues but Michonne escapes when a trio of zombies interrupt the fighting. Merle kills his henchman to protect the lie he will tell The Governor (Morrissey) about killing Michonne.

Michonne encounters a group of zombies while covered in the guts of the ones she fought with Merle. She realises, as Rick and Glenn did in season one, that the blood camouflages her from the walkers. Michonne heads into town and hides behind a car to watch Maggie (Cohan) and Glenn (Yeun) collecting baby supplies. Merle appears and asks Glenn to take him to his brother, Daryl (Reedus). Glenn refuses so Merle takes both him and Maggie to the town as hostages.

Rick (Lincoln) pleads for help from the female voice on the phone who says she and her group are somewhere safe. She says she will call back once discussing Rick’s request with her group. A male calls back and starts asking questions about Rick to ascertain if his group will be safe, including if Rick has killed anyone. When the male voice asks about Lori, Rick refuses to answer and the voice hangs up. A final phone call reveals that the callers have been the members of the group who have died — Jacqui, Amy, Jim, and finally Lori. The voice of Lori tells Rick he needs to look after Carl and their daughter.

Daryl finds Carol’s (McBride) knife in a zombie’s face. Carol has been presumed dead since T-Dog and Lori’s death. Daryl searches a nearby cell and finds her dehydrated, barely alive.

The episode ends with Michonne using her zombie camouflage to approach the prison with the supplies that Maggie and Glenn were forced to leave behind. She is met by a confused Rick.

And they are back! The twists; the turns; the inevitable coupling up of Andrea and the most terrible man in the show at this point. There are just so many characters whose motives are unclear and who are yet to reveal their hand.

I’m sure I’ve said this before, but I’m extremely glad I waited for DVD to get stuck into The Walking Dead. The cliffhangers really make the viewer hunger for the next episode.