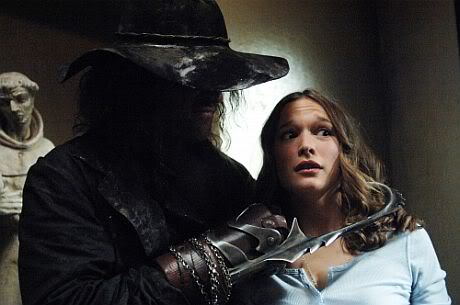 ‘Hook Man’, surprisingly, features a man with a hook for a hand.

CJ: Watching this, the acting has improved even just in this season.

A young couple, Lori and Rich, pull up beneath a bridge in an unpleasant spot to make out.

CJ: Why in the history of anything anywhere would you choose that as the place to stop?

CJ: Oh honestly, you have to start with the shoulders first, you don’t just go under.

Lori asks “What was that?”

CJ: A good reason to leave.

Instead of taking the sensible route and, y’know, DRIVING AWAY, Rich gets out of the car to investigate.

CJ: Lori locked the door and left the window down!

R: Why not get into the driver’s seat AND DRIVE?

CJ: Oh come on, girl, didn’t you hear any urban legends when you were in college?

N: Do you think she was smart enough to go to college?

Sam gets Dean interested in the investigation. They rock up to a mechanic’s garage.

CJ: Why is he eating a banana while working on a car? Speaking of phallic…

“The things he can do with a brush.” Dean pimping out Sam.

A door bangs during Rich’s funeral.

At Rich’s wake someone tells Lori, “You are allowed to have fun.”

Lori tells Sam her horrific ordeal was a trauma-induced hallucination. Except she doesn’t have quite that grasp of language so she keeps it simple.

The supposedly comforting response: “It doesn’t mean it wasn’t real.”

Investigating the Hook Man, a guy hanged for his crimes in the 19th century: “He killed 13 prostitutes…”

CJ: Why would anyone ever get their hand replaced with a hook? Especially one LIKE THAT?

Another view of the bridge under which Rich and Lori parked to make out.

R: It looks like the same bridge as in the pilot episode with the woman in white.

CJ: If you find a creepy location it makes sense to recycle it.

Hook Man creeps around town like the monster from under the bed in the Twilight Zone.

N: Why would you leave the door open for that?

R: He looks like V out of V for Vendetta with the black fedora and coat.

CJ: Aren’t you glad you didn’t turn on the lights is another urban legend.

*Odd glances from other Geek Girls*

CJ: What? I’ve seen the horror movie Urban Legend AND ITS TWO SEQUELS.

Dean searches among the headstones in a graveyard for an unmarked grave.

CJ: TBH counterproductive. Surely he’d know his way around a graveyard by now.

N: That headstone is marked.

CJ: So much for unmarked. It’s not even an unmarked mark.

Lori feels she’s at fault or, at least, bad luck.

Intelligent question of the week: “Why would you say that?”

CJ: Because the last 2 people she was close to DIED you idiot!

“Goodbye preacher.” Dean thinks he’s disposed of the Hook Man so, naturally, he jinxes himself and Sam. One glance at the clock tells us that this zode ain’t over yet, baby.

N: I’m waiting for something to go wrong. Surely — no.

Sam, in true love-interest-of-the-week style, gets hot and heavy with the woman at the center of the Hook Man death circle.

Hook Man is on the rampage but Lori says, “Dad, it’s ok.”

CJ: No. I think it’s pretty far from ok.

The brothers realize Hook Man’s hook wasn’t buried with him. It took another attack for them to realize this. Apparently they didn’t just look at the clock.

N: So they’re looking for something silver in a church. That’ll be easy. [snark]

Our non-caped crusaders and love-interest-of-the-week throw silver into an ordinary wood heater.

CJ: That would not be hot enough to melt silver.

N: I was waiting for someone else to say that.

First aid scene. More intimacy between Sam and the Angel of Death, aka Lori.

CJ: Why would they put a dressing on a wound that’s gushing so much?

CJ: Butterfly clips at the very least. SLOW THE BLEEDING.

The silver melted in the wood heater, taking the Hook Man with it into the liquefied afterlife.

Sam and Dean drive out of town.

N: But there’s no sunset.