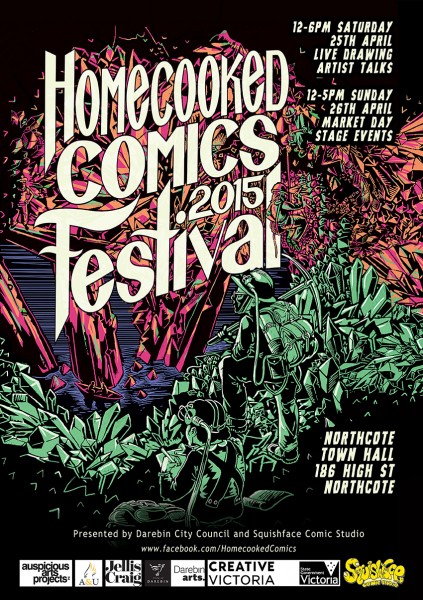 The Homecooked Comics Festival is here for 2015 and it’s growing! Darebin City Council and Squishface Studio team up once again to celebrate Australia’s independent comic book scene, with artists from interstate and New Zealand flying in to join the party. This year, thanks to support from Arts Victoria, the festival will be spread over three days of drawing workshops, talks and a local comics market.

The previous Homecooked Comics Festivals have been one-day events, but this year includes a full day of workshops on Saturday 25 April.

The rooftop room of Northcote Town Hall will host 4 very diverse artists from interstate and New Zealand. Paul Peart-Smith, Madeleine Rosca, Thomas Campi and Dylan Horrocks will be teaming up with Victorian comic artists in collaborative drawing workshops. It will be great opportunity for comic fans and drawing enthusiasts alike, with the added bonus of soup and waffles for all participants.

Pre-sale tickets for these workshops will be available through Homecooked Comics Festival’s Pozible campaign. Stay tuned to Homecooked’s Facebook page for more details.

The festival gave out 5 grants to emerging artists, including 2 that are under 15, to help them produce comics to sell. Keep an eye out for them on the day.

There will be free panels and drawing workshops presented by Victorian comic artists for those who want to get into the nitty gritty of comic creation. The usual high-energy stage antics and all ages drawing activities will be there for everyone to enjoy

An exhibition of comic artists and illustrators exploring the motifs and nuances of their everyday lives will be the opening night event for the 2015 festival. From 6pm onwards on 24 April, people can celebrate a new and exciting year for Homecooked Comics Festival at the Snug Space in Northcote.