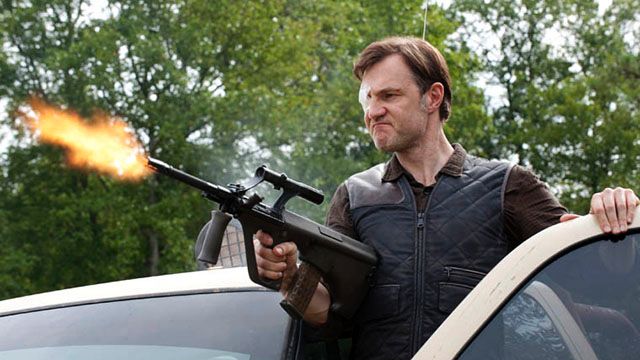 ‘Home’ begins with Rick (Lincoln) keeping watch over the prison grounds. He sees his dead wife walking towards her grave and runs to see her. When he arrives she has disappeared but he sees her outside the prison gates. He follows her. Michonne (Gurira) witnesses Rick from a distance as he caresses the air, where only he can see his dead wife’s form.

The Governor (Morrissey), having seen Andrea’s (Holden) rousing speech, goes to make amends with her. He tells her that no retaliation will be taken against Rick’s group at the prison. Andrea asks to go see the prison, but the Governor tells her she’s should not — her place is in town.

Unsurprisingly, the Governor was lying to Andrea about not retaliating and asks Milton (Roberts) to keep tabs on her.

Merle (Rooker) and Daryl (Reedus) come across a family under attack. Daryl runs to help them while Merle scoffs. Once the zombies have been killed and the family is safe, Merle tries to steal their supplies. Daryl holds his crossbow against his brother’s head and tells him to leave the family alone.

Once the family has escaped from the zombies and Merle, Daryl confronts Merle about the way he acted to get handcuffed to the roof in season one. The brothers fight and Merle rips Daryl’s shirt, revealing old scars. Merle claims to not have known Daryl was being abused by their father. It’s Daryl’s turn to scoff, claiming that Merle knew full well what was happening because it happened to him too. Daryl turns and heads back home — the prison — leaving Merle to decide if he stays or follows.

Hershel (Wilson) walks to the prison fence to remind Rick of his responsibility to the group. Carol (McBride) stands watch in the prison yard while Axle (Temple) tries to sweet-talk her. Carl (Riggs) joins Carol and Axle in the prison yard.

Axle is shot in the head by the Governor.

While the group are separated and under fire from the Governor and his men, a large van crashes through the prison gates. The back of the van opens to loose a horde of zombies within the prison grounds.

The episode ends with Daryl and Merle arriving just in time to save Rick from being zombie chow and help protect the prison’s residents.

Holy cow, the Governor does NOT mess around. This guy has a few too many screws loose but somehow manages to maintain a high level of manipulation on those around him. A great villain for Rick who, while not being the full apple cart lately, fundamentally tries to do everything for the good of his group. Perhaps if we had followed the Governor from day one, as we have Rick, there would be more empathy, but as it stands he is a grade-A villain.

Glad that Daryl is back in the fold and that Merle has begun to show some good-guy tendencies. He’s nowhere near redeemed but he seems to have genuine loyalty toward his brother and that’s a good start.

Great episode with real WTF moments when Axel is killed and the van load of zombies are released.

‘You know, I may be the one walking away, but you’re the one who’s leaving. Again.’