Saturday 28 January at Batman’s Park (Queue Batman theme music) was the site of a casual yet enjoyable comics festival. We decided to go a little late as our car doesn’t have air conditioning, so it was a long, hot drive in the slightly cooler mid-afternoon instead of the stinking hot early afternoon. When we arrived, we cruised around quickly then found drinks and sat in the shade to recover from the car trip. A stage was set up, with a band playing, creating a pleasant atmosphere for people to relax. Stalls sold food and drink in addition to publishers and retailers selling comics. A workshop nestled within a grove of trees helped people develop comic book characters while another workshop taught people how to move and fight, presumably to help them draw action better.

It’s amazing who you run into at festivals like this; Richard Morden made a bee-line for us, sitting down to say hello. I was startled by this complete stranger bowling up to say hello until he spoke. Having shaved off his beard and concealed his normal glasses in his backpack, Richard was completely unrecognisable, but his voice is very distinctive. Richard is a published author and illustrator who received honours for a prestigious children’s book award a few years back; he’s thinking about exploring epublishing, so we chatted about the success of Rachel Yu. (here are articles about her comic and her success: Comics beat and Geek News.)

After we chatted for a while and stood up to do the rounds, who else should wander over but Tom Taylor, Melbourne’s own Star Wars comics author. Tom had Connor, his very cute son, with him. Apparently Connor made Tom go down the slide. Sure, Tom, sure… it wasn’t the big kid in you at all, was it Tom? Connor had a good time and, like all toddlers, needed to go home before he was exhausted, so the four of us parted ways.

Edward and I intended to walk around the stalls properly at this stage, but a comic book quiz starring some local comic makers, sponsored and judged by Allen & Unwin Publishers, started up, so our walk was more a short stagger before collapsing on the grass again. Official quiz contestants were Michael Camillieri, Sarah Howell and Bruce Mutard. The MC was Bernard Caleo, co-hostess and prize-giver was Elise Jones. The scorekeeper was Mandy Ord. There were piles of books on the table in front of the contestants; I’m not sure how the contest really worked except it seemed some questions were only for the official contestants and some were for the crowd. I think the winner of the official contestants was supposed to win the books left at the end, but I’m pretty sure Bernard said they’d be donated to the Squishface library after Sarah declined the huge pile. 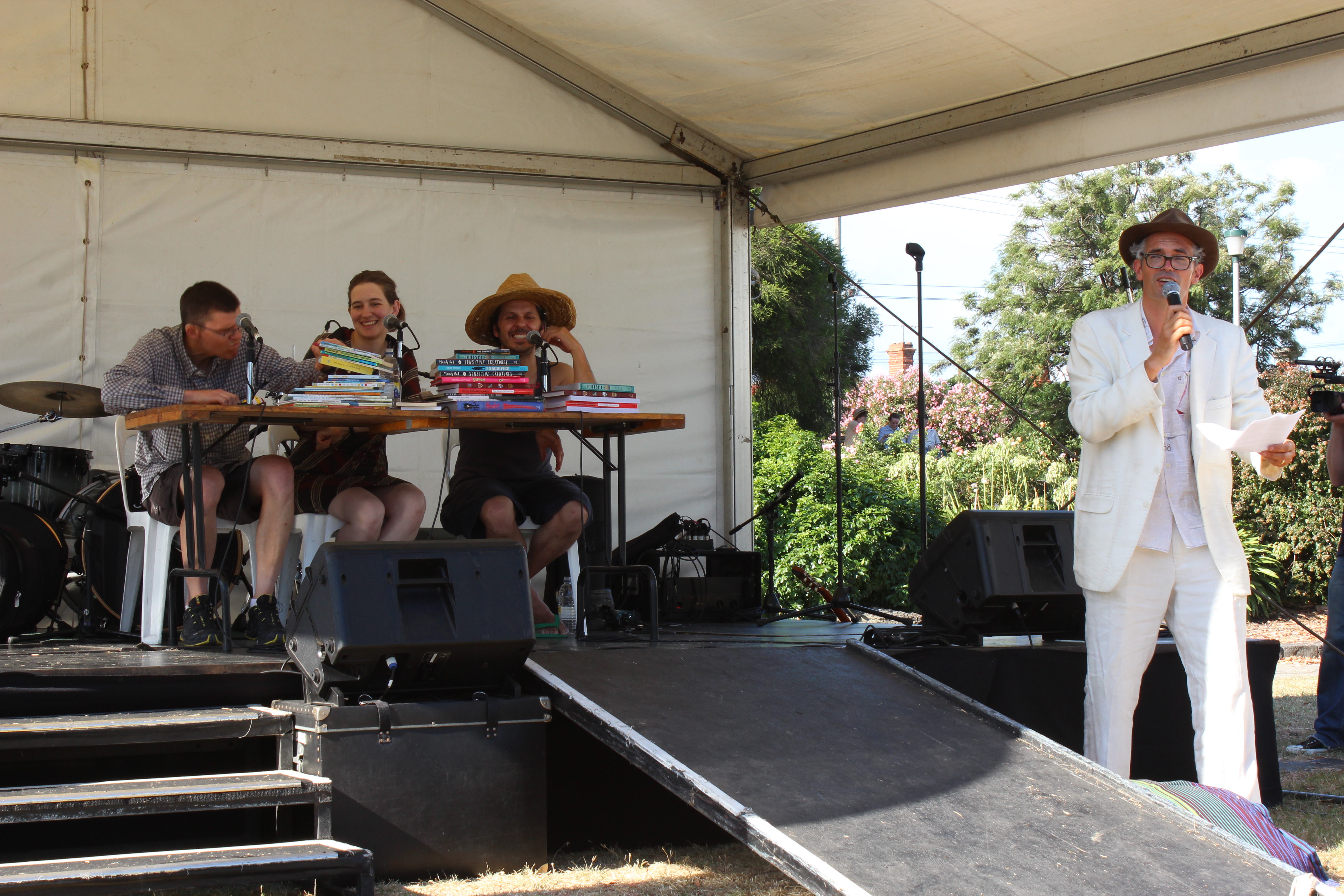 It was interesting to hear the questions, most of which I didn’t have a clue about. I thought the question to which ‘Neil Gaiman’ was the answer would have been answered more quickly. I guess those present weren’t trivia buffs. I knew the answer to a couple of questions but I was too self-conscious to answer until the quizmaster asked someone to sing the theme to Felix the Cat and I started a duet with another woman. I completely lost the plot, words, tune and all, when a microphone was shoved in my face. Not my proudest moment. Funnily enough, I’m comfortable with public speaking, as anyone who attended THAT Continuum 7 panel can attest; I’m just lousy when it comes to public singing. After much prompting I won a copy of Nicki Greenbergh’s The Great Gatsby, which is, of course, a comic book.

A number of prizes were claimed by primary-school aged boys: clearly through their knowledge of the comic book scene and reading of the books, not through bias of the quizmaster. I’m guessing that at least one of these knowledgeable youngsters was the son of the quizmaster because he was somewhat embarrassed, but with no-one else clamouring to answer the questions it was fair play to the kids. 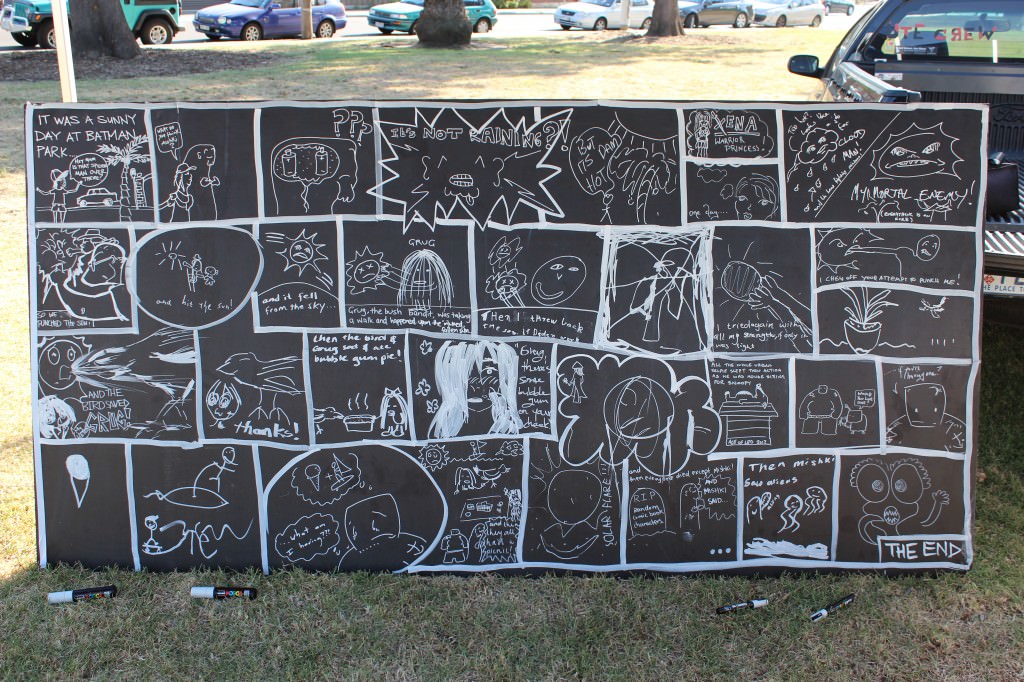 Next up on the stage was another band, so Edward and I continued perusing the stalls in more detail. There was a comic drawn on a blackboard; the varying styles made it look as though festival attendees were invited to contribute a panel until it was full. Slow Glass Books was there, selling a range of comic books in either trade or graphic novel form, most of which I’d never seen before. Bruce Mutard joined Justin at the Slow Glass stand to autograph his comic books that were prominently displayed… which reminded me, I have some of Bruce’s work and I haven’t asked him to autograph it yet. Slack.

We purchased a barbequed sausage with onion each from the stall raising money to send the queer roller derby team somewhere – good luck, where ever it is that you’re going – and sat down again to enjoy.

There were a small number of people who wore costumes. Instead of a straight parade, they danced around the park.

The Home Cooked Comics Festival was a small but enjoyable event. I suspect the heat kept a lot of people away, but by the time we arrived (around 5 pm) the heat in the park was not unpleasant, particularly in the shade. It was just the drive in the car that was unbearable. It appears that the City of Darebin – a council area within the greater metropolis of Melbourne – supported this festival as did Allen & Unwin, publishers. Well done, I say, congratulations to all for organising an enjoyable event and promoting the local comics scene. If this festival continues as an annual event, I am sure it will grow; I just hope it keeps that laid-back family-friendly atmosphere. 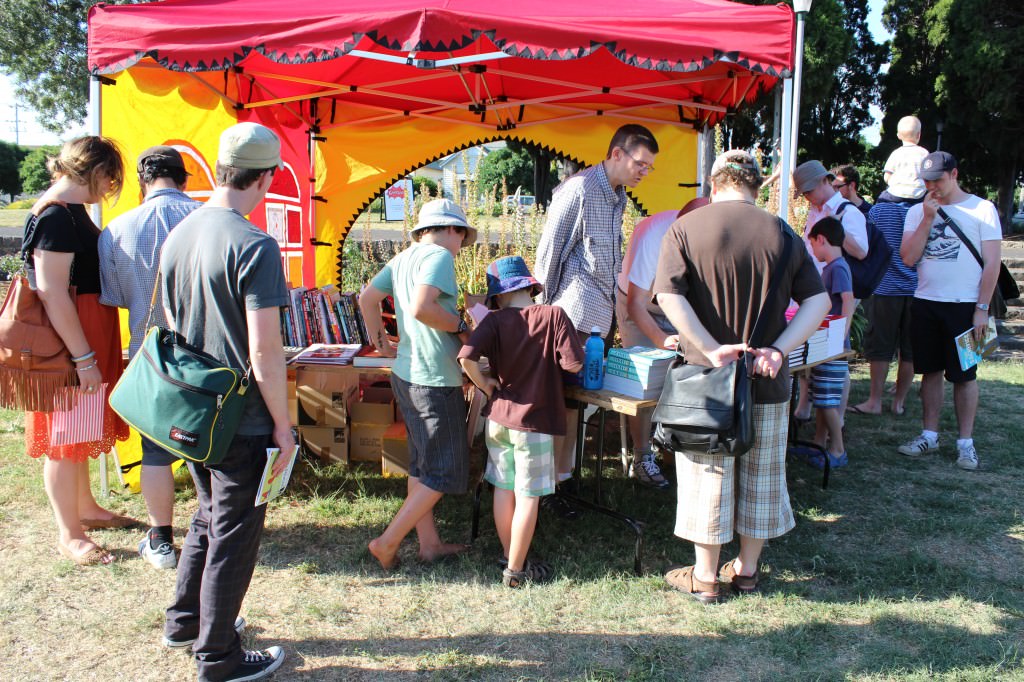