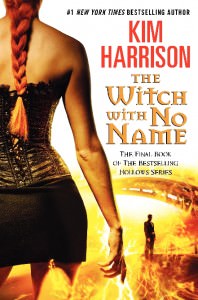 THE WITCH WITH NO NAME by Kim Harrison

The Witch with No Name is the triumphant conclusion to Kim Harrison’s #1 New York Times bestselling Hollows series!

Rachel Morgan’s come a long way from the clutzy runner of Dead Witch Walking. She’s faced vampires and werewolves, banshees, witchs, and soul-eating demons. She’s crossed worlds, channeled gods and accepted her place as a day-walking demon. She’s lost friends and lovers and family, and an old enemy has become something much more.

But power demands responsibility, and world-changers must always pay a price. That time is now.

To save Ivy’s soul and the rest of the living vampires, to keep the demonic ever after and our own world from destruction, Rachel Morgan will risk everything.

New York Times bestselling author Kim Harrison was born and raised in the upper Midwest. Her bestselling Hollows novels include Dead Witch Walking, The Good, The Bad, and The Undead, Every Which Way But Dead, A Fistful of Charms, For a Few Demons More, The Outlaw Demon Wails, White Witch, Black Curse, Black Magic Sanction, Pale Demon, A Perfect Blood, Ever After, The Undead Pool, plus the short story collection Into the Woods and The Hollows Insider. She also writes the bestselling Madison Avery YA series.