Morrigan Crow turns thirteen and still shows more maturity than many adults in her quest to study Wunder, the source of magic in Nevermoor. Battling superstition, politics and now a new twist: speciesism, aka racism. A new threat, a pandemic called Hollowpox, sweeps through the Wunimal community, anthropomorphic animals, sending them rabid then leaving them in a coma. Oh, and Morrigan’s nemesis, the evil Wundersmith Ezra Squall, is still badgering her to become his apprentice. Only this time he offers her a cure for the Hollowpox, but is he telling the truth?

One of the first lessons of the school year for Unit 919, aka Morrigan’s class, is Concealment and Distraction. They watch a film of their induction into WunSoc, the Wunder Society, only it’s not the induction they remember. All except Lam, the oracle, saw and heard wonders while other society members concealed horrors and distracted the unit from dangers.

Throughout the school year, the society and media work together to conceal and distract ordinary citizens from perils, leaving them largely ignorant. Antics and assignments are highly entertaining but the message – don’t be distracted, look for the tricks and truth – is resoundingly clear. Hot on the heels of Wundersmith where Morrigan learns to question “facts” taught by professors and expounded upon in books, Hollowpox is the most seditious of stories. Seditious in an era where governments discourage critical analysis and quash education in favor of bread and circuses.

Hollowpox is a pandemic, making me wonder exactly when this book was written. Usually books take a couple of years, or at least several months, to go from completed author’s draft to publication in a large publishing house like Hachette Australia, but this book reads like it could have been written within the last 6 months. Hollowpox even has lockdown, isolation, quarantine, a curfew, arrests for violating the curfew and – get this! – big business and the chamber of commerce refuse to shut down the bazaar because of the economy boost. Profit before people.

Morrigan interacting with all of the above in a fast-paced story aiming to be entertaining is an excellent way to help children process the unprecedented events of 2020. I just wish Townsend could have worked masks in as a preventative into her narrative. Perhaps this omission is key to determining when she wrote the book?

Wunimals are anthropomorphic animals. A Wunimal Major is an animal that, to all intents and purposes, looks like and animal but has a human-like personality. A Wunimal Minor is a humanoid with animal characteristics. Both suffer a Nigel Farage-type character campaigning to get them out of Nevermoor, even inciting violence in rallies that become increasingly reminiscent of Trump’s.

Over a period of time, this reprehensible excuse for a human whips up fear and frenzy, inciting violence against these animals. And then, of course, when a Wunimal reacts with fear or anger, they claim the Wunimal has the Hollowpox so is a threat to humans. Sound familiar?

There are even cages but, thankfully, this is a children’s story. Only Wunimals reduced to behaving like their animal counterparts – like a jaguar – end up in cages, and only while they’re dangerous. But some of the discussion is excellent and relevant to today’s politics. Parents and teachers can, where appropriate, use Hollowpox to launch into discussions about human rights and refugees. For children who are too young, the story unfolds in such a way as to not be as confronting as reality.

In my review of Wundersmith, I noted an offensive ableist (anti-disabled) trope. A child lost his magical ability so disappeared from the narrative, leaving only people talking about him as if he was dead. There was no discussion of acceptance, no attempt to include him in their community. People, including Morrigan, were horrified. Quite like people in the real world are when someone acquires a disability.

In Hollowpox, Townsend raises the stakes. When Wunimals are stripped of their wunder, reducing them to, in effect, disabled people, people are horrified. Some will argue this is reasonable. It is certainly a “normal” reaction. However, Jupiter – one of the best people in these stories – specifically says he’d rather be dead than hollow. Morrigan carries that with her uncritically. So many people in the real world say they’d rather be dead than disabled.

In 2016 I attended a Science In The Pub presentation where the Australian winner of a university challenge specifically said he’d rather be dead than blind. This was his justification, apparently, for studying a disease of the retina. I was there with my white cane, VIDEO RECORDING HIS SPEECH, contributing like a useful member of society, and HE TELLS ME HE’D KILL HIMSELF IF HE WENT BLIND. Later I walked past him on my way to the toilets and carefully refrained from beating the shit out of him with my cane.

To say much more about this trope would be to reveal late-story spoilers so I’ll stop here. Suffice it to say, this plot-line does not improve. It’s a great read but very eugenics-oriented and offensive to the disabled community. So disappointing.

Hollowpox and all the Nevermoor series are what Harry Potter coulda-shoulda-woulda been with less bigotry. The Nevermoor series reads like the Harry Potter movies, which is to say: better than the books, especially by the time you get to Goblet of Fire. With the current climate – which includes J K Rowling dabbling in race and gender wars to everyone’s detriment – Townsend’s books are a refreshing antidote and a kick-ass read for people of all ages.

The story, plot and representation of every other minority – women, race and gender – is brilliant, teaching the next generation to be more inclusive.

Townsend’s ableism is reinforcing entrenched ideas that create barriers for disabled people and increase the trauma for those who acquire disability. For ableism and ableism alone, I’m deducting one star and only giving Hollowpox 4 out of 5 stars. 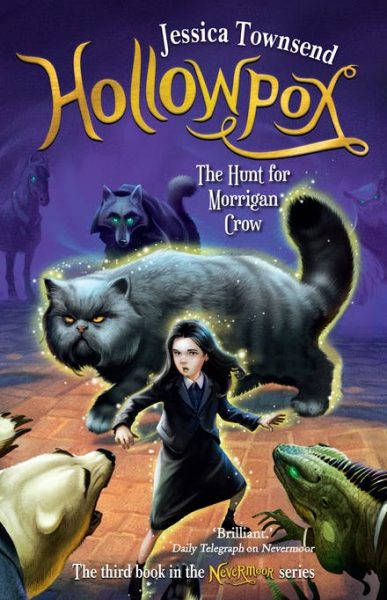