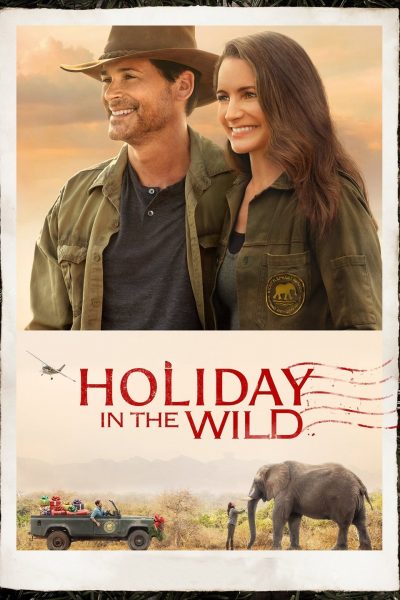 Kate’s (Kristin Davis) son leaves for college then, as he walks out the door after this momentous event, her dick of a husband tells her their marriage is over. He’d been planning to break up with her but didn’t want to upset their son by doing it before he left for college. Kate had booked them a holiday in the wild of Africa as a post-empty-nest second honeymoon so she goes alone.

Creepy guy in the bar, Derek (Rob Lowe), hits on Kate. She walks out. Only to find he’s her pilot the next day. On the flight to the 5-star lodge, Derek lands to rescue a baby elephant. Poachers killed its mother. Kate refuses to get back on the plane after staff from a sanctuary collect the baby elephant.

What follows is part romance and part documentary about the lives of elephants and those who care for them. Holiday in the Wild is slower-paced than many movies, and slower than I usually enjoy, but the elephants, the scenery and the way of life in an elephant nursery are all characters in the story.

Holiday in the Wild is written by Neal and Tippi Dobrovsky, who have collaborated on lots of telemovies and series, often with a romantic focus (based on a quick scan of their IMDB profiles). This is more of a romance with elephants and a way of life than a romance between two people, although the human romance is definitely part of the story, all the way through.

My biggest niggle with this movie is that Kate spends some serious time in Africa AND NOT ONCE DOES SHE WEAR A HAT. Derek, aka the gorgeous Rob Lowe, wears hats nearly all the time. I can’t help but wonder if Mr Sexy (who has aged quite well) is having problems in the hair department or if the director just thinks women should age (due to sun damage and skin cancer) instead of age well.

What other people are saying…

Yes, Christmas is still some way off, but it might be good for you to get ahead of this one. Every year, Netflix stakes a claim to out-Hallmark Hallmark when it comes to producing syrupy, formulaic, B-grade festive movies…

He says a lot more, which makes me wonder if he objects more to the factoid or the romantic side of Holiday in the Wild despite telling us to ‘watch eet’. I’m giving it 4 stars with the note that it’s not your usual rom-com fare, it features more animals than your usual rom-com and the movie is a call to action to protect endangered elephants AND DON’T EVER BUY IVORY.