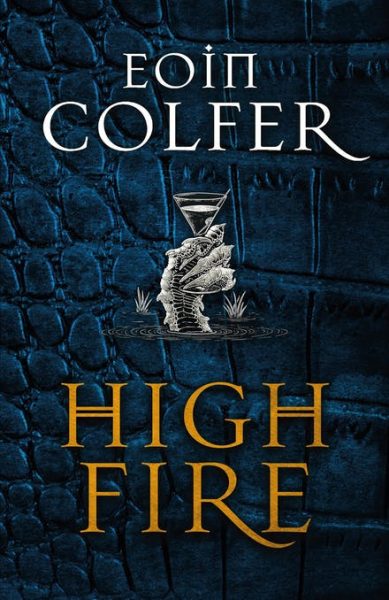 Lord High Fire has fallen from the pinnacle of the foodchain to become a loner hanging out with alligators in a swamp near New Orleans. Those pesky humans: they start as familiars only to become torch-wielding mobs. And now they have missiles! High Fire has taken the name “Vern”, short for Wyvern, to fly under the radar (pardon the pun).

Squib is a teenager who’s forever in trouble, especially now the local constable, Regence Hooke, has the hots for his mother, Elodie. Squib gets a job working for the local moonshine runner but that lasts five minutes and lands him in a world of trouble.

Regence Hooke has aspirations. He’s using his lawman position to climb the criminal underworld ladder. And he’s not averse to killing people. Although he thinks killing Squib might put Elodie off.

High Fire is a cross between an adult’s detective story with hints of noir, a coming-of-age novel, and a dragon story with splodeys because in every unknown region ‘there be dragons’.

Cajun is as Cajun does

The book blurb, Squib’s introduction, the narrative and some of the characters focus repeatedly on Squib’s Cajun ethnicity. Squib is half-Irish on his father’s side but Colfer rarely mentions this. The emphasis on Squib’s Cajun-ness is so obsessive that I felt uncomfortable. It’s a bit like a celebrity coming out of the closet in 2020 to accolades of “he’s so brave – and so gay – and he’s a nice man – and so gay”. Surely being gay or Cajun or any form of not-‘traditional’ or not-white should be more a given than a point of repeated emphasis?

Colfer also mentions Squib’s Cajun skin as if it’s a magical barrier protecting him from mosquito bites and other harmful effects. I’m not convinced that a particular type of skin has that effect. Sickle cell anemia protects some ethnic groups from malaria but has other effects including increasing infant mortality rates. Overall, Colfer’s emphasis on Squib’s Cajun-ness seemed like “look! Minority representation!”

For any more comment, we need an #OwnVoices critic.

Regence Hooke enlists some mercenaries’ help. Colfer brings in women, presumably because he realised that, so far, Squib’s mother represents 51% of the community virtually alone. Suffice to say, this novel fails the Bechdel Test. However, the women mercenaries hold their own until they don’t. To be honest, I would have liked them to appear much earlier, for Colfer to unpack their stories and deconstruct their tropes more fully.

Colfer introduces Jing Jiang, which appears to be a Singaporean name based on the first Google result. She’s stereotypically small at 4 feet 11 inches although Asians’ average height has increased considerably with their increasingly nutritious diets supporting childhood growth. Still, not everyone is tall. However, I would have thought that being under 5 feet would have prevented her joining the army to earn her title of “Gunnery Sergeant”.

They said crazy things about Jing Jiang: her old man was a ninja, her weapon’s barrel was forged from the samurai sword of her ancestors, all sorts of stereotypical shit like that (p. 299).

Colfer’s introduction to Jing Jiang blends both stereotypes and the deconstruction of stereotypes. The question is: where is the line between reinforcing tropes by repetition and deconstructing tropes?

Jing Jiang herself reinforces racist tropes by saying “You think you’re some kind of samurai warlord?” (p. 301), once again playing into dominant white tropes about Asians.

Hooke was pretty sure that “Gojira” was a Japanese reference and Jiang was Chinese, but they could discuss that cross-cultural reference later and either way the latest reboot was one hell of a movie (p. 325).

This reference went straight over my head so I flagged it for later. Google says Gojira is a French heavy metal band that changed its name after originally forming under the name Godzilla.

Gojira is actually the combination of two Japanese words: gorira, which means gorilla and kujira which means whale. So when people are screaming their heads off about Godzilla (as they do in many of these movies), they’re actually saying a Japanese portmanteau of gorilla-whale (Vox https://www.vox.com/2014/5/12/5707934/the-amateurs-guide-to-godzilla)

Calling a dragon “Godzilla” seems legit. If an Irish author understands the reference, surely it’s racist to imply that a non-white character needs to identify as a specific race to use the reference? It also seems odd that Jing Jiang remains “Asian American, heritage unknown” while her ancestry is repeatedly cause for comment. I’m interested in hearing what #OwnVoices reviewers and critics have to say about this representation.

Squib lost a finger in a gunpowder accident when he was 12. I’m not sure this counts as a disability: I   think it’s more of an impairment. I knew someone who’d lost his thumb as a kid and that was a disability! One of humanity’s claims to ‘superiority’ is our opposable thumbs. Apart from Squib’s absent finger, I don’t think any character of significance is disabled. Except Ivory Conti.

Eoin Colfer is milking all the tropes for all they’re worth in this story. Including a character called “Ivory” who either has albinism or is an albino-type.

Before we are properly introduced to Ivory, we meet Waxman, a half-dragon half-human, who says “I’m like Boo fuckin’ Radley on crack”. Boo Radley was the creepy simple character with albinism in To Kill A Mockingbird. I have SO MANY issues with Boo Radley and any link to him. If you’re interested, you can read a (shortish incomplete) rant about this trope in my review of Alabaster. (Actually, I can’t find my review of Alabaster, WTF? I’ll look for it and link back later. There’s a longer dissection on this post.) At least Waxman doesn’t overtly have albinism; I think the link here is just that people think he’s creepy.

Ivory Contin is established early on as a villain in the local Mafia, which Colfer expands to explicitly identify as Sicilian (from memory). Anthony Contin renamed himself Ivory Contin; this is like a person with albinism renaming themselves Casper, Ghost or Whitey. Apparently this was to ‘defang’ any ribbing (p. 237).

Colfer describes him as “the little white count on account of his super-pale skin”.

First Colfer emphasizes Squib’s Cajun-ness then he labors Ivory’s albinism: “Hooke thought… he looked corresponding so perfectly with his name – viz. White Count…” (p. 270). Luckily Ivory is a relatively minor character so he looms on the horizon like a squall until we meet him in the last act.

Despite introducing a few women late in the story, High Fire doesn’t pass the Bechdel Test. Furthermore, for most of the book Elodie is both Sainted Mother and Object of Desire without much of a personality.

From the time we meet him until the end of the story, Regence Hooke has three things on his mind: fucking women, fucking up women, and fucking over Ivory Contin. The first two are so awful and so prevalent, especially when in Hooke’s point of view, that I suspect I didn’t notice intended humor. I was too squicked out and horrified by Hooke’s intent to violate Elodie and other women to be amused. Hooke oppressed women in the story and me as reader.

Colfer repeatedly uses the term “hillbillies”, which I think is intended to evoke Beverly Hillbillies type humorous reaction. However, even when I was a kid I cringed at the class-based “humor” of that show, rarely finding it funny in the few episodes I endured. In contrast, Charlaine Harris’s use of trailer-park characters and “hillbillies” as protagonists was a strength of her series. Colfer incorporates this type to some extent with Squib and Elodie despite using the term repeatedly.

I am a huge fan of Colfer’s Artemis Fowl series as evidenced in this podcast interview. Plus I enjoyed Plugged, another adult book by Colfer. High Fire indulges in Colfer’s usual brand of humor – that I love – during action scenes and splodeys. However, it loses buoyancy because of the villain’s obsession with fucking and fucking over women. Otherwise, it’s a comedic action with noir tones alongside problematic tropes. I predict readers will be divided about High Fire: some will ADORE this novel while others will despise it.