I am most miffed.  My servant left me at home alone.  Regardless of the fact that I was curled up peacefully, I object to my servant taking liberties in this way.  She came home with bags of parcels, only to open them then sit down at her computer and hammer away with trivialities, IGNORING ME.  I jumped down from my throne, walked in to the kitchen to eat some biscuits, and came back out only to find SHE WAS STILL IGNORING ME.  I lay down on the floor nearby waiting for my due: her full attention.  Instead of fawning over me and petting me, she surrounded me with books.  I would not tolerate such impertinence, which I made clear.  Several failed photos later, I sensed my servant was about to give up and otherwise occupy herself, so I most graciously allowed this photo to be taken.  Then, miffed, I hid. 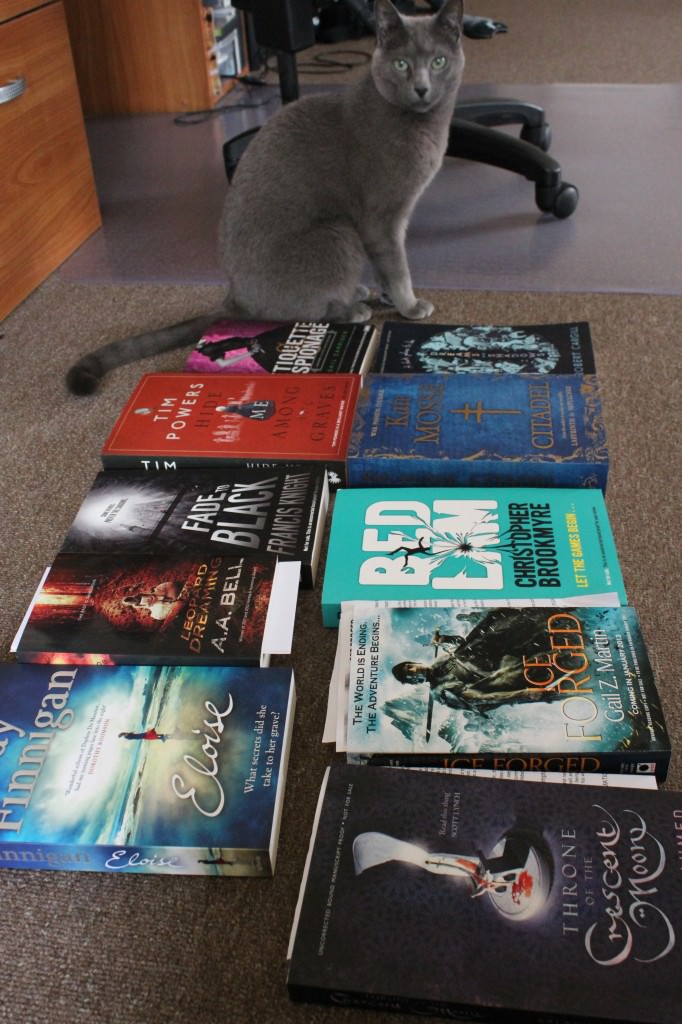 Eloise is Judy Finnigan‘s debut novel, with pictures of WAVES.  As I object to getting my dainty paws wet, the cover does not appeal to me AT ALL. [sniff]  The quote on the cover says  ‘”Wonderful echoes of Daphne du Maurier… had me turning pages late into the night” – Dorothy Koomson.’  ‘Maurier’ sounds a little cat-like so I might just be persuaded…

Leopard dreaming is the third in a trilogy by award-winning author AA Bell.  I know my servant desperately wants to read these books, she began reading the first one but is now waiting for her new magnifier.  Ironic, much?  We cats [licks self] are renown for our excellent eyesight…

Fade to Black by Francis Knight is another debut fantasy novel.  Orbit says this about Fade to Black:

We’d like to welcome you all to the fantasy world of Mahala. It’s a towering city that rises up from the deep, dark depths of a valley.

Mahala is built up in layers, not across – with streets piled upon streets, and buildings balancing precariously upon buildings. It’s a city that the Ministry rules from its lofty perch at the sunlit summit, and where the forsaken lurk in the shadowy depths of the Pit.

This compelling tale follows the story of Rojan Dizon – a bounty hunter who’s grown up in the shadows of Mahala. Everyone knows he’s a rogue, a womaniser, a shirker of all responsibility. But what they don’t know is that he’s also a pain-mage: someone able to draw magic from his own and other people’s pain. Rojan’s not keen on using his abilities, but when his niece is abducted and taken to the dark depths of the Pit, he’ll be forced to unleash his powers to find her.

I don’t object to inflicting a little pain myself [extends claws] as can be seen on my servant’s flesh.  I jumped casually off her lap last week, digging my hind claw in – just the one – to show that I was not amused.  The wound is still healing.  Do you think Rojan would appreciate my skills?

Hide me among the graves is a novel by the multiple-award-winning Tim Powers.  It’s a secret history of London, with two vampires fighting over something inconsequential like the survival of the humans or something.  I swear my servant was drooling over this book, especially after reading this review by Cory Doctorow.

Etiquette and Espionage cover from Goodreads, might not be the final published cover

Etiquette and Espionage by Gail Carriger is the first in her new series, set in the same world as the Parasol Protectorate series but with new characters.  I remember the Parasol Protectorate series -_-  The first book my servant read was actually number four in the series.  The servant laughed so much in the first chapter that I was disturbed: in order to nap, I felt the need to move to more stable furnishings!  After that, the servant read the whole series, binging on this steampunk adventure romance series.  I won’t allow her to read this series if she laughs too much.  >:|

Throne of the Crescent Moon is by Saladin Ahmed.  The publisher says this about Ahmed: Saladin Ahmed was born in Detroit and raised in a working-class, Arab American enclave in Michigan. His short stories have been nominated for the Nebula and Campbell awards, and have appeared in Year’s Best Fantasy and numerous other magazines, anthologies, and podcasts, as well as being translated into five foreign languages. THRONE OF THE CRESCENT MOON is his first novel. Saladin lives near Detroit with his wife and twin children.

Throne of the Crescent Moon is apparently a traditional swords & sorcery fantasy with an authentic middle-eastern spin.  The servant enjoys Middle-Eastern flavoured novels, so it’ll be interesting to see her reaction to this one.  IF SHE MOVES, I WILL EMBED MY CLAWS IN HER LEG.  AGAIN.

Ice Forged is not a debut novel – just for a change – it’s a novel by Gail Z. Martin, an author with an average of 4 stars on both Amazon and Goodreads.  It looks pretty cold to me, I don’t like the look of this cover at all.  Ice forged?  Give me ducted heating any day.

Bedlam by Christopher Brookmyre is a comedic take on being trapped inside a game.  The publisher says, ‘This is white-knuckle action, sprawling adventure, merciless satire and outrageous humour like you’ve never experienced. This is Bedlam.’  I prefer the sedate and dignified myself.

Citadel by Kate Mosse.  The servant says she read Labyrinth by Mosse back in the day before I was born.  I refuse to believe there was ever a time that I was not the centre of the universe [sniff], but the servant says Labyrinth was like the Da Vinci Code only much better, written from a feminist perspective with superior prose.  But then Mosse is, like myself, a female, so she’d have to have an element of superiority… even though she only has two legs and not four. 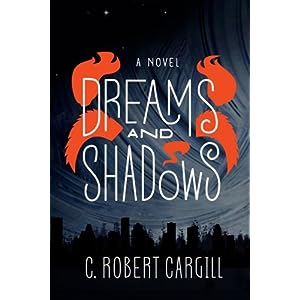 Dreams and Shadows by C. Robert Cargill.  This book was sent so far in advance that it’s hard to find references on the webz, including the right cover.  Amazon says, ‘“Exceptional worldbuilding, sure-handed plotting and well-rounded characters, even the nasty ones, abound, and the whole impressive enterprise moves smartly along through a fairy culture with a structure and motivations sharply different from that of humans. A mesmerizing and highly original debut.” (Kirkus Reviews)‘

The thought of night prowling and faery arouses my feral instincts….