Spoiler warning – to skip what could be a spoiler, go from the first section right to The Verdict.

In the very beginning, some girls are about to swear oaths to join Her Majesty’s Royal Coven. 25 years later, they mostly survived a war. Their friendships have suffered due to conflicts, careers and divided loyalties. But they’re still in touch, they’re still trying to be a community. Then shit happens.

And oh what glorious shit – as long as you’re reading this and not, y’know, EXPERIENCING it.

Niamh is a vet – both a veteran of war and a veterinarian – living in a village that has a long tradition of association with witches. These days there are a lot of lesbians and witches around town, with a reasonable amount of overlap between the two groups. Niamh has a healing gift, which shaped her character. In the chapter where we meet her, we learn that, like Granny Weatherwax, there are times when she eases a passing instead of healing. It’s a tough job but death is part of life. And there are times when we just have to let go.

Helena is the head of the Royal Coven. As such, she calls Niamh in to help deal with a teenage warlock who is out of control.

Gradually we meet all the original 5 girls who were about to take their oaths. Their paths diverged over time. Some also have kids who are now teenagers themselves. As such, Her Majesty’s Royal Coven could be considered YA (Young Adult) but the middle-aged women are a greater focus. However, this is one of those truly cross-generational novels with teens and their mums all having agency and significance in the plot.

Promises kept and promises broken – starting on the spoilers so YOU HAVE BEEN WARNED.

Upon meeting this strange and very powerful warlock, Niamh glimpses part of what went wrong for this traumatized teenager. She asks to take the child under her wing, to see what she can do to help. Gradually this unfolds into a diverging burgeoning community effort. Some make promises that they don’t keep. Sometimes promises kept would have been more harmful but at other times promises or understandings broken become more harmful. It’s complicated, which is the spice of storytelling.

Leonie, one of the original five girls, is now the head of a new coven, Diaspora. Although she considers her vows to the original Coven kept, others – like Helena – disagree. But Leonie felt strongly that Her Majesty’s Royal Coven prioritizes white witches and white witch magic, to the point where Black witch magic is demonized. Leonie is trying to build bridges, look after the dispossessed and, generally, be ethical while looking after those sidelined by the Royal Coven. Gotta love that!

Early on Leonie talks about her difficulty with coming to terms with pronouns that aren’t, shall we say, the ones we were taught in school. On the one hand, it’s a personal struggle to remember and a little bit difficult. On the other hand, Leonie genuinely loves and cares for these people who use those challenging pronouns. Leonie’s journey reflects many people’s journey these days. I felt SEEN.

Unless you’ve been off social media or had certain names and hashtags blocked, you probably know J K Rowling recently released another book. One where she writes a Mary Sue (aka TERF BIGOT) who is murdered by a left-wing “snowflake” in retaliation for vilifying vulnerable minorities. Rowling’s book is called The Ink Black Heart, an appropriate title but probably not for the reasons Rowling believes. Dawson’s book is the perfect foil for Rowling’s, and released at about the same time.

Helena is the Rowling-type TERF. Determined to keep all men and trans women out of her coven, she is prepared to kill if necessary. And collateral damage – collateral DEATHS – are FINE.

Although Helena is a life-long friend and member of the original group of five, good women fight, determined to lay down their lives if necessary, to defend the trans woman.

A teeny bit of a rant – still spoilery

I like to think I’d be one of those good women if necessary. However, Her Majesty’s Royal Coven inspired the realization that, of all the different Queer groups and labels, I identify most with the trans character. Not because I’m trans but because I believe trans people are the most vilified and hated of the Queer community. Nearly as much so as disabled people.

Before you pile on, remember that more people pile hatred and vilification onto disabled people because they see us as A FINANCIAL DRAIN ON GOVERNMENTS, A WASTE OF TAXPAYERS’ MONEY. As long as trans people aren’t receiving government allowances or subsidies, they’re not quite as hated as we are.

Furthermore, disabled people have historically been labelled as “useless eaters”, before during and since Nazis came for us and killed disabled Germans in their hundreds of thousands. Last weekend David Speers, a Liberal-Party-identifying former Sky News “journalist” on the Murdoch-minion-run ABC (Australia’s national “independent” broadcasting network) thought it’d be a great idea to “put [disabled people] to work”. As if we’re not currently slave labor with a basic pay rate of about 1/9th that of nondisabled people. Alternatively, barriers to paid employment and even education are so entrenched as to exile us to the wilderness. A University of Canberra professor assaulted me for talking on the phone in the refectory while disabled, then UC expelled me for complaining while disabled. And tried to jail me. In contrast only my mother and ex-husband tried to kill me so there’s that, but assaults are really common.

So I absolutely love the way people surround that trans woman to protect her and become her family. I’d love some of that.

My words are insufficient…

I’m currently still recovering from medical dramas this year and struggling to find the right words to express all I need to say about Her Majesty’s Royal Coven. So I’ll quote Fiona Noble from The Guardian:

Against the backdrop of this epic fantasy world Dawson takes a razor-sharp but nuanced look at the political and social landscape of the UK, broaching everything from power structures and discrimination to feminism and transphobia. If that all sounds terribly worthy, fear not – it’s immensely readable and highly entertaining. Her writing is smart and witty, the dialogue reminiscent of gossip with a good friend, littered with nostalgic pop culture references: the bickering over who would be each Spice Girl becomes eerily significant. The world of the covens may be immersive, the social commentary highly pertinent and the combination of demons and domesticity deliciously enticing, but it is the relationships between the women, in all their gnarly complexity, that form the real meat of the novel: the messy, tender, fierce realities of friendships honed over a quarter of a century.

This excellent review reminds me I should spend more time reading well-written reviews as a form of professional development!

I love Her Majesty’s Royal Coven for the characters coming to terms with change, reaching out to one another and building community. If only there was more of that in real life! Dawson’s story unfolds like the petals of a flower revealing her characters and their backstories as the precursor to taking readers on a wild rollercoaster ride. So far this novel is my second favorite read this year: The Change by Kirsten Miller is my new favorite book of all time. To come in second only to that novel this year is a huge compliment. This novel is excellent escapism but also bibliotherapy for many; if you’ve lived life I’m sure you’ll find something to relate to in at least some of these characters. 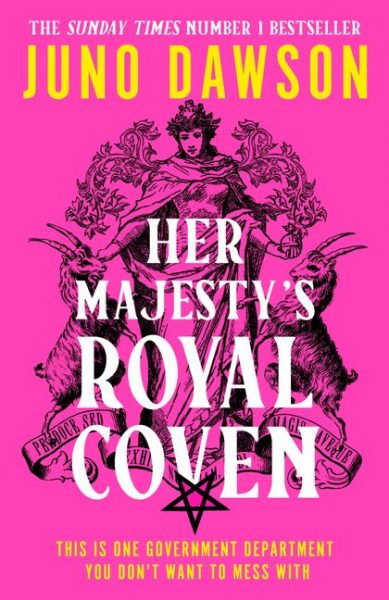